This comprehensive tree of life does not, despite claims to the contrary, truthfully track back to life’s “last common ancestor.”

At last there is an online database consolidating many evolutionary trees of life into one authoritative version. Its public unveiling was hailed in headlines, the popular press promising you could now easily find out “how related you are to a wombat . . . or an amoeba.”1 The “Open Tree of Life” is the product of a study published in Proceedings of the National Academy of Sciences (PNAS).

An editable online database, its creators consider the Open Tree of Life to be “version 1.0.” They hope it will become a Wikipedia-like resource for all. This database is the next step in the drive to make biological classification—taxonomy—reflect evolutionary beliefs about what organisms evolved from instead of what they are.

Phylogenetic trees of life are branching diagrams showing presumed evolutionary relationships. They can be based on visible similarities—phenotypes—or on genetic similarities. The Open Tree of Life team has combed through thousands of studies to collect the 484 most up-to-date trees for millions of species from microbes to man. They combine the data from these into one massive tree of life with about 2.3 million “tips.” They prefer to construct their one true all-inclusive tree based on genetic comparisons. However, of the roughly 1.8 million named species of organisms on Earth, only about 22% have had their genomes sequenced, even partially.2 This gap left its authors with lots of holes. They filled these in using trees built on the visible similarities—at least those believed to be of evolutionary significance. 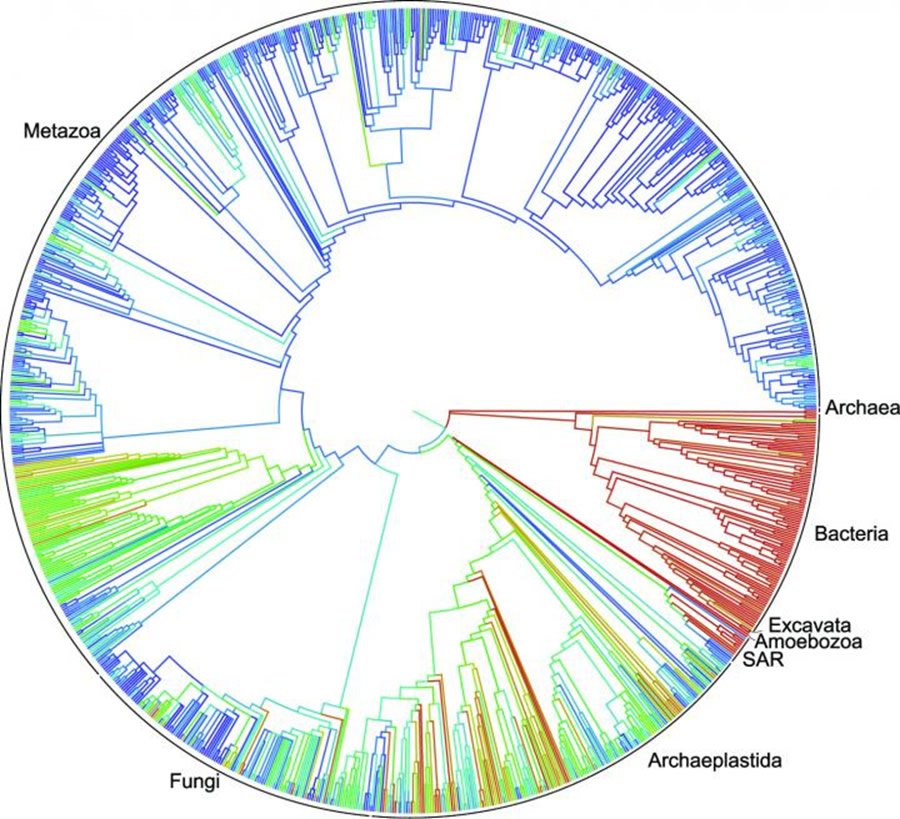 Circular for convenient viewing, the Open Tree of Life epitomizes circular reasoning. Its creators assume that all living things are products of molecules-to-man evolution. They import observations that fit their story. Those observations, however, are like still pictures in an old style animation. Only evolutionary imagination connects the dots. The Open Tree of Life simply retells the evolutionary story that spawned it on a grand scale. Image from OpenTreeOfLife.org.

One Tree to Rule Them All

Many studies the team consulted present conflicting versions of the evolutionary story. Whether building trees of life based on visible or genetic similarities or both, evolutionists still come up with different trees. How could the authors of this authoritative version of the evolutionary story deal with this problem? First of all, they decided that some published trees are simply wrong because they do not “reflect community consensus.”3 Those they ignored. 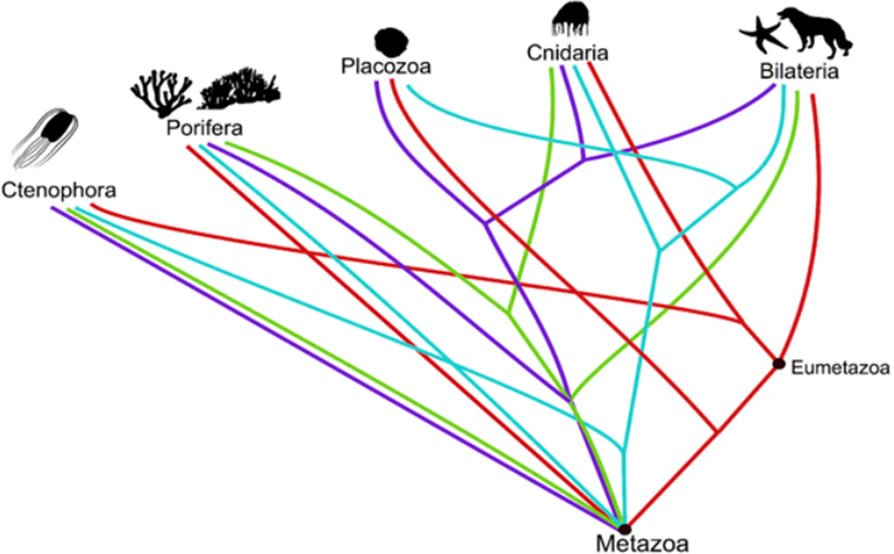 This simplified illustration shows an example of conflicting versions of the evolutionary tree of life. Creators of the Open Tree of Life selected from contradictory evolutionary interpretations. Image from Hinchliff et al., via PNAS.4

That still left a veritable forest of contradictory trees from mainstream evolutionists reflecting competing notions of evolutionary descent. The team decided to choose one version of each conflicting evolutionary story but to keep an accessible record of all the alternative points of view in the database. That way web visitors can choose the version of “how-closely-are-you-related-to-a-whatever” they prefer.

Trees of life are based on characteristics evolutionary scientists believe organisms inherited, with or without modification, from ancient ancestors. However, many features do not fit on a tree of life. Eyes are a great example, being found in such diverse life forms that evolutionists cannot track them back to a single evolutionary breakthrough. (See Evolution: The Eyes Don’t Have It to learn more.) Evolutionary scientists make judgment calls about which traits were inherited—derived—and which evolved independently—convergently.

Convergent evolution is the junk box where organisms and traits that do not fit evolutionists’ notions of how the tree of life branched can be conveniently explained away. It is the notion that organisms in divergent lineages evolved the same traits in answer to similar needs. This suggests that random natural processes respond to environmental challenges by generating the same new information over and over again. This would be a particularly impressive feat given that observational biology has never demonstrated how an organism could evolve the new genetic information to become a different kind of organism even once.

Modifications of existing genes cannot explain the biodiversity in the world. Bible-believing scientists have said this all along—“Are Mutations Part of the “Engine” of Evolution?”—but many evolutionists are waking to this reality. “If new parts only come from old parts, we would not be able to explain fundamental changes in development,” explains University of Münster bioinformatician Bornberg-Bauer in a recent Scientific American article, “A Surprise Source of Life’s Code.”5 The article asserts that life’s most vital evolutionary innovations have resulted from new genes regularly springing into existence during life’s long history.

Scientists are discovering more and more genes with no traceable path through the genomes of “related” organisms. These so-called “orphan genes” have no apparent track record in Earth’s known genomes. And, Bornberg-Bauer says, “It seems like these novel genes are often the most important ones,” the ones essential for survival.6

Where could novel genetic information come from? A controversial proposed mechanism involves rampant random mutations in bits of junk DNA. “Yet creating a gene from a random DNA sequence appears as likely as dumping a jar of Scrabble tiles onto the floor and expecting the letters to spell out a coherent sentence,” science writer Emily Singer admits. “The junk DNA must accumulate mutations that allow it to be read by the cell or converted into RNA, as well as regulatory components that signify when and where the gene should be active. And like a sentence, the gene must have a beginning and an end—short codes that signal its start and end.”7

If this Scrabble-theory of evolution strains your credulity, it should. Frankly, the frequency with which species-specific genes are now being discovered—600 newly identified human-specific genes in one recent study alone8—affirms a biblical creationist worldview much more than an evolutionary one.

In any case, the Open Tree of Life is able to ignore the many “convergent” traits and “orphan genes.” Instead, it is based on genes and phenotypes evolutionists deem to have been passed down during the past 3.5 billion years.

Faith in the Fallible

The Open Tree of Life was constructed in good faith by its authors. “There's a pretty big gap between the sum of what scientists know about how living things are related, and what's actually available digitally,” explains team leader Karen Cranston.9 Scientific data is never complete, and new data often changes what “we know to be true from science.” Yet “faith” is an appropriate word to use here.

The Open Tree of Life represents a “faith” that rejects our Creator’s eyewitness account of our origins as recorded in Genesis in favor of fallible man’s unverifiable belief that random natural processes produced life and all the biodiversity around us. Scientists can only describe and compare organisms and their genes. “What scientists know about how living things are related” is not knowledge but an evolutionary interpretation of observable data. It remains for the evolutionary imagination to create the illusion of an evolutionary continuum reaching across millions of years.

The foundational assumption for the Open Tree of Life is stated in the opening sentence of the PNAS paper: “The realization that all organisms on Earth are related by common descent was one of the most profound insights in scientific history.”10

This presumption, this “profound insight,” is unverifiable. The origin of life was not witnessed by any scientist and is outside the reach of the scientific method. This presumption is also scientifically untenable. No mechanism for changing one kind of organism into a new and different kind of organism has ever been seen in experimental biology. This “insight” is a worldview-based assumption that common designs, even in genes, are the footprints of common ancestry rather than the signature of a Common Designer, our Creator.

Our Creator used similar genes to produce similar proteins in many different kinds of organisms. After all, living things depend on the same basic biochemistry and share the same basic requirements for life. Common designs—whether genetic, biochemical, anatomic, or physiological—are exactly what we would expect from a wise Creator.

Some similarities, however, may be overstated. For an excellent discussion of an example, see Answers in Genesis research biologist Dr. Nathaniel Jeanson’s discussion of “Differences Between Chimp and Human DNA Recalculated.” Given the limitations and bias built into some genetic analyses, even the similarities on which the Open Tree of Life is based are in some cases suspect.

There are about 1.8 million named species and many unnamed ones. While the Creator God created all kinds of living things in the space of just a couple of days about 6,000 years ago—and we have His own Word on that!—Bible-believing scientists do not suggest He created over 1.8 million different kinds of organisms. We infer from Genesis 1 that the living things He created would reproduce after their kinds. And that is exactly what biologists observe them doing: reproducing and varying—sometimes varying quite a bit—within created kinds.

Between the variation that God placed within the genomes He created and the variations that have developed due to mutations, inbreeding, natural selection, and other ordinary genetic mechanisms in the last 6,000 years, many varieties and species have been produced. Biological observations show that none of these processes create the new information to evolve completely new kinds of organisms. (Learn more in “Bacteria’s Unique Design—Pooling Resources,” “Variety Within Created Kinds,” “Fixity of Species,” and “What Are the ‘Kinds’ in Genesis?”)

The creators of the Open Tree of Life have invested much time and $5.76 million from the United States National Science Foundation to compile this database. They say it will have many useful applications. However, by focusing on traits deemed evolutionarily significant, the Open Tree of Life could blind investigators to practical applications based on the fact that organisms from very different presumed lineages often share common features. (See “Can Evolutionary Clues Cure Cancer?,” “Do Medical Schools Need To Teach More Evolution?,” “Evolution—The Least Important Topic in Medicine,” and “Editorial Exhorts Veterinarians and Physicians to Embrace Evolution” for perspectives on how this issue applies to medical science.)

It is the common designs our Creator, like a wise engineer, has used in many different sorts of organisms that not only make the world’s ecological systems function through the interdependence of many living things, but also make many medical and biological breakthroughs possible. We don’t owe those discoveries to our evolutionary relationships to mice, monkeys, and microbes but to the wisdom of our Creator.

Previous Article Neanderthals, Like Other Humans, Heated Water, and Organized Their Homes Next Article Did Humans Walk Like Chimps Up the Evolutionary Tree?