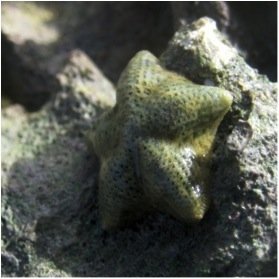 Cryptasterina hystera is a species of cushion star. Unlike its look-alike, Cryptasterina pentagona, C. hystera is a hermaphrodite, able to avoid extinction even when its population is low by fertilizing itself and sheltering larvae within its body as they develop. This system has the potential disadvantage of reducing the genetic diversity within the population’s gene pool, but may keep the population alive. And historically, by limiting the input of other starfish to its gene pool, the C. hystera’s “genetic isolation” and speciation were likely hastened. Image from www.ScientificAmerican.com

Two species of plump bluish-green Cryptasterina sea stars, similar in appearance, thrive in Australian waters. As distinct species they do not interbreed. In fact, they do not even breed the same way! Their distinctions have prompted a group of evolutionary biologists to analyze their DNA in an effort to decipher their evolutionary history. Researchers were surprised to learn that they diverged from each other rapidly and recently.

Cryptasterina pentagona and Cryptasterina hystera are genetically very similar. Analysis of their nuclear and mitochondrial DNA suggests they diverged from a common ancestral sea star about 6,000 years ago. The researchers acknowledge some uncertainty, since the mutation rate in the past cannot really be known. Nevertheless, the evolutionary biologists are pretty confident these sea stars went their separate ways—metaphorically speaking—between 1,000 and 20,000 years ago.

For such a dramatic change in the manner of reproduction, “even 20,000 years is still stupidly fast,” says Richard K. Grosberg, co-author of the study published in July’s Proceedings of the Royal Society B. Commenting on the speed of the divergence, Chicago evolutionary biologist Jerry Coyne said, “I’m amazed that quite a change occurred in such a short period of time.”

So what’s the dramatic difference? One of these species, C. pentagona, has both male and females forms and reproduces by broadcasting both male and female gametes into the water where fertilization happens as they float around in proximity to each other. That is the way most starfish reproduce, and the larva drift until they are ready to settle down as adult starfish. C. hystera, on the other hand, is a hermaphrodite that fertilizes itself and then keeps the larvae in its body until they reach adulthood.

Of course, there is no way to know for certain that this happened, but recent research with lizards and snakes has shown that parthenogenesis occurs as a reproductive strategy to deal with such conditions in those animals.

The researchers suspect the ancestral star reproduced in the typical way, by broadcasting gametes into the water. That method of reproduction requires male and female starfish to be somewhere in the same vicinity if success is to be achieved. The researchers hypothesize that a localized decreased population density may have favored the alternate form of reproduction, and relative isolation of the hermaphrodites allowed differences to concentrate until the separate species ceased to cross-breed. Of course, there is no way to know for certain that this happened, but recent research with lizards and snakes has shown that parthenogenesis (females cloning themselves) occurs as a reproductive strategy to deal with such conditions in those animals.

So does this discovery demonstrate that molecules-to-man evolution not only happens but might happen more quickly than supposed? Actually, no. Nothing about this discovery has anything to do with molecules-to-man evolution, the phrase we use to refer to the evolution of one kind of creature into another. No new genetic information to transform into a non-starfish was being obtained. In fact, starfish demonstrate a variety of reproductive strategies ranging from asexual reproduction to sexual reproduction using the “broadcast” strategy to sexual reproduction as with these hermaphrodites. Some species are even sequential hermaphrodites, actually switching genders periodically, thus maintaining sources of both male and female gametes in the population. This suggests the genetic potential for these variations existed within these invertebrates from creation.

Speciation is generally associated with isolation of organisms whose traits are favored under certain circumstances, such as a low population among starfish with the genetic information to function as hermaphrodites. Through the process of natural selection (and other processes), those equipped to function best under the circumstances have an advantage favoring their survival and reproduction, so that the population soon exhibits those characteristics. But the starfish are still reproducing after their kind, just as God designed them to do. No evolutionary power is being demonstrated here.