Evolutionists claim to have demonstrated the evolution of a new function through gene duplication.

How can an old gene learn new tricks? That has long been a problem for evolutionists trying to explain how increasing genetic complexity evolved. Despite implicit faith that “gene duplications allow evolution of genes with new functions,”1 no one has actually shown how that could happen. Now, scientists from Sweden’s Uppsala University and the University of California, Davis, believe that they have witnessed just such evolution of a novel genetic function.

Because some random mutations involve gene duplications, geneticist Susumu Ohno in 1970 suggested that duplicate copies of genes acquired new and useful functions, got enhanced by natural selection, and added to the genetic complexity of evolving organisms.

Because some random mutations involve gene duplications, geneticist Susumu Ohno in 1970 suggested that duplicate copies of genes acquired new and useful functions, got enhanced by natural selection, and added to the genetic complexity of evolving organisms. Since mutations are generally not helpful, however, evolutionists have had a hard time showing how they could survive the process of natural selection long enough to become useful. Since mutations actually don’t add any new information, they have also had a hard time coming up with any examples to demonstrate how copies of old genes could acquire new functions. 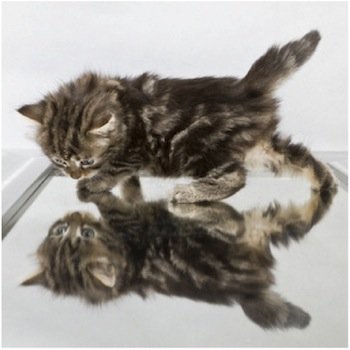 Mirror, mirror, what a spare! Some mutations involve duplication of genes. Evolutionary geneticists have long suggested that such duplicates could randomly mutate until they acquired new functions without any loss or harm to the original organism. Yet like this kitty’s copycat, a copy contains no new information. Furthermore, mutations within a copy can degrade the information it contains, but not produce new information. Some scientists now claim they have seen gene duplicates develop new functions, a necessary pre-requisite to the evolutionary scenario. However, they have not. Image credit: Christian Holmér (CC) via flickr from www.scientificamerican.com.

To get around this problem, John Roth, Dan Andersson, and their colleagues decided to assume that the useful function to be “acquired” was already present and only needed to be amplified by time, chance, and natural selection. Many genes have multiple functions. In their model, they chose a strain of the bacteria Salmonella that had lost the main gene needed to make the amino acid tryptophan. However, the bacteria had another gene, one for making the amino acid histidine, which was also able to produce tryptophan, albeit weakly. They grew the bacteria in a tryptophan-deprived environment for 3,000 generations and discovered that the surviving population had multiple copies of the “dual-function gene.”2 Those with duplication mutations had been favored for survival because they had greater ability to make the tryptophan they needed.

Microbial evolutionary biochemist Antony Dean of the University of Minnesota, Twin Cities, commenting on the discovery, said, “Ohno will go down as a very important historical figure, but Andersson has the new model for how genes duplicate. His theory is square one.”3

The main problem with using this discovery to support evolutionary theory is that no new function actually came into existence. The dual-function gene already existed in the organism. The genetic information was not new; it was already there. Natural selection in the tryptophan-deprived environment favored the survival and reproduction of those bacteria that had multiple copies of the gene, but no novel function had to evolve. The original bacteria already had a redundant way to make tryptophan.

These bacteria did not evolve an innovation. They did not acquire new genetic information, as duplication of an existing gene is nothing new. They did not even do anything new or innovative with old information. All they did was experience a duplication mutation that allowed them to efficiently express an existing ability to manufacture tryptophan.

Cornell University evolutionary geneticist Richard Meisel cautions that this evolutionary mechanism may be limited to bacteria and viruses,4 which brings up another rather obvious point: nothing about this discovery provides a mechanism for Salmonella to become any new kind of more complex organism, only another variety of Salmonella. Mutations—even duplications that provide extra copies of something useful—do not provide new genetic information or the raw material that “moves bacteria in an upward evolutionary direction.”