“Flower of the sea” is said to contain an evolutionary link between plants and animals.

The ghost of a deep ancestral past that goes back to before plants and animals presumably diverged has been found in the sea anemone, according to researchers from the University of Vienna. Sharing genomic regulatory elements with both trunks on the tree of life, the sea anemone may have earned its nickname, “flower of the sea,” quite literally.

Reporting in the journal Genome Research, a team led by Ulrich Technau has been investigating the complex genome of the comparatively simple animal, the sea anemone, to see if perhaps the evolution of gene regulation rather than just the evolution of genes can explain molecules-to-man evolution.

Too Complex to Be Simple

Despite claims that simple organisms are primitive, genetic research has discovered that even anatomically “simple” organisms ostensibly low on the evolutionary ladder often have large and complex genomes. The sea anemone is one such example. So evolutionists are left with trying to determine what makes one organism on the tree of life more highly evolved than another.

Since we know (also from modern genetics) that gene expression is regulated, evolutionists have suggested that it isn’t just the genes that evolved but the regulatory elements that evolved to make organisms what they are. Many regulatory elements are encoded in the genome itself. Maybe it wasn’t the acquisition of genetic information, they speculate, that made evolution happen but rather acquisition of more complex ways of regulating the information that had evolved that did the trick. A sort of evolutionary advancement by administrative fiat! 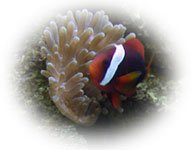 The genomic regulatory elements of this sea anemone, Nematostella vectensis, include some transcription-regulating factors that resemble those found in other animals and some post-transcriptional regulators that resemble those found in plants. While the sea anemone’s nickname “flower of the sea” is particularly appropriate given its general appearance, the sea anemone is clearly an animal. Image: Nature, 2005, through ScienceDaily 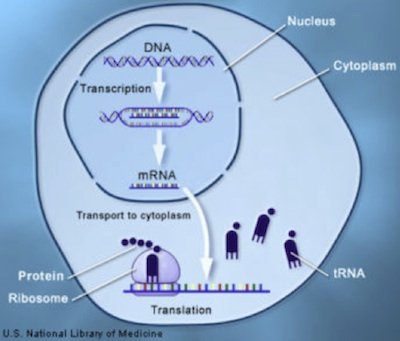 Genes are modular instructions encoded into DNA. They carry information for how to build protein molecules as well as many regulatory elements that determine how and when that information is used. Genes in the nucleus are copied (transcribed) onto pieces of messenger RNA (mRNA); in this way, the cell’s DNA sends out a “work order” to manufacture some proteins. This “work order”—the mRNA—is transported to the cell’s cytoplasm where the message is translated by a ribosome and the protein molecules are manufactured. Image: U.S. National Library of Medicine 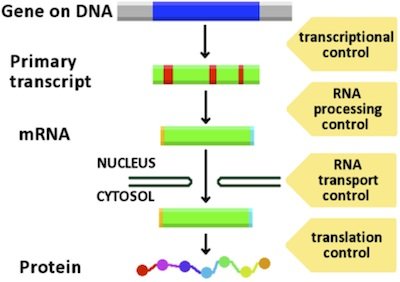 In order to fine-tune the protein-making process to fit a cell’s precise needs, many levels of control exist in the DNA-RNA-protein–making process. A complex combination of gene enhancers, promoters, silencers, and repressors that regulate which genes get transcribed into RNA in the first place. Even after messenger RNA is produced, it can be targeted and silenced or destroyed by microRNA before it ever gets translated. This is known as “translation control” or “post-transcriptional control.” Image: ArneLH through Wikipedia

The genomes of all plants and animals have built-in ways to regulate which genes get expressed and when. Some of these regulatory functions are carried out by a complex arrangement of gene enhancers, promoters, silencers, and repressors that regulate which genes get transcribed into RNA in the first place. Other “post-transcriptional” regulation takes place after RNA is transcribed but before it is translated into protein molecules. Post-transcriptional regulators include short pieces of RNA called microRNA. These regulatory elements fine-tune the proteins needed for metabolism and development of an organism—whether plant, animal, or human—to its immediate needs.

To test whether evolution of genetic regulation could explain the differences between organisms, Technau’s team mapped the regulatory elements of the sea anemone Nematostella vectensis. This species of sea anemone (pictured) is the first radially symmetrical animal to be so mapped. They found over 5000 gene enhancers1 and 87 microRNAs. Gene enhancers are involved in regulating which genes get transcribed into RNA copies. MicroRNA regulates whether those RNA copies actually get used to build proteins or not. Technae and colleagues found that the sea anemone’s gene regulators are just as complex and numerous as those of “higher” more complex organisms.

The sea anemone’s gene enhancers regulated DNA transcription the same way they do in bilaterally symmetrical animals. (They modified the same sorts of histones.2 Histones are spool-like proteins around which DNA is wrapped; they regulate the availability of the DNA for transcription into RNA.) And like other animals, the sea anemone’s gene enhancer system seemed to be mostly focused on genes involved in development. Thus, this aspect of the sea anemone’s genetic regulatory system is organized in much the same way as that of other animals despite radical differences in body plan.

“Since the sea anemone shows a complex landscape of gene regulatory elements similar to the fruit fly or other model animals, we believe that this principle of complex gene regulation was already present in the common ancestor of human, fly and sea anemone some 600 million years ago,” explains lead author Michaela Schwaiger.

The sea anemone has post-transcriptional gene regulation that is more similar to that seen in plants than to that in animals. MicroRNAs are post-transcriptional regulatory elements found in plants, animals, and people. The human genome is thought to contain the blueprint for making about 1000 such microRNAs. Technau explains, “We assume that 30-50 percent of all human genes are regulated by microRNAs.” (Incidentally, mutations in microRNA are even associated with some cancers, a disease associated with runaway cellular activity. Furthermore, because of their regulatory role, microRNAs are being investigated as possible ways to treat cancers.3)

Most exciting to the researchers, one of the sea anemone’s microRNAs has a nucleotide sequence similar to one known from plants, and another has a sequence similar to one known from animals. The evolutionary researchers therefore believe this discovery demonstrates a very early shared ancestry for plants and animals. The great differences between the genetic regulatory systems of plants and animals, they believe, illustrate that genetic regulatory mechanisms evolved independently in plants and animals after they diverged from their common ancestor.

Some Things Molecules Cannot Do

Molecules of DNA never mutate in such a way that they create the information needed to produce new, more complex kind of creatures.

What evolutionists cannot explain (among other things) is how the information in genes came to exist in the first place or how any organism can acquire the genetic information to become a more complex kind of animal—something that has never been experimentally observed. Evolutionists claim that accumulated mutations add the information needed to become something new and different. But—as we discussed in our review of the most recent episode of “Cosmos: A SpaceTime Odyssey,”—this is actually something that molecules never do. Molecules of DNA never mutate in such a way that they create the information needed to produce and new, more complex kind of creatures. Mutations, by their nature, cannot fuel molecules-to-man evolution.

As with the rest of the genome, evolutionists are unable to explain how the information in microRNAs came to exist, but of course they assume that it arose in a mysterious common ancestor. The popular press is praising the discovery that the “principle of gene regulation is already 600 million years old and dates back to the common ancestor of human, fly and sea anemone.” Actually the principle of gene regulation dates back about 6,000 years to the common Designer of all life and all things.

Many news articles have declared that the sea anemone is “half-plant, half-animal.” For instance, LiveScience reports, “The sea anemone is an oddball: half-plant and half-animal, at least when it comes to its genetic code. . . . The sea creature's genes look more like those of animals, but the regulatory code that determines whether those genes are expressed resembles that in plants.”4 The fact that the DNA of the sea anemone has genes like animals that are partially regulated like the genes in plants does not mean the sea anemone is “half-plant, half-animal.” The sea anemone is rightly considered an animal rather than a plant—or even a half-plant, which is a non-existent entity—due to its many characteristics that fit our definition of animal and its lack of characteristics that fit the definition of plant. This invertebrate must obtain its food rather than photosynthesize it as plants do. Its cells lack the characteristics of plant cells, and it does not take in carbon dioxide as plants do. Like other animals, the sea anemone has a sort of nervous system, is able to move its tentacles using muscle-like cells and it digests its food like animals do. The sea anemone’s life cycle consists of the same sorts of stages as other cnidarians like coral and jellyfish. Having a few plant-like regulatory elements in its genome does not change or blur the category into which biologists should place it. Neither does it lend support to the experimentally insupportable notion of common evolutionary ancestry.

The researchers interpret their findings in accord with their unverifiable and experimentally unsupported notion that all life evolved from a common ancestor. The same experimental data, seen through the eyes of the only available historical record—God’s eyewitness account in the Bible—makes sense of the data without resorting to biologically untenable fairy tales. God reports in His Word that He created all kinds of living things during Creation Week about 6,000 years ago, and that He created them to reproduce only within their created kinds. This is exactly what we observe in biology. Thus it is no surprise that our Creator’s common designs include the principles of genetic regulation that stretch across all kinds of created living things.