Evolution of Snake Venom: A New Use for Old Genes?

King cobras prey on snakes, lizards, rodents, and birds in the forests of India and Southeast Asia after immobilizing them with deadly venom. Humans can die from king cobra venom in as little as 30 minutes. Just two-tenths of an ounce can kill an elephant.1 How did such powerful snake venom come to be?

Snake venom is not a single substance but a cocktail of proteins encoded by many different genes. The proteins, which work together to incapacitate the victim, are produced in the main venom gland—a modified salivary gland located behind the eyes—and also in an accessory venom gland of hitherto unknown function. The deadly brew is injected through the fangs.

Hoping to gain insight into the puzzling evolution of such “complex biological weapon systems”2 Nicholas Casewell and colleagues sequenced the king cobra’s genome. The genetic information responsible for the king cobra’s venom, they found, also produces non-venom-related products throughout the snake’s body.

Casewell suspects snake venom originated when variations in existing genetic material—duplications and other mutations—produced toxic products. Snakes expressing such genetic variations in their salivary glands would have been better able to capture dinner. The biologists believe this “coevolutionary arms race between venomous snakes and their prey”3 shaped the evolution of snake venom and the evolution of snakes. 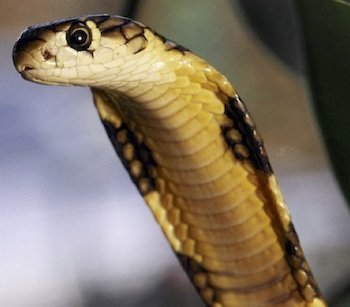 The king cobra (Ophiophagus hannah) is the world’s longest venomous snake and the choice companion of snake charmers. It grows 18 feet long but can still lift its hooded head and a third of its body to the vertical while moving forward. Comparison of the genomes of the king cobra with the Burmese python and other vertebrates reveals that the snakes have duplicate copies of lots of genes that ordinarily produce nontoxic products. Biologists think that mutations such as duplication of these “good” genes led to the production of toxins now found in snake venom. Image: Mattias Klum in “King Cobra” in National Geographic

Genes encoding venom proteins are located at multiple locations in the king cobra’s genome. They include duplicate copies of genes that produce nontoxic proteins in the stomach, spleen, testes, and ovaries.4 Even regulatory genes associated with expression of the venom-producing genes are responsible for benign functions in other organs such as the pancreas.

The pancreas, like a modified salivary gland, is a secretory organ. The possibility that snake venom glands are “part of a core genetic network regulating secretion that has been co-opted during the evolution of the snake venom gland from an ancestral role in the pancreas and foregut secretory cells,”5 is consistent with their results, the researchers write, saying their work “highlights an inherent link between these two secretory tissues.”6

“There are four main gene families that create venom proteins in the King Cobra, and they have all expanded hugely compared to other parts of the genome,” Casewell explains. “Many of these genes have been duplicated many times. It could be that this just lets the snake deliver more of the same toxins, but it's also highly likely that these duplications led to the evolution of new functions. We think it's probably a combination of these two factors.”

Such gene duplicates may have persisted in the genome of venomous snakes, the authors suggest, because toxins produced when those genes were expressed in the salivary and accessory glands provided selective advantages in obtaining prey. Venom-assisted predation, the researchers believe, was a strong factor in the evolution of snakes.

But snakes they were and snakes they remained. Nothing in the study demonstrates otherwise.

The authors liken the evolution of snake venom and the coevolution of venom resistance in snakes’ prey to a biological arms race. Animals able to survive bites may produce a resistant prey population. And different kinds of animals vary in their vulnerability to the venom’s components, making the development of new toxins a priority for predators. Researchers suggest that by co-opting more and more genes for the production of more and more toxins, snakes like the king cobra’s ancestors stayed a step ahead of their prey and produced increasingly complex biological weapons. Casewell says, “It’s almost certainly a balance of factors around the snake's diet and the resistance of its prey that determines the complexity of its venom and the speed with which it evolves.”

Incidentally, nothing in the study reveals any mechanism by which any sort of animal can evolve into a new kind of animal. The scenarios described by the authors are simply renditions of how variations within created kinds of animals can be acted on through natural selection and other mechanisms to produce populations with particular characteristics. Like speculation discussed in “Did Snakes Shape Our Brains?” nothing in these discoveries demonstrates any actual scientific observations associated with molecules-to-man evolution.

Snakebites are a major cause of death in the tropics. The components of snake venom vary, especially across species. The complexity and variety of snake venom makes the development of effective antivenom a challenge. Currently antivenom is made from antibodies produced by animals injected with dilute snake venoms. Researchers hope that by learning more about the venom components of other groups of snakes, such as those in the viper family, and comparing that information to what they have learned about the king cobra, they will understand which components are the most common and the most toxic and be able to intelligently synthesize antivenom effective against bites from a wider range of snakes.

Transformed Toxins In A Sin-Cursed World

Mamba venom, like cobra venom, contains venomous versions of physiologically active molecules. Mamba venom even contains nontoxic components with pain-killing properties. This pattern is also found in lizards, even those not considered venomous, though they may use those substances to their advantage against their prey.8 Non-venomous snakes also are known to have genes for nontoxic versions of the toxins found in snake venom.

From a biblical perspective, the fact that snake venom components are produced through variation and duplication of the genetic information that encodes harmless substances makes sense. When God created all kinds of animals and plants about 6,000 years ago, He created them to reproduce after their kinds and provided them with the genetic potential to vary. Yet He also created them in a perfect, nonviolent, uncursed world devoid of either animal or human death. God described the world He created as “very good” (Genesis 1:31). After Adam’s sin brought a divine curse upon all of creation, many “defense and attack structures” developed. In the case of venom, discoveries like these demonstrate that only variations in pre-existing genetic information were needed in order to develop venom.

Nothing New Under The Sun

Evolutionists consider gene duplication and its sometimes useful phenotypic effects to be an example of the evolution of new genetic information of the type necessary for molecules-to-man evolution. A commonly cited example of such “evolution of novelty” is Richard Lenski’s claim that E. coli bacteria in his laboratory evolved novel gene functions when gene duplication improved their already-existing ability to feed on citrate. Molecular geneticist Dr. Georgia Purdom of Answers in Genesis, commenting on Lenski’s claims that the adaptive genetic acrobatics he’d observed were evolution-in-action, said, “Lenski discovered that due to the duplication and rearrangement of pre-existing information, E. coli cultured in the lab for multiple generations could use citrate in the presence of abundant oxygen. This is a far cry from the key innovation he claims.” The same is true of duplicate copies of the genes that, when expressed in the snake venom gland, have a toxic product.

Copies of existing information, like mutations, do not result in genetic changes of the type necessary for molecules-to-man evolution. Gene duplication may alter the properties of existing biologically active proteins in an organism. This may destroy a molecule’s function, or alter its properties in a way that ultimately serves other purposes in an organism. But this process does not produce new kinds of organisms. If snake venom arose from genetic variations like duplications, it was still just a useful phenotypic variation in existing kinds of organisms. But snakes they were and snakes they remained. Nothing in the study demonstrates otherwise.

Knowing the genetic underpinnings of snake venom may help medical researchers come up with more effective antivenom formulations and thus reduce the scourge of snakebite death. Furthermore, the co-opting of physiologically useful molecules as toxins through gene duplication explains how deadly snake venom may have developed in the descendants of the original created kinds of snakes God made about 6,000 years ago. But the development of such defense and attack structures after the Curse of Adam’s sin made this a world of suffering and death is only variation within created kinds, not evolution of new more complex kinds of animals.

Understanding from studies like this how venom is produced and how it works should help medical researchers come up with solutions to save the lives of snakebite victims. Understanding from the Bible how man’s sin brought both physical and spiritual suffering and death into the world, analogously, helps people understand the reason Jesus Christ, the Son of God, entered this world and died on the Cross to save people from sin’s corruption, guilt, and death and to provide the abundant life that our loving Creator wishes us to have.