Horseshoe crab’s death march into the pages of history is consistent with the Genesis account of the global Flood.

A fossilized trackway memorializing the death march of a horseshoe crab—the longest known such fossil—is back in the news. Found in 2002 in Bavaria, Germany, in the same region as the famous Archaeopteryx fossil, the tracks begin abruptly, meander along for about 32 feet, and end with the fossilized track-maker “himself.” Investigators now report in Ichnos: An International Journal for Plant and Animal Traces their proposed scenario for the creature’s final moments of life, but questions remain. As we often point out, the answers are in Genesis.

This fossil of a juvenile Mesolimulus walchi horseshoe crab measures 5 inches (12.7 cm) long and 2.7 inches (6.9 cm) wide. There are many such specimens preserved with it in the Solnhofen Limestone, but this one left a record of its final moments imprinted in the mineral-rich sediment. Its presence and preservation is explained by the global Flood of Genesis. The fossil is housed at the Wyoming Dinosaur Center. Image from www.msnbc.msn.com

The trackway was found in the Solnhofen Lithographic Limestone of Bavaria. Why the tracks begin quite suddenly is a puzzler to most paleontologists. Some have proposed the creature was dropped by a flying predator into an isolated lagoon, but the authors doubt that since it shows no predation marks. The animal died at the end of the trail. After initially having a normal-appearing gait, its gait seemed erratic near the end. The authors suspect it was in some sort of distress. They therefore believe the cause of death to be a lack of oxygen.

The next question, of course, is why a horseshoe crab was strolling through anoxic waters. And although the limestone of the area is famous for its rich collection of fossils, including many soft-bodied creatures, why were none preserved with this trackway? And how did the crab and its tracks get preserved? The authors propose that a storm tossed this hapless marine bottom-dweller up into an isolated, oxygen-free, extremely salty lagoon devoid of life, whereupon it took off walking until overcome by anoxia. The presumed high salinity pickled it—preventing decay until it fossilized.

The lagoon that the animal found itself in was anoxic, so at the bottom of these lagoons there was no oxygen and nothing was living. This horseshoe crab [Mesolimulus walchi] found itself on the lagoon floor and we can tell by looking at the trace that the animal righted itself, managed to get on to its feet and began to walk. However, the anoxic conditions of the lagoon floor quickly proved fatal to the arthropod and it soon began to struggle. We started to study the specimen closer and saw that the walking patterns and the animal's behaviour started to change. The leg impressions became deeper and more erratic, the telson (the long spiny tail) started being lifted up and down, up and down, showing that the animal was really being affected by the conditions.1

The horseshoe crab is considered a living fossil since the species living today do not differ significantly from those preserved in the fossil record. The supposed “millions of years” of evolution seem to have by-passed such organisms. The proposed scenario explaining this horseshoe crab’s presence, death, and preservation fails to explain how such an isolated lagoon was close enough to catch this crab but isolated enough to keep its tracks from being disturbed in the storm. The Flood model of geology explains the findings, however, by providing the minerals and the loads of sediment needed.

Tracks can be preserved in moist mineral-rich sediment under the right conditions. Tracks, like animals themselves, must be buried rapidly to preserve them. Information about the global Flood, as described in Genesis, has enabled Bible-believing geologists to explain findings such as these. When the floodwaters were rising—something Genesis 7:17–18 documents they did for many days—there would have been surges and regressions of water under the influence of tectonic and volcanic-related seismic activity and tides. This ocean water would naturally be rich in carbonate (lime) from volcanic activity and dissolved mollusk shells from the ocean bottom. Surges of ocean water would have brought in carbonate-laden water and a great deal of sediment. This bottom-dwelling horseshoe crab and other such invertebrates preserved at Solnhofen may have arrived with this sediment.

These surges would have left behind mineral-rich sediment surfaces on which animal tracks could be made. The crab’s change in gait shortly before its demise may or may not have been related to changes in the chemical content of its environment; we cannot know the significance of the gait for certain, but the ocean water could have carried toxic chemicals related to the volcanic activity. Additional surges bearing more loads of sediment could then rapidly bury tracks set in the cement-like carbonate-rich mud, preserving the fossil impressions and occasionally the track-makers too. 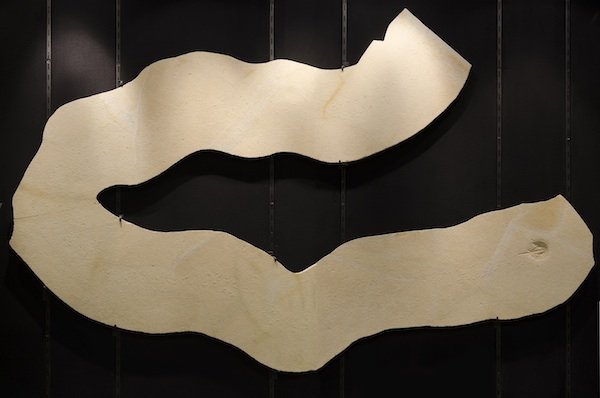 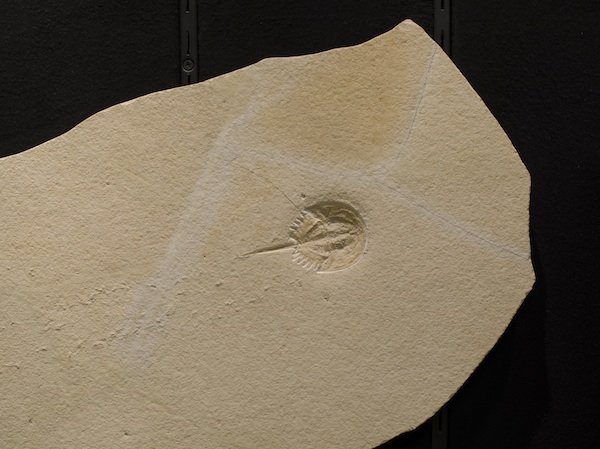 This fossilized death march of another horseshoe crab from the Solnhofen region graces the lobby of the Creation Museum in Petersburg, Kentucky. It was obtained from Upper Jurassic limestone in the Schernfeld Quarry near Solnhofen, Germany. Fossils like these form rapidly as a result of catastrophic events under certain conditions. The sign by the exhibit explains: “Here lies the last remains of a horseshoe crab, stopped dead in its tracks. The fine preservation of both body and tracks is amazing. Horseshoe crabs live on the ocean floor. Special conditions unknown in the present ocean must have quickly sealed and preserved both animal and prints. The Bible describes a unique event that may provide all the ingredients to preserve such a fine specimen—the worldwide Flood of Noah’s day. The water killed billions of animals, dumped millions of tons of sediments worldwide, and created unique chemical conditions never before seen on earth. Horseshoe crabs are ‘living fossils’ that have kept the same basic form, from fossils deep in the fossil record to species alive today. (This is a specimen of the sediment that buried the specimen, so everything is reversed like a film negative. This explains why the path is raised and animal is indented.)” Be sure to see this excellent fossil at the Creation Museum. 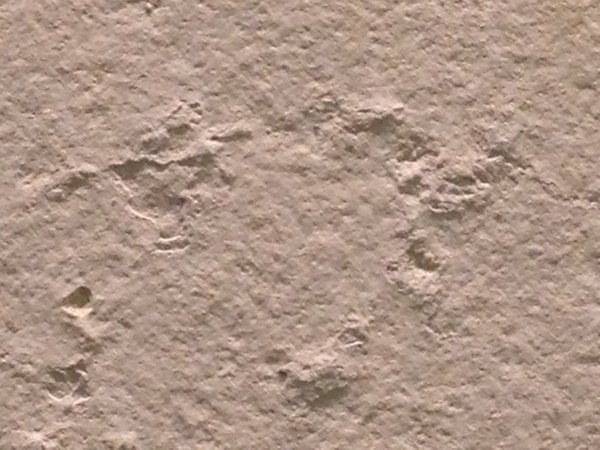 Thus, the Flood geology model drawn from a study of geology and the fossil record in the light of biblical history explains the final march of the horseshoe crab at Solnhofen.