Stromatolites—Rare Reminders of a Lost World

In a few rare spots, geologists find fossils of strange eight-foot-tall “mushrooms.” What do they tell us about the mysterious world they came from?

Have you ever stopped to wonder what the world looked like in the centuries before the Flood? Were there endless green forests like we find in the Appalachian Mountains or colorful coral reefs like the Great Barrier Reef?

When God finished creating everything and declared it “very good” (Genesis 1:31), we know the world must have been incredibly beautiful. Even after Adam disobeyed God and brought a curse on creation (Genesis 3:17–19; Romans 5:12), it must have remained a beautiful place, exploding with a variety of life forms. How do we know that?

Mass graves filled with exquisite fossils, buried as a result of the Flood, show that the pre-Flood world was teeming with life. Within today’s extensive coal layers, for instance, are the remains of luxuriant forests that once covered the landscape with trillions of towering 100-foot-tall cycads and lycopods, unlike any trees we see today. Moreover, we find a vast array of extinct clams and corals, whose diverse beauty rivals anything we see today on the ocean floor. Scientists estimate that 95% of the fossils in the rock record are shallow seafloor critters such as clams and corals. That abundance of life reflects God’s command for the waters to “swarm with swarms of living creatures” (Genesis 1:20).

But we’re not limited to clues from Flood fossils. In a few rare places, we find organisms buried sometime before the Flood. These unusual findings give us an added window into the undersea environments that once flourished but are no longer around today.

If you hike the back country of the eastern Grand Canyon, you’ll come across a field of upright mounds that look like—I’m not kidding—fossilized giant toadstools. They are lined up for nearly a mile in the eroded edge of a distinctive rock layer. These mounds average 8 feet (2.5 m) in height! What strange environment did they come from, and how did they get here? 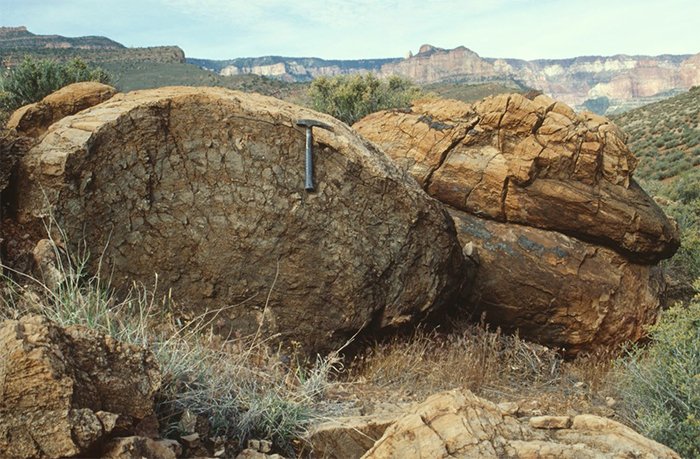 Giant stromatolite fossils in the Grand Canyon were buried in place, not ripped up and scattered around like fossils formed during the Flood. They give us a window into pre-Flood undersea environments that once flourished but are no longer around today.

The evidence strongly indicates that these mounds were buried in place, just as they once lived, before the Flood. Their orderliness doesn’t look anything like the deposits left by the Flood, when animals and plants were catastrophically ripped out of their environments and dumped helter-skelter into layers stretching across continents. These mounds, in contrast, were carefully preserved upright and all together. If the raging waters of the Flood had grabbed these top-heavy mounds, it would have toppled them and scattered them in all orientations.

Another clue that these mounds were buried prior to the Flood is that they appear in layers below the boundary at the bottom of the Flood layers. This boundary is obvious in the Grand Canyon area. The churning sediment-laden Flood waters planed off the rocks below as they ground across the continent, laying new sediments on top of a flat surface, known as an erosion surface.

So all this evidence indicates an entire environment was buried before the Flood. How could this happen?

It’s not hard to imagine how the regular flow of rivers and tides dumped enough mud and sediment into the ocean floor to bury large structures like these mounds. But how did these mounds form in the first place?

It turns out that these mounds, called stromatolites, were built by algae. We know this because we can observe their living counterparts building small mounds in a few rare places today. The best-known example is in Hamelin Pool in Shark Bay, on the central coast of Western Australia.

The culprits are blue-green algae (cyanobacteria). In warm, salty coastal waters, slimy mats grow on the seafloor sediments. As they grow, the tides wash more sediment grains onto the mats, partly burying them. The algae then secrete chemicals that bind these sediment grains together. So, while the algae are multiplying new cells on the surface, some cells get buried with the sediment grains below. They are effectively fossilized as the mat grows. 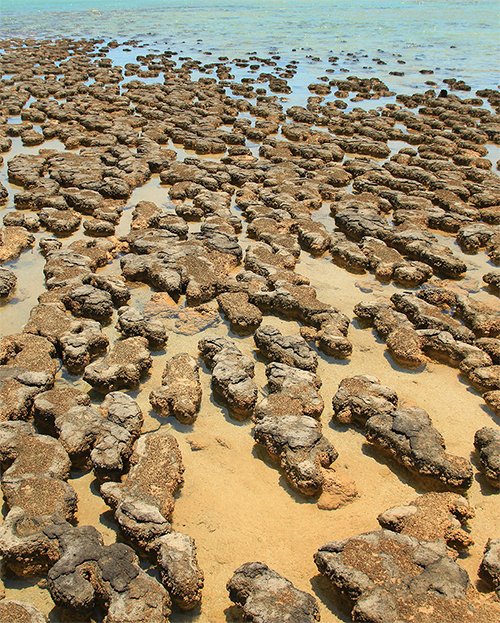 Stromatolites in Hamelin Pool in Shark Bay, on the central coast of Western Australia.

As this process continues, the mounds build. They come in a variety of shapes and sizes, from mushroom- shaped domes to columns. At the same time, ocean sediments accumulate around them, entombing the stromatolites.

Not surprisingly (to creationists), many living stromatolites are virtually identical to fossilized stromatolites. In all the supposed billions of years claimed by the evolutionary scientists since the earliest fossil stromatolites formed, these algae have stayed the same. That’s because it has been thousands of years, not billions.

There are some differences between today’s mounds and the fossil mounds, however. The fossils are much larger and lined up together in a regular pattern. How did they line up like this?

The best explanation appears to be that they were part of a reef that God placed at the edge of a shallow seafloor off the coast of the pre-Flood supercontinent. That “stromatolite reef” may have fringed the coastline as a barrier reef that enclosed a wide, shallow lagoon.

This provided a protected environment for many unusual shallow-sea creatures we find buried in the very earliest Flood layers.

Today’s stromatolites prefer warm, salty waters. So it seems reasonable to conclude that in the pre-Flood world these large mounds supported a specialized biological community. The type of sedimentary layer in which these fossil stromatolites are found provides evidence that warm salty waters were gushing from springs on the seafloor, similar to hydrothermal vents on the ocean floor today, to feed the algae in these mounds.

The Bible says the Flood began with the rupturing of the deep ocean floor (Genesis 7:11). The accompanying earthquakes would have sent surges of water driving towards the shallow coastal seas. First to be destroyed would have been the fringing stromatolite reefs before the water moved closer to the coast. Their broken remains were buried before any of the lagoon-dwelling creatures.

Today’s living stromatolites are rare. That suggests it was difficult for stromatolites to re-colonize the post-Flood earth because they required a specialized spring-fed habitat that did not reappear after the Flood.

Sadly, today’s world does not have the biologic diversity and population density that the pre-Flood world must have had. Man’s sin brought judgment and permanent loss.

Yet we still live in a beautiful world that reveals to us our Creator’s power and majesty. Even the humble algal mats that build stromatolites on Australia’s coast continue to declare his handiwork.

“O Lord, how manifold are your works! In wisdom have you made them all; the earth is full of your creatures” (Psalm 104:24).

Dr. Andrew Snelling holds a PhD in geology from the University of Sydney and has worked as a consultant research geologist in both Australia and America. Author of numerous scientific articles, Dr. Snelling is now director of research at Answers in Genesis–US.
Previous Article Science in Perspective: Quick Takes Next Article Redrawing the Dinosaur Family Tree

The Creator equipped numerous animals with astonishing tools to find their way as they migrate around the world.