Santana Fossils—Delighting in the Details

Dr. Gabriela Haynes recounts her experience studying the Santana Formation in Brazil and how it highlights the catastrophic effects of the global flood in South America.

The fine details preserved in fossils mystify evolutionists but not paleontologists who believe in the Genesis flood.

One of my first assignments when I attended college in Brazil involved fossils. We had to write and present a paper about the astonishing mix of well-preserved dinosaurs, pterosaurs, fish, and insects buried in my native country’s famous Santana Formation. Since I was a teenager, I had heard about them, and here I was as an undergrad, about to study those fossils closely. I was excited.

As the director of the museum showed us the fossils, he kept talking about their age, around 120 million years old. He believed in evolution and millions of years, but at the same time he was showing how many fine details have been preserved, such as skin, muscles, colors, hair, food in their stomachs, and even blood cells. That amazed me!

The preservation of fine details is what has made Santana so famous. Every time I took a field trip, I especially looked for my favorite fossil, fish. You can see their little bones and their fins as though they had been buried yesterday. More than that, Santana is famous for the sheer quantity of fish, which many scientists admit must have died and been preserved in mass graves by rare catastrophic conditions, such as the sudden release of toxic chemicals in the sediment or bacterial blooms. Some studies also suggest that changes in the concentration of salt or oxygen in the water may be factors.

During my last year of college, I started working at a geologic park, and again I was surrounded by fossils from the Santana Formation. I realized that this formation is what the Lord wanted me to study. As a biblical creationist working in a field filled with evolutionary assumptions, I felt a burden to dig up the wonderful truths these fossils teach us about the catastrophic effects of God’s judgment during the worldwide flood recorded in Scripture.

The Santana Formation is one of the most-sought-after paleontological sites in the world because of the beautiful preservation of so many different kinds of plants, insects, fish, dinosaurs, pterosaurs, birds, and other life forms. For example, the Santana Formation has a relative of the famous Tyrannosaurus rex dinosaur. Its name is Santanaraptor placidus.

There are so many different kinds of creatures that for my master’s program I needed to narrow down which group to study. I decided to research a vast group called Hymenoptera, which includes wasps, ants, and bees. They became my new favorite. (It seems I have many favorites.) They may be very small, but they display astonishingly fine details. Veins, the name given to the lines and traces that mark the wings, are so visible that even in cases where those lines are not grooved into the rock, they are gently pressed on it so you can still see the impressions. Those lines and traces help us classify the insects with great precision. 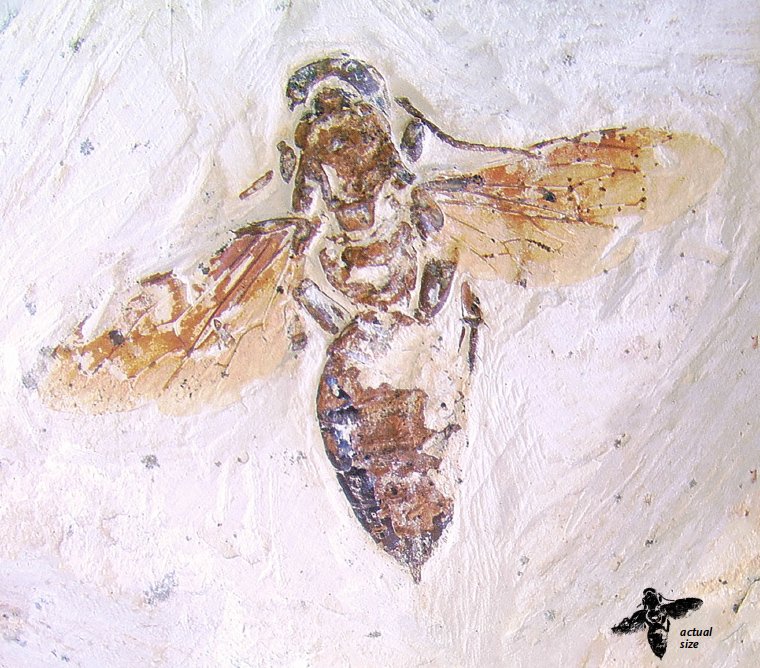 Tiny insects like this wasp from the family Tiphiidae are preserved in exquisite detail in Brazil’s Santana Formation.

For example, when I am studying some of the wasps, I can see the veins, wrinkles, punctuations (little dots on their body), hair, colored wings, flagellomeres (tiny pieces that form the antenna), spines, and spurs on the leg. You can see some of those characteristics without a magnifying glass, but to see other details you need a special microscope.

The preservation of these tiny fossils amazes everybody in the field, even the scientists who see them all the time. They understand the specimens must have been preserved by rapid burial because the animals and plants didn’t have time to go through the normal body decay process. For example, a study on cockroaches found they can’t stay intact after 48 hours in a water environment. Water starts destroying their structures right away.

Secular scientists don’t know how so many insects could be preserved so well. It’s almost as if they were buried and fossilized while still alive! Yet all evolutionary scientists agree on one thing: this burial could not have taken place only a few thousand years ago. Currently, secular scientists also confidently date the fossils in the Santana Formation at 113 million years (but those numbers change all the time). How can they be so sure?

It’s certainly not because of the physical evidence we have in front of us: the finely preserved specimens of past life and the surrounding rocks. Those don’t come with dates on them. No, these claims are built on layers of assumptions developed by fallible people; and the underlying assumption—even before they look at the evidence—is that all life evolved from a common ancestor over millions of years. As a creation scientist, my starting point is the Bible. I believe the fossils found in the Santana Formation are the result of Noah’s flood recorded in Genesis chapters 6–9, and the evidence fits nicely with that assumption.

The Bible tells us that the fountains of the great deep broke up, the windows of heaven were opened, and the rain was heavy upon the earth 40 days and 40 nights (Genesis 7:11–12). It happened very rapidly. Some of the animals were carried by the water and imbedded in the sediments while others were suddenly buried alive. Some of them were crawling, flying, and swimming, and others were eating a meal or even giving birth. We know that because their activities were recorded in the rocks. 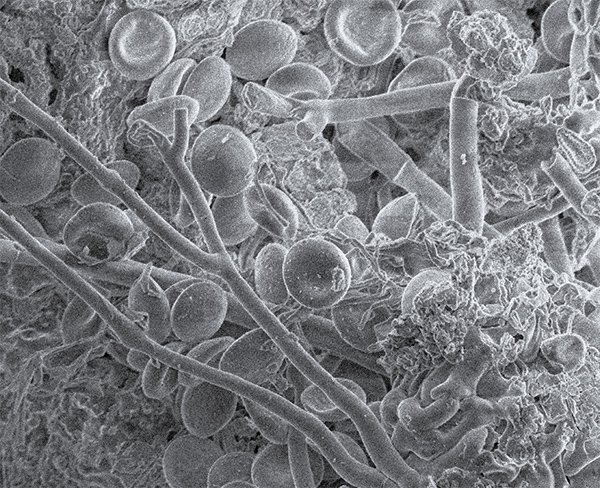 Blood cells have survived in the stomach of wasp fossils, supposedly for millions of years.

It is interesting that the evidence keeps pointing to a rapid event that buried everything we see in the fossil record, but the secular scientists, even knowing that rapid burial is a reasonable, important, and necessary factor for fossil preservation, keep their model that each layer was deposited over millions of years. Most believe that there was not one global catastrophe but that layers upon layers of sediments were deposited slowly, gradually covering the organisms.

The paleontologists are always amazed and surprised by the fine details they find in the fossils from the Santana Formation and so many other mass graves around the world. Scientists worldwide are studying how those details could get preserved. They don’t have a good explanation as to how the fossils could survive millions of years and still show so many details. Unfortunately, they won’t even consider the biblical account because they are committed to a different worldview that won’t allow it as an option.

We as Christians know the answer for this sudden burial. The Bible explains it very well. Whenever I heard comments about the puzzle of such fine preservation, I often said to myself, “It is because those fossils didn’t take millions of years to be formed, but they formed catastrophically.” Sadly, simply because I was a Christian who believed in creation, I couldn’t openly speak about my perspective. But now that I have finished my doctorate program, I can and will. Those fine details presented in the fossils are amazing evidence of the Genesis flood, and it is a privilege for me to study them to piece together these organisms’ amazing lives, death, and preservation! 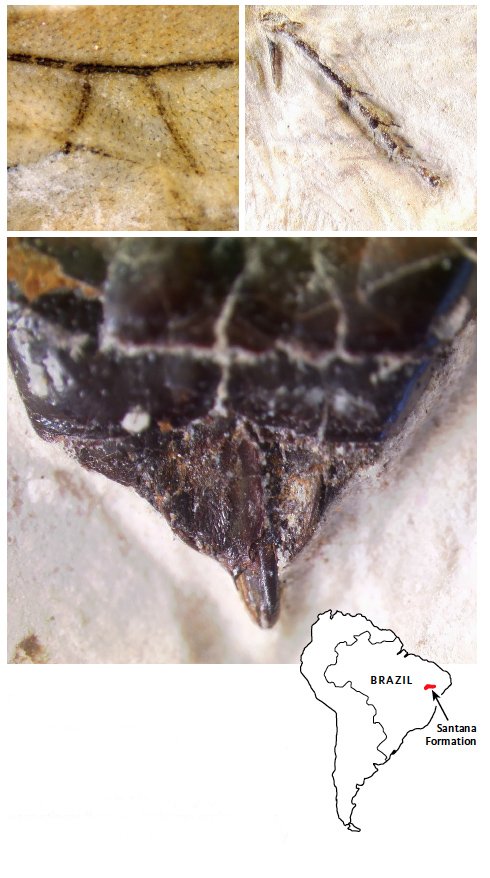 While researching insect fossils throughout the Cretaceous layers at Brazil’s Santana Formation, Dr. Gabriela Haynes regularly found exquisitely preserved details, such as filament in a wing (top left), the spur in a leg (top right), and a wasp stinger (bottom). Only one explanation is reasonable—these insects were buried suddenly and recently under unique conditions.

Dr. Gabriela Haynes earned her PhD in geology with a focus on paleontology. As a Brazilian, she worked in the Santana Formation and identified new species of fossil insects. A former volunteer at the museum, Dr. Haynes joined AiG in 2019 as a full-time paid staff scientist.
Previous Article A New Branch on the Tree of Life Next Article The Truth, the Partial Truth, and Anything but the Truth