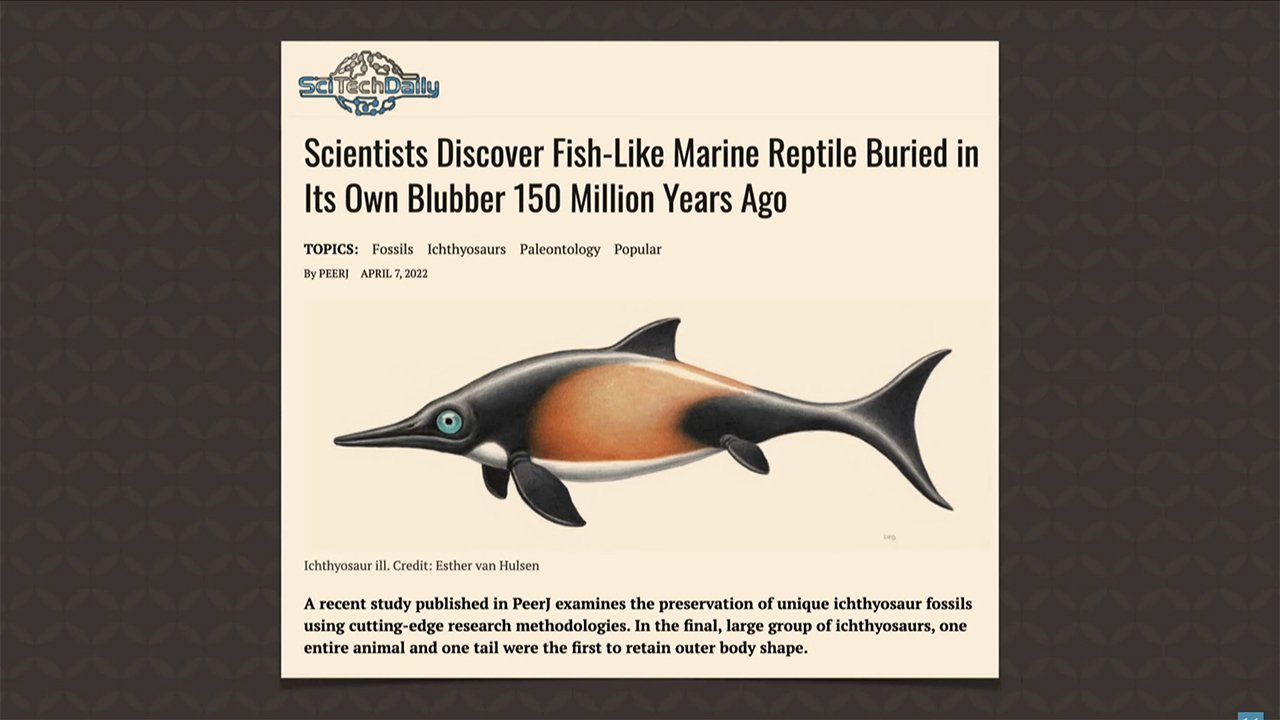 A nearly complete ichthyosaur skeleton that was discovered in 2009 was also covered in a news article recently. It (and another partial fossil discovered in 1926) were described in the April 7 edition of the journal PeerJ. Both fossils were found in the Solnhofen limestone of southern Germany in early Tithonian (Late Jurassic) sedimentary layers. What grabbed my attention was the mention of soft tissue and blubber in a supposedly 150-million-year-old fossil.

Now unlike soft tissue finds in T. rex and hadrosaurs, where the tissue was soft and viable, this “soft tissue” has been replaced by the mineral apatite (the same material our teeth are made of). This means that, although the outline of the creature and some skeletal remains have been exceptionally preserved, the creature underwent some decomposition as well as deformation after it died and was buried. The researchers utilized UV light to examine the fossil remains and discovered that there were two types of fossilized soft tissue. The first type, found along the margins of the body, was interpreted as smooth epidermis and dermis, possibly including connective tissue in the tail. The other type, which surrounds and covers the specimen, is interpreted as decomposed blubber. Decomposition converted phosphates in the blubber to the mineral apatite. 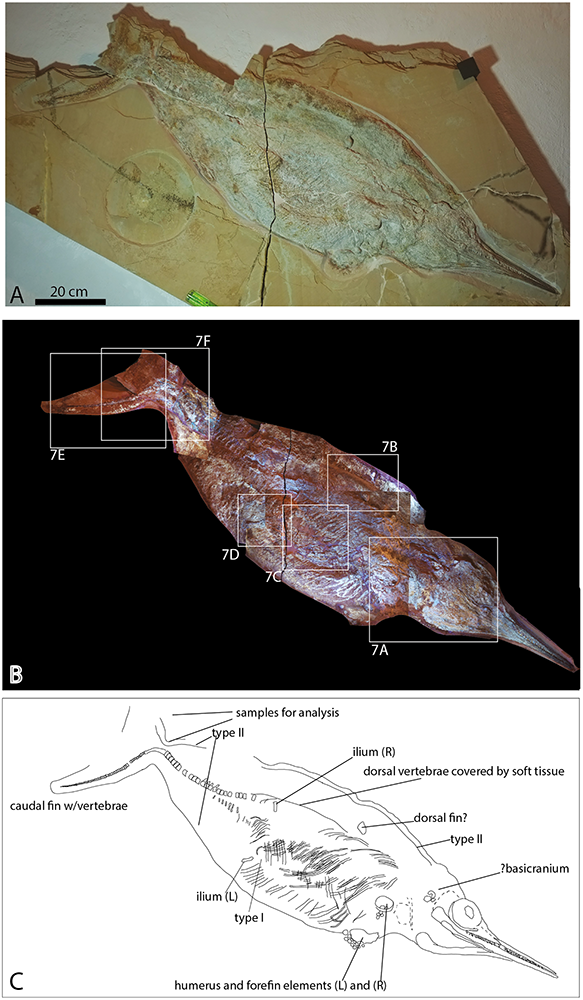 Much of the skeleton of the nearly complete ichthyosaur (measured at approximately 5.2 ft. or 161 cm) also showed signs of post-mortem compression. The load of sediment which covered it and perhaps killed it also “squashed” it, especially the head and abdomen. Furthermore, the researchers noted that the skin impressions preserved in the rock slab showed no signs of scales, meaning that at least this genus of ichthyosaur, described as Aegirosaurus, was smooth skinned, similar to a modern dolphin. In fact I couldn’t help thinking that this fossil resembled some of the long-nosed river dolphins (like from the Amazon, Indus, and Ganges) alive today, even though they are unrelated animals.

So how did the science writers describe such a fossil that is exceptionally preserved but also partially decomposed and compressed? Well the author of the news article sums it up this way: “During or after death, the ichthyosaur landed on its back and side on the seafloor, and was covered in fine sediments. Little oxygen and quite a lot of luck preserved it until it was found and excavated in 2009.” But the research paper authors describe the fossils’ preservation in the Solnhofen, as “fully articulated skeletons with mineralized soft tissue preservation are hypothesized to have been buried within a few weeks, such as due to sediments transported into the basin during storm events . . . with hypersaline, oxygen-poor to anoxic bottom waters, these conditions make the exceptional preservation possible.” Though their description differs in conditions and timeframe from the popular news story, they both have problems.

This was no mere “storm event,” but we claim this occurred during the flood of Noah’s time.

Now creatures with blubber don’t readily sink unless the sediment load is very heavy and blankets them completely. This was no mere “storm event,” but we claim this occurred during the flood of Noah’s time. These two ichthyosaurs were caught in a massive sediment load likely generated by submarine mudslides or tons of sediment washed off the continents. They were rapidly buried (not after weeks, or else there would have been scavenge marks on the body or tail fossil), which compressed portions of the body (of the intact specimen). This compression (and associated heat) caused the blubber to decompose, and the phosphates mineralized the soft tissue, thus preserving it as fossilized.

So a flood geology view is much more able to explain this find from a death, burial, and preservation aspect. It also washes away the millions-of-years interpretation of this fossil.

This item was discussed today on Answers News with cohosts Dr. Gabriela Haynes, Roger Patterson, and Bodie Hodge. Answers News is our twice-weekly news program filmed live before a studio audience and broadcast on my Facebook page and the Answers in Genesis Facebook page. We also covered the following topics:

Watch the entire episode of Answers News for April 25, 2022.