A Puzzle of Mud & Bones

Putting together the pieces of this puzzle points to the cataclysmic events of the global flood.

I’ve always enjoyed putting together jigsaw puzzles. But as a boy, I quickly got bored with working the puzzles picture-side up, so I’d turn the pieces over and connect them face down.

My desire for a challenge has served me well as a scientist. Solving scientific puzzles can be a bit like putting together a jigsaw puzzle picture-side down—but even more difficult. At least a jigsaw puzzle has all the pieces you need in one handy box. In scientific investigations, we must collect the pieces for ourselves.

The Bible gives us a broad historical framework in the events of creation, the fall, the flood, Babel, and so on. We can think of these as the edge pieces of the puzzle that set the boundaries within which the inside pieces can be placed.

But the Bible doesn’t tell us exactly how these inside pieces fit together. Consider fossils, for example. We know that the fall of Adam introduced death to humans and animals (Genesis 1:29–30, 3:19, 9:3; Romans 5:12, 8:19–23; 1 Corinthians 15:21–22). From this we can infer that fossils must date from a time after the fall. But details such as which fossils formed before, during, and after the worldwide flood are not revealed in Scripture. We have no picture on a box to help us fit together those pieces. We just have to piece them together based on the scientific clues we gather.

Since 1996, creation geologist Dr. Arthur Chadwick and his colleagues have been working on a scientific jigsaw puzzle in northeast Wyoming. For almost 25 years, they’ve gathered pieces of the puzzle and tried to work out how they fit together. But this is a jigsaw puzzle like no other. It’s a puzzle of mud and dinosaur bones.

Paleontologists are finding some of the puzzle pieces on an active cattle ranch about 25 miles (40 km) southwest of Newcastle, Wyoming.1 After early excavations at this remote site uncovered many fossil specimens, paleontologists discovered that a major bed of dinosaur bones extends for more than one square kilometer.2 Since then an average of 1,000 fossils has been collected from the site every year, each building a clearer picture of the past.3

To study the bone bed, paleontologists use high-precision GPS technology to record the position and arrangement of each bone.4 They then use digital photographs to capture the bones when they are excavated. On computers, they combine the GPS coordinates with the photographs to reconstruct the bone bed as it would have appeared in the ground.5 These methods allow the scientists to capture the 3D relationships between the bones, information that would have been lost by more traditional methods of excavation.6 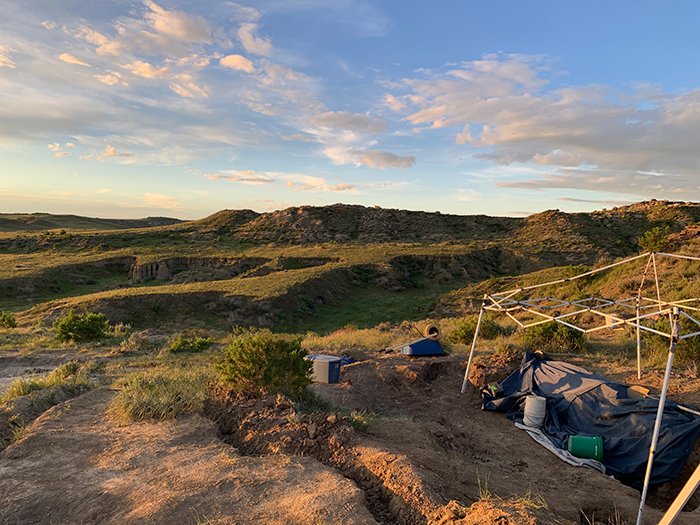 In Lance Formation dig sites like this one, research teams have discovered roughly 25,000 dinosaur bones and teeth.

Key Pieces of the Puzzle

In any jigsaw puzzle, several key pieces build up the picture, allowing more difficult pieces to be slotted in around them. Similarly, some key puzzle pieces have helped Dr. Chadwick and his team work out how the bone bed was formed. 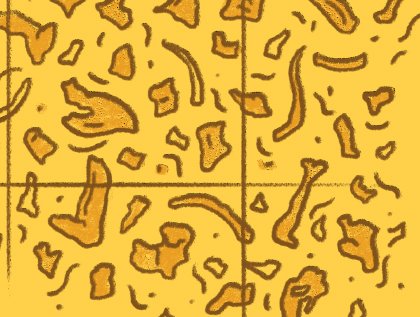 A Huge Concentration of Bones

As of 2019, about 25,000 bones, bone fragments, and teeth have been excavated from seven quarries dug into the main bone bed7—but this is only a fraction of what remains in the ground. Each square meter (11 square feet) commonly holds 20–30 bones.8

Most of the bones come from one type of dinosaur, a big plant-eater called Edmontosaurus.9 Paleontologists estimate that 25,000 of the dinosaurs are buried here, probably representing more than one herd.10 This is an immense find, especially considering that an adult Edmontosaurus was over 6,000 pounds (about 2,720 kg or 2.72 metric tons) and over 9 feet (3 meters) tall at the hips. (An average American bison, by comparison, weighed less than one-third as much as an Edmontosaurus.) 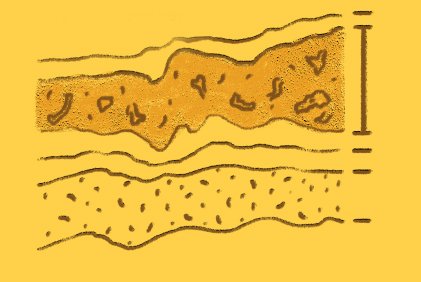 A Single Layer of Mudstone

The dinosaur bones are embedded in a single mudstone layer about 3 feet (1 m) thick.11 The mudstone is thickest in the northwest and gets thinner to the south.12 Above the bone bed is a layer of sandstone with features (such as climbing ripples, ripped-up mud pieces, and bone fragments) suggesting that it was deposited quickly.13 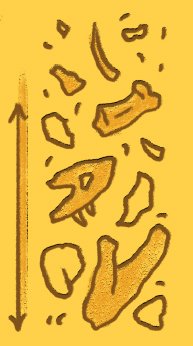 Occasionally two or three bones are found joined together, suggesting they were connected by soft tissues at the time of burial.15 However, most of the bones are disconnected, and no entire skeletons have been found.16 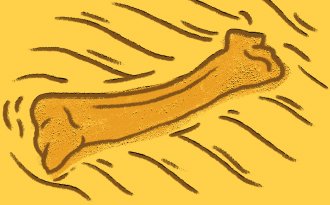 The bones show little evidence of exposure (such as weathering or sun bleaching) before burial and exhibit few signs of damage caused by being transported to where they were buried.17 However, some of the bones bear tooth marks, and others have been broken, perhaps by being trampled.18 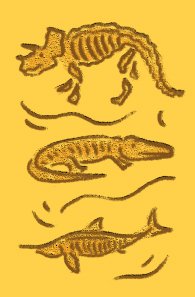 A Mix of Fossils from Different Environments

Though most of the fossils represent land animals (such as dinosaurs),19 some represent animals that lived in fresh or brackish water (such as crocodiles, turtles, and fish).20

Putting the Pieces Together

So how did this bone bed form? Many geologists who are not young-earth creationists believe that dinosaur bone beds built up over long periods as migrating herds tried to cross major rivers.21 Each season, when some of the dinosaurs drowned, their carcasses were swept downstream to accumulate on a sandbar or a bend in the river.

Over time, as the river slowly switched positions, an extensive layer of dinosaur bones accumulated. Of course, this would have been a very slow process, requiring at least thousands of years.

Based on the puzzle pieces collected at the dig site, researchers in Wyoming suggest that, at least in this case, something is very wrong with that popular picture.

For starters, the bones are in one layer and sorted by size from the bottom upward, indicating that they were laid down at one time—not in multiple events over a long time.22 Also, the mudstone in which the bones are found represents a type of sediment not typically associated with fast-flowing rivers.23 And if the carcasses had accumulated one by one on a sandbar, we would expect to find complete or partial skeletons, not multitudes of disconnected bones.

Dr. Chadwick and his colleagues have proposed a different scenario, one that better fits the data.24 They suggest that tens of thousands of Edmontosaurus perished in some kind of catastrophe,25 after which their carcasses lay around just long enough to rot and be scavenged. This explains why most of the bones have fallen apart and show signs of damage.

Next, this putrid mass of dinosaur remains was picked up by a swift mudflow26 and swept southward into deep water where the bones came to rest suspended in the mud. This explains the type of sediment, the sorting of the bones by size, and the mixture of fossils found with the dinosaur bones.

Only Part of the Puzzle

But what could have caused these catastrophic events? For scientists like Dr. Chadwick who accept the Bible’s account of earth history in Genesis 1–11, Noah’s flood springs readily to mind. Catastrophic volcanic eruptions and earth movements early in the flood most likely killed these dinosaurs. Then their carcasses rotted for a while on an area of land temporarily exposed above water before the bones were transported to their final resting place.

Although ultimately it’s impossible to prove, the picture emerging at the dig site in Wyoming provides us with fascinating insights into the cataclysmic events that took place during the flood, confirming the authority of God’s Word.

Even after almost 25 years, the jigsaw puzzle in Wyoming is still far from complete. That’s what makes science so challenging and fun—we know there are always more puzzle pieces to be discovered if we’re willing to hunt for them.

Flood Evidences in the Lance Formation

The dig site in Wyoming is only one piece of a much bigger geologic picture.

The bone bed belongs to the Lance Formation, a widespread rock unit that can be traced across much of Wyoming. (And to widen the picture even farther, similar formations spread across Montana, the Dakotas,27 Colorado,28 Saskatchewan,29 and Alberta.30)

The Lance Formation consists mostly of mudstone, sandstone, and some thin coal layers.31 Conventional geologists think that these sediments were deposited by freshwater streams meandering across a broad coastal plain about 66 million years ago.32 If this were true, it would have taken a long time to deposit the Lance Formation because it is almost a half mile thick.33

Based on many evidences, biblical creationists suggest that the Lance Formation was rapidly deposited during Noah’s flood.

The bone bed that Dr. Chadwick’s team has been excavating has been the most studied. But the Lance Formation features other bone beds deposited by mudflows and other types of catastrophic processes.34

Some sandstone layers in the Lance Formation extend for tens of square miles and must have been deposited by water flowing quickly over broad areas, not confined to narrow streams.35

Throughout the formation, sandstone layers show signs of earthquake activity.36 In fact, the thickness of some of the disturbed layers indicates that the earthquakes must have been hundreds to thousands of times more powerful than any modern earthquakes. The seismic shocks would likely have shaken the whole continent.

Most of the fossils in the Lance Formation were transported by water before they were buried.37 Extensive beds of fossil clams, tightly packed with the shells closed and hinges intact, testify to rapid burial since the hinges usually come apart within days after death.38

Most Lance Formation sediments show few signs of being churned up by animal burrows, suggesting they were deposited too quickly for burrowing animals to get to work.39

Lance Formation sandstones are rich in rock fragments, many of them volcanic.40 These rocks likely came from major eruptions in southwest Montana.41

The top of the Lance Formation is marked by a clay layer containing shocked quartz grains and high levels of iridium (a dense, hard metal),42 probably from a catastrophic asteroid impact.

Paul Garner, researcher and lecturer with Biblical Creation Trust in the UK, has an MSc in geoscience from University College London, where he specialized in paleobiology. He is a Fellow of the Geological Society of London and a member of several other scientific societies. He is the author of The New Creationism: Building Scientific Theories on a Biblical Foundation.