Ask the average layperson how he or she knows that the earth is millions or billions of years old, and that person will probably mention the dinosaurs, which nearly everybody “knows” died off 65 million years ago. A recent discovery by Dr. Mary Schweitzer, however, has given reason for all but committed evolutionists to question this assumption.

If dinosaurs lived over 65 million years ago, why do some dinosaur fossils still contain well-preserved soft tissues?

Bone slices from the fossilized thigh bone (femur) of a Tyrannosaurus rex found in the Hell Creek formation of Montana were studied under the microscope by Schweitzer. To her amazement, the bone showed what appeared to be blood vessels of the type seen in bone and marrow, and these contained what appeared to be red blood cells with nuclei, typical of reptiles and birds (but not mammals). The vessels even appeared to be lined with specialized endothelial cells found in all blood vessels.

Amazingly, the bone marrow contained what appeared to be flexible tissue. Initially, some skeptical scientists suggested that bacterial biofilms (dead bacteria aggregated in a slime) formed what only appear to be blood vessels and bone cells. Recently Schweitzer and coworkers found biochemical evidence for intact fragments of the protein collagen, which is the building block of connective tissue. This is important because collagen is a highly distinctive protein not made by bacteria. (See Schweitzer’s review article in Scientific American [December 2010, pp. 62–69] titled “Blood from Stone.”)

Some evolutionists have strongly criticized Schweitzer’s conclusions because they are understandably reluctant to concede the existence of blood vessels, cells with nuclei, tissue elasticity, and intact protein fragments in a dinosaur bone dated at 68 million years old. Other evolutionists, who find Schweitzer’s evidence too compelling to ignore, simply conclude that there is some previously unrecognized form of fossilization that preserves cells and protein fragments over tens of millions of years.1 Needless to say, no evolutionist has publically considered the possibility that dinosaur fossils are not millions of years old. 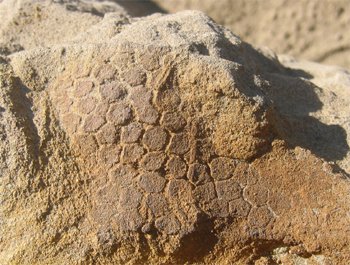 A Little Skin: A largely intact dinosaur mummy, named Dakota, was found in the Hell Creek Formation of the Western U.S. in 2007. Some soft tissue from the long-necked hadrosaur was quickly preserved as fossil, such as the scales from its forearm shown here.

An obvious question arises from Schweitzer’s work: is it even remotely plausible that blood vessels, cells, and protein fragments can exist largely intact over 68 million years? While many consider such long-term preservation of tissue and cells to be very unlikely, the problem is that no human or animal remains are known with certainty to be 68 million years old. But if creationists are right, dinosaurs died off only 3,000–4,000 years ago. So would we expect the preservation of vessels, cells, and complex molecules of the type that Schweitzer reports for biological tissues historically known to be 3,000–4,000 years old?

The answer is yes. Many studies of Egyptian mummies and other humans of this old age (confirmed by historical evidence) show all the sorts of detail Schweitzer reported in her T. rex. In addition to Egyptian mummies, the Tyrolean iceman, found in the Alps in 1991 and believed to be about 5,000 years old, shows such incredible preservation of DNA and other microscopic detail.

We conclude that the preservation of vessels, cells, and complex molecules in dinosaurs is entirely consistent with a young-earth creationist perspective but is highly implausible with the evolutionist’s perspective about dinosaurs that died off millions of years ago.

Dr. David Menton holds a PhD in cell biology from Brown University and is a well-respected author and teacher. He is Professor Emeritus at the Washington University School of Medicine in St. Louis. Dr. Menton has many published works and is one of the most popular speakers for Answers in Genesis.
Previous Article #2 Bent Rock Layers Next Article Faint Sun Paradox