Dinosaur National Monument houses one of the largest on-location dinosaur fossil displays in the entire world.

In its 210,000 acre (850 km2) park, Dinosaur National Monument houses one of the largest on-location dinosaur fossil displays in the entire world. The over 1,500 large fossil bones hint of a time long ago. However, the time may not be as long ago as many believe—depending on the worldview one has accepted. 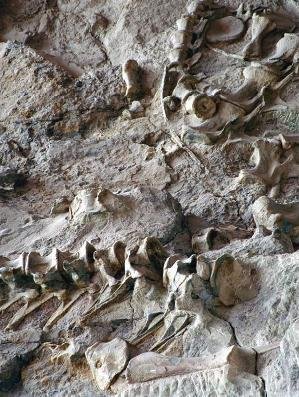 Dinosaur National Monument lies completely within what geologists call the Morrison Formation. The Morrison Formation spans over 700,000 square miles (2 million km2) from New Mexico into the provinces of Canada. This formation includes layers of a silica-rich volcanic ash that once covered the whole area. The remains of dinosaurs, clams, and snails are found jumbled within a pebbly sandstone layer.

In 1909, paleontologist Earl Douglass discovered eight articulated dinosaur tail vertebrae in the sandstone cliffs of eastern Utah. As he began digging he found, to his astonishment, dinosaur fossil after dinosaur fossil, buried one on top of the other.

After this great discovery, efforts began to preserve the dinosaur burial ground. This resulted in the building of the Dinosaur Quarry Visitor Center around the rock wall that contained the fossils. The Visitor Center invites every guest to view this dinosaur fossil collection and tries to explain, from a “millions of years” perspective, how dinosaurs evolved and how this massive jumble of dinosaur fossils came to be. One of the most complete dinosaur skeletons ever unearthed was found here in this mass burial. This skeleton was originally named Brontosaurus. A number of years later, this skeleton was revealed to actually be a combination of bones from two distinctly different dinosaurs. The major part of the skeleton was then renamed Apatosaurus, though currently it has been reunited with its proper head and classified back as a Brontosaurus.

According to some, 150 million years ago a river flowed through this area where many dinosaurs lived. As the dinosaurs died, their carcasses and bones were gradually and progressively picked up by the flooded waters of the river and were carried and deposited into the main channel, where they were buried one on top of the other. Over the millions of years that followed, the deposited sand and mud hardened and became solid rock. Through time, the earth’s crust was reshaped and rock layers were bent, the face of the cliff becoming exposed by slow erosion. Long exposure to the elements of rain, snow, and wind caused the sedimentary rock to erode, slowly revealing the buried fossils. 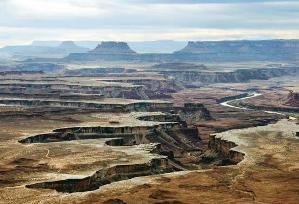 Scientists who accept a biblical perspective come to very different conclusions when considering the same evidence. They understand that a global worldwide Flood (as recorded in Genesis 6–9) would dramatically change the face of the earth and cause mass burials of large and small dinosaurs along with many species of sea creatures, forever entombing them in rapidly deposited sediment layers.

Created on Day 6 with the other land creatures and man, dinosaurs walked the earth until the catastrophic Flood destroyed all land-dwelling, air-breathing creatures not preserved on the Ark. Although representatives of each dinosaur kind were on the Ark and survived to repopulate the earth after the Flood, those that weren’t on the Ark perished in the Flood.

Many of these were washed together by the swirling Flood waters and buried in the rapidly forming sedimentary layers. When the earth-covering waters finally receded, the earth’s surface was greatly altered as mountains rose and valleys lowered. This explains why we find fossils of sea creatures and other former marine life in these high cliffs and in many other mountains around the world.

Found with the dinosaur fossils of Dinosaur National Monument is a group of clams, called unionid bivalves. The evidence shows that not only were they deposited in an unlikely place (among land animals), but they were buried very rapidly. When these clams die, their two shells normally come undone within days. However, in this unearthed mass burial, we see that many are still fully intact.

The clams and the dinosaurs were swept into the violent currents of the floodwaters, carried to their final destination and then buried in sediment, where they hardened in time, preserving the remains of these once-living creatures. The subsequent folding of these rock layers and their erosion was likewise very rapid towards the end of the Flood event.

Each visitor to Dinosaur National Monument sees the same evidence—massive amounts of dinosaur (and other) fossils all jumbled together. How one explains the formation of this fossil bed depends on one’s worldview. When viewed from a biblical perspective, the evidence is consistent with what one would expect from a worldwide Flood, and it confirms the truths of the Bible.