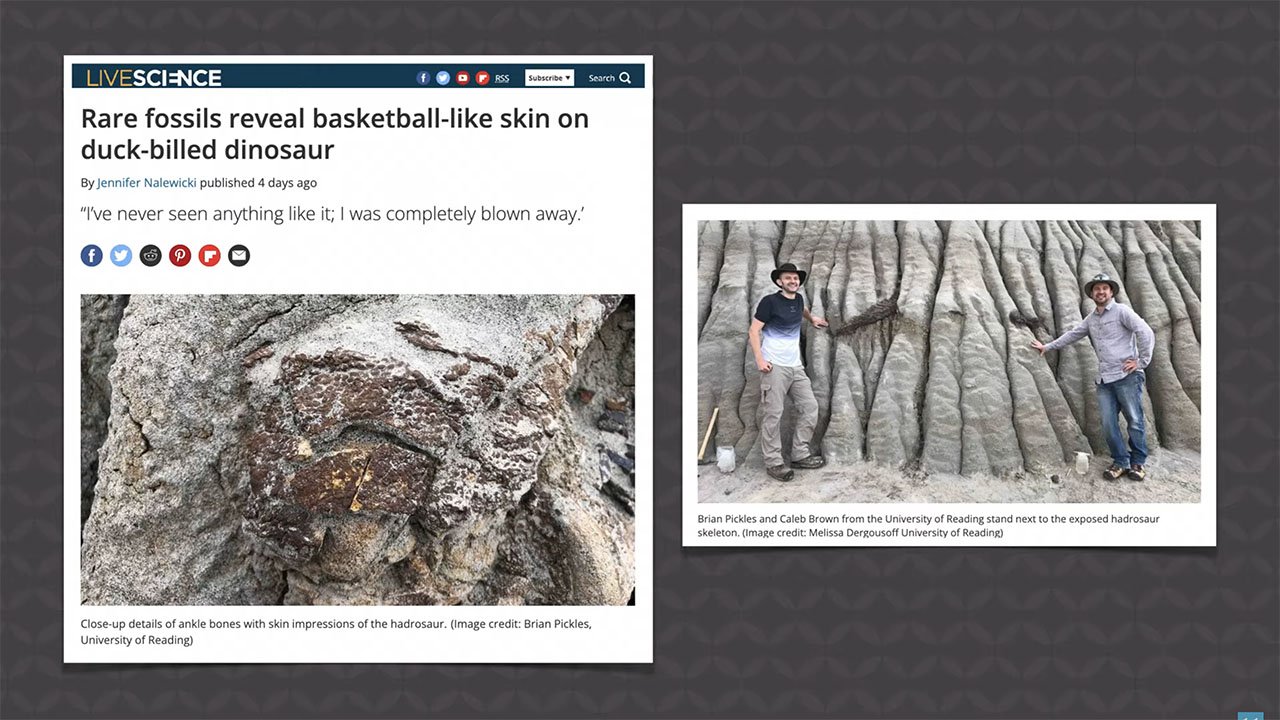 Drumheller, Alberta, Canada is considered the “dinosaur capital of the world” because of the number and variety of dinosaur fossils uncovered in this unique site. Well, this site is in the news again—and it’s not just due to the discovery of a near-complete skeleton of a hadrosaur (a “duck-billed dinosaur”), but because of the presence of fossilized soft tissue, including tendons and “dark, scaly skin” with a pebbly texture (like the surface of a basketball).

This incredible find shows the creature had to be buried very quickly, even before the skin could decay! The scientist who discovered the specimen says:

I think [the specimen] was covered quite quickly, otherwise it wouldn't be this well preserved . . . You can see some of its vertebrae and tendons, and once you get closer, you can see some of its scales. The dark, scaly skin has a basketball-like texture. This is something really special; you don't find things like this very often out in the field.

Rivers in the present are not constantly burying and fossilizing creatures! So how do they know that must have happened in the past?

Now, what could cover a 13-foot-long dinosaur that quickly (and that deep) for it to be preserved with soft tissue (like skin) still intact? Certainly not the “complex river system” they imagine buried this creature in silt and sandstone millions of years ago. After all, rivers in the present are not constantly burying and fossilizing creatures! So how do they know that must have happened in the past?

They don’t! That’s a worldview interpretation based on their starting point of evolution and millions of years of slow and gradual processes. But this find makes much more sense in a biblical worldview. We understand that this hadrosaur was rapidly and catastrophically buried during the global flood of Noah’s day. It wasn’t sitting around on a riverbank waiting to be buried! It was submerged in a deluge of muddy water and buried by silt and sand, quickly becoming a fossil. (And this wasn’t millions of years ago—it was just around 4,350 years ago.)

Science—including the study of dinosaurs—continues to confirm the history in God’s Word again and again.

I discussed this item today on Answers News with cohosts Dr. Kaia Kloster and Bryan Osborne. Answers News is our weekly news program filmed live before a studio audience and broadcast on my Facebook page and the Answers in Genesis Facebook page. We also covered the following topics:

Watch the entire episode of Answers News for September 12, 2022.