Image by Emily Waldman, via Plos One.

Fossil Footprints—Found Millions of Years Before the Creatures Who Made Them? 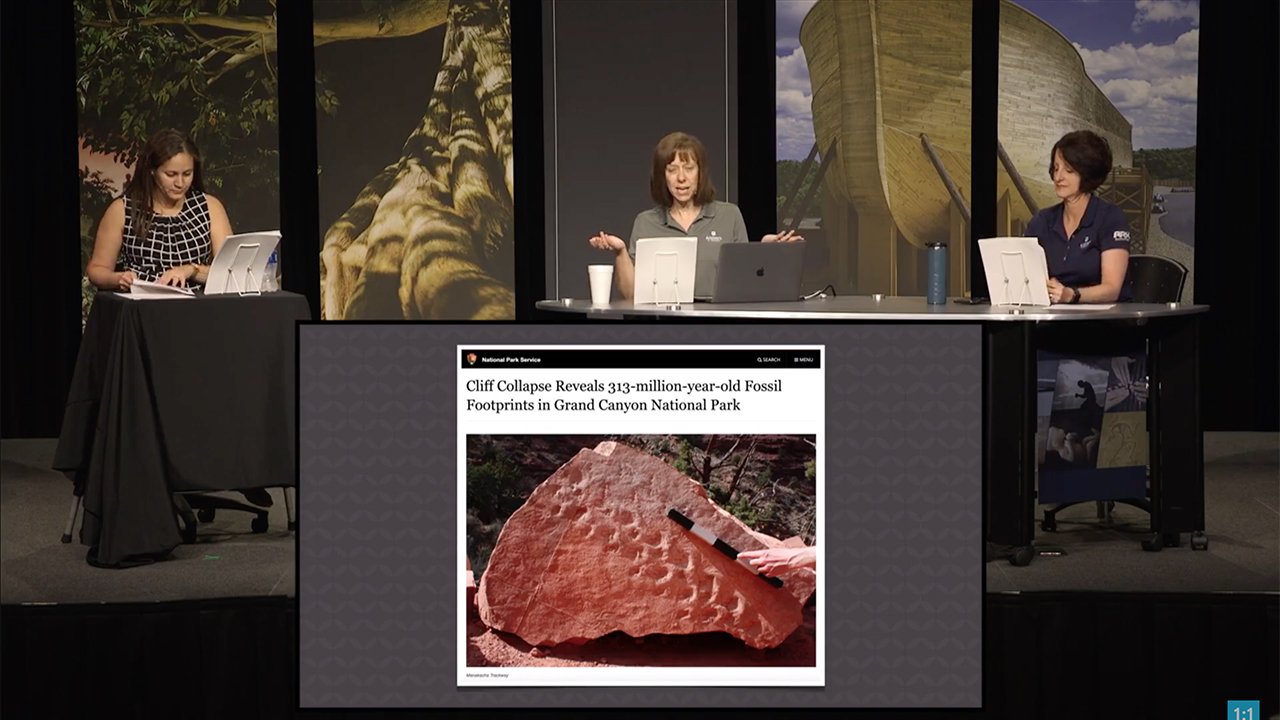 Every year, hordes of tourists descend on Grand Canyon to enjoy the natural beauty of this geological wonder. But many tourists hiking the popular Bright Angel Trail missed something very interesting—a series of fossilized footprints preserved in a boulder, lying next to the trail, that had broken off a cliff in the nearby Manakacha Formation. But in 2016, a geology professor hiking with his students noticed the footprints, and now research on these tracks has been released.

One of the scientists who studied these tracks, Stephen Rowland, shares:

These are by far the oldest vertebrate tracks in Grand Canyon, which is known for its abundant fossil tracks . . . More significantly . . . they are among the oldest tracks on Earth of shelled-egg-laying animals, such as reptiles, and the earliest evidence of vertebrate animals walking in sand dunes.

He believes these tracks are 313 million years old and represent two separate animals moving along the slope of a sand dune. These prints show movement identical to that of “living species of tetrapods” (cats and dogs are provided as examples of tetrapods), showing “the use of this gait very early in the history of vertebrate animals.” In others words, even after 313 million years of supposed evolution—tetrapods still walk the same way!

In places like the Grand Canyon, scientists routinely find fossilized trackways supposedly millions of years older than the fossils of the creatures that made them. It’s pretty convenient that creatures made footprints . . . then millions of years later the same creatures lived in the same region and just happened to be fossilized too! (Actually, such a notion strains credulity! It makes much more sense that these footprints and the creatures that made them were buried very soon after one another as the global floodwaters buried creatures as they fled).

Geologist Dr. Andrew Snelling, who heads up our Research Department here at Answers in Genesis, comments on finds such as this one:

I discuss this in my book Earth’s Catastrophic Past (chapter 52) and in one of my presentations (Fossils: Buried in the Flood, not Evolution over Millions of Years), and it was first presented in detail in a paper by Adventist Leonard Brand and a co-author J. Florence in 1982. The evolutionists have never answered this challenge in the 38 years since. The pattern is the same for reptiles, amphibians, dinosaurs, birds, and mammals.

It all only makes sense if the time between footprint-making and the animals perishing was hours or days at most during the global flood. Because of water-level fluctuations of hundreds of feet during the flood due to global tides and violent tsunamis, wet sediment surfaces would be temporarily exposed. Animals struggling to survive in the floodwaters would thus find temporary reprieve to leave their footprints on those wet sediment surfaces. The next water surge would carry them away while bringing in new sediments to bury and preserve their footprints. Then within hours or days those animals would perish in the floodwaters and become buried themselves in subsequently deposited sediment layers.

Like Dr. Snelling said, once again, the evidence confirms what we’d expect starting with God’s Word in Genesis and not the “just-so” evolutionary story.

This item was discussed today on Answers News with cohosts Dr. Georgia Purdom, Dr. Gabriela Haynes, and Dr. Jennifer Rivera. Answers News is our twice-weekly news program filmed live before a studio audience here at the Creation Museum and broadcast on my Facebook page and the Answers in Genesis Facebook page. We also covered the following intriguing topics:

Watch the entire episode of Answers News for August 31, 2020.