China’s famous Cretaceous wonderland in Liaoning Province—the Jehol Biota—is apparently sitting atop a gold mine of similarly well-preserved Middle-Upper Jurassic fossils. A team of paleontologists has just compiled a catalogue of the vertebrate fossils from six sites in this stratum and published the list in the Journal of Vertebrate Paleontology. They suggest the entire group, similar in age and ecology, be henceforth known as the Daohugou Biota. Daohugou is an Inner Mongolian village near the first of these fossil beds to be found. All six of the fossil-rich sites are in northeastern China’s Tiaojishan Formation.

“The Daohugou Biota gives us a look at a rarely glimpsed side of the Middle to Late Jurassic—not a parade of galumphing giants, but an assemblage of quirky little creatures like feathered dinosaurs, pterosaurs with ‘advanced’ heads on ‘primitive’ bodies, and the Mesozoic equivalent of a flying squirrel,” says lead author Corwin Sullivan. Coauthor Yuan Wang adds, “The Daohugou amphibians are crucially important in the study of the phylogeny and early radiation of modern amphibian groups.”

Paleontologists are confident that the Daohugou Biota is 30 million years older than the Jehol Biota. They base this on a combination of radiometric dates and the presence of a distinctive index fossil species of salamander in all six fossil beds. Published radiometric analyses of volcanic deposits in the region have assigned dates based on 40Ar/39Ar and U-Pb SHRIMP (uranium-lead sensitive high-resolution ion microprobe) measurements. (Read more about the unverifiable worldview-based assumptions on which such radiometric dates are interpreted in “Radiometric Dating: Problems with the Assumptions.”) 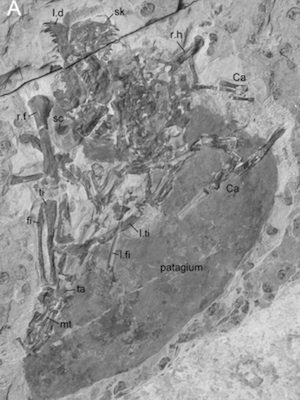 This Volaticotherium antiquum, discovered in 2006, is one of the well-preserved mammals of the Daohugou Biota. Like modern flying squirrels, it has a broad furry gliding membrane, known as a patagium. Image: C. Sullivan et al., “The vertebrates of the Jurassic Daohugou Biota of northeastern China,” Journal of Vertebrate Paleontology 34, no. 2:243–280, doi:10.1080/02724634.2013.787316. 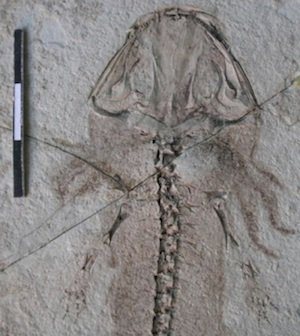 Chunerpeton tianyiensis is a salamander species found in all six fossil beds comprising the Daohugou Biota. Chunerpeton‘s distinctive characteristics not only continued unchanged in the Jehol Biota’s Regalerpeton salamander but remain the same today. Its external gills are well-preserved in this specimen. (Scale bar=3 cm) Image: Society of Vertebrate Paleontology through ScienceDaily

Despite an apparent jump of 30 million years between Daohugou and Jehol Biota, the ecosystem and animals seem virtually unchanged. Believing that birds diverged from dinosaur ancestors in this ecosystem, co-author David Hone says “you can barely tell them apart.”1 Mammals in the layer include a mammal equipped to glide like a modern flying squirrel. Well-preserved salamanders include the Chunerpeton, which is found in all six sites in the Daohugou system. Chunerpeton‘s distinctive characteristics not only continued unchanged in the Jehol Biota’s Regalerpeton salamander species but remain the same today, presumably 160 million years later. In fact, “Chunerpeton is one of the few Chinese Mesozoic caudates [vertebrates with tails] that can be referred to a traditionally recognized living family.”2 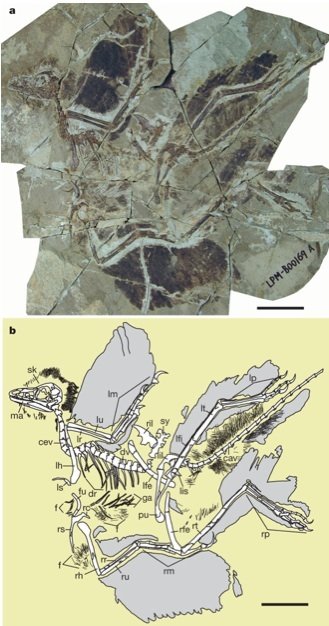 This fossilized Anchiornis huxleyi (designated LPM-B00169) described in 2009 is from one of the fossil beds in the newly named Daohugou Biota. Its picture is reprinted in the current study. Feathers (f) are indicated along the tail (cav), right tibiotarsus (rt), and right humerus (rh). Evolutionary paleontologists consider it to be an extremely bird-like dinosaur. Image: Dongyu Hu et al. “A pre-Archaeopteryx troodontid theropod from China with long feathers on the metatarsus,” Nature 461 (1 October 2009):640–643.

Liaoning Province’s Cretaceous Jehol Biota is famous for its ever-growing collection of supposed feathered dinosaurs. The same can be said of the four sorts of presumably plumed dinosaurs in the Jurassic Daohugou Biota. “The Cretaceous feathered dinosaurs of northeastern China have been astonishing palaeontologists and the public for almost two decades now,” says Sullivan, “and the Daohugou Biota preserves their Jurassic counterparts in the same region. As prequels go, it’s pretty exciting.”

The extremely bird-like “dinosaurs” of the Daohugou Biota include Pedopenna and Anchiornis. Anchiornis has bona fide pennaceous feathers. It even has feathers on its legs. Such “‘feathered trousers’ of some description were very much in fashion among Mesozoic paravians,”3 the authors write. Like Microraptor, Pedopenna daohugouensis also had feathered trousers.

Other specimens from Daohugou are less convincing. Xiaotingia, which has no definitive plumage, prompted Archaeopteryx to be re-classified by some as a non-bird, though that change has since been debated.  And Epidexipteryx is considered a “feathered dinosaur” because it supposedly has “elongated tail feathers” but no other feathers. The long straight structures in the photos published with this study, however, do not look like feathers. Answers in Genesis’s Dr. David Menton, an expert on feathers, comments, “I see no evidence of barbs in these structures.”

The presence of real feathers on a modern creature identifies it as a bird. Certainly there are many extinct creatures in the fossil record, and it is not surprisingly that they differ in some ways from the birds at our backyard feeders. But there is no justification in considering an obviously feathered animal to be anything but a bird, other than the wish to establish an evolutionary origin for birds and feathers.

Furthermore, not all evolutionists believe birds evolved from dinosaurs. For instance, Alan Feduccia—explaining away the “temporal paradox”4 that plagues those who have difficulty explaining how birds like Archaeopteryx, deep in Jurassic rock, could have evolved from Cretaceous dinosaurs higher up—has said that Microraptor was a highly evolved bird, but not a dinosaur.5 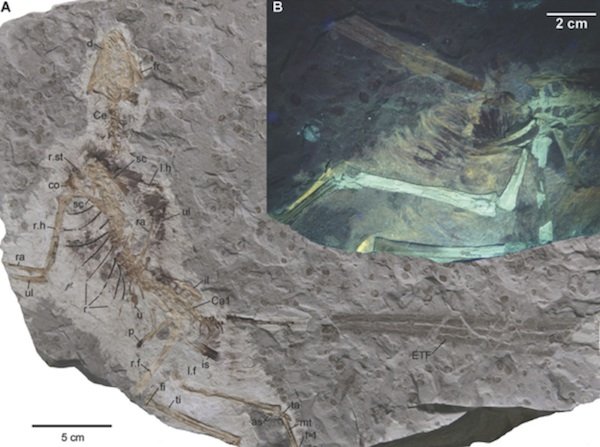 This fossilized Epidexipteryx hui, discovered in 2008, is among the Daohugou Biota. Paleontologists believe this dinosaur had elongated tail feathers (ETF) but no other feathers. These ETF, unlike feathers however, lack barbs. Image: C. Sullivan et al., “The vertebrates of the Jurassic Daohugou Biota of northeastern China,” Journal of Vertebrate Paleontology 34, no. 2:243–280, doi:10.1080/02724634.2013.787316.

Cladistics is used to determine how many characteristics different things have in common.

Fossils classified as feathered dinosaurs, whether from Jehol or Daohugou Biota, range from those with highly questionable excuses for feathers to fossils that are evidently birds classified as dinosaurs through the convenient biases of cladistical magic.

How can paleontologists tell whether a fossil is the remains of a bird or a dinosaur? They frequently rely on a classification method called “cladistics.” Cladistics is used to determine how many characteristics different things have in common. Evolutionists use cladistics to tally up “shared derived characters” in order to trace evolutionary relationships. These “derived characters” are anatomical features, even very subtle ones, that presumably evolved and got passed on to new creatures as they evolved. This system has largely replaced the traditional method of guessing at the evolutionary ancestry of creatures based on obvious similarities and differences.

Why the switch? After all, cladistical analysis of fossils requires a computerized database of minute details, each categorized according to what kind of animal paleontologists think it most resembles. By scoring the way many minute anatomical details are classified, cladistical analysis can result in a biased result in which small details—even those accurately assigned—outrank major similarities. This can produce interesting results, such as the decision to no longer consider Archaeopteryx a bird, and the subsequent decision to restore it to bird-hood. Depending on how the “shared derived characters” are defined, absurdities can result—absurdities such as re-defining feathered birds as dinosaurs.

Cladistics has become so popular among evolutionists because Linnaean taxonomy has failed to provide them with transitional forms they need to complete the evolutionary picture they wish to paint from the fossil record. (Of course, we maintain those transitional forms are “missing” because they never existed, since nothing in observable experimental biology shows that such evolutionary transitions into new, more complex kinds of creatures could ever happen.) Cladistics, by using computer algorithms to catalogue many “derived characters” that supposedly evolved and got passed on, tracks evolution through the fossil record, conveniently eliminating the need to locate transitional forms at divergence points. Evolutionists presume that similarity is generally evidence of shared ancestry, so cladistics has become a way to build a case to support evolutionary beliefs without the need to find missing links.

We create classification systems to organize nature for our convenience. Classification systems can be based on any number of things: where it lives, how it moves, its overall body plan, what its skin covering is like, how it breathes—even how it tastes! (Recently there has even been a proposal to classify organisms according to genomic similarities.) Cladistics scores how similar things are, but from it evolutionists infer how closely related different kinds of organisms are.

Thanks to cladistics, similarities representing common designs employed by a Common Designer in the anatomy of diverse organisims can be recruited to fabricate a case for molecules-to-man evolution, and for dinosaur-to-bird evolution. This evolutionary tale is accepted in the absence of any biological evidence to show that one kind of creature can evolve into a new, more complex kind of animal. Cladistics thus provides a way to classify animals in ways that are more amenable to fulfilling evolutionary preconceived beliefs.

God’s Word contains His own eyewitness account of the origin of all kinds of animals in Genesis chapter 1. He created all kinds of animals on the 5th and 6th days of Creation week about 6,000 years ago. They have continued to vary and reproduce only within their created kinds as we would expect on the basis of biblical history. Biblical history also tells of the global Flood. Rapid burial of animals in water borne sediment during the violence of the global Flood explains the excellent preservation seen in deeper fossil layers like the Burgess Shale as well as in the higher deposits containing the Daohugou and Jehol Biota. It is no surprise that these geologic layers show no substantial differences between the sorts of creatures buried there as they were all buried within weeks of each other around 4,300 years ago during the Flood. The Bible thus explains the similarities of the Jehol and Daohugou Biotas.

Previous Article Ancient Humans of Paracas Are Victims of a Twisted Tale Next Article Does Your Dog Understand You Because You Share an Ancestral Bond?