Two stashes of fossilized eggs in Late Cretaceous sandstone of the Spanish Pyrenees have paleontologists puzzling about the identity of the parents. Unlike some fossilized eggs found with embryos, juveniles, tracks, or adults, these orphan eggs stand alone. “The size and shape of these eggs . . . are roughly similar to modern hen eggs, which is unusual in the Cretaceous fossil egg record,” write the authors of a study published March 13 in Paleontology. The discoverers have dubbed the missing parents Sankofa pyrenaica, which means “learning from the past.”

Analysis of the eggs reveals some characteristics typical of bird eggs and others characteristic of dinosaur eggs. The authors write, “No direct evidence as to the identity of the producers of these eggs has been found.”1 They note that the eggs are similar to a fossilized bird egg from Argentina and have a teardrop shape similar to modern birds. Other features—such as a two-layered shell on microscopic examination—are characteristic of dinosaur shells. Therefore, even though they admit the similarity to the Argentinean bird egg “may suggest an avian identity,” the authors consider the “mosaic distribution of features . . . a combination between that of birds and nonavian theropods.”2 They write, “This enhances the arguments supporting the close phylogenetic relationships between both groups.”3

These eggs make more exciting news if they are dinosaurian than if they belonged to a bird, and they make even bigger headlines if they can appear to be transitional between dinosaurs and birds. However, the authors make a pretty strong case for a bird-identity when they note the similarity to the egg of a known extinct Argentinean bird. Furthermore, after lining up typical bird and typical dinosaur egg shapes, they note the new egg shape is so strikingly bird-like that “the similar positions of the two late Cretaceous eggs [on the shape chart] could suggest an avian identity for Sankofa in spite of its primitive eggshell microstructure.”4 And while the majority of fossilized birds are above the Cretaceous, bird fossils do appear in the that layer. 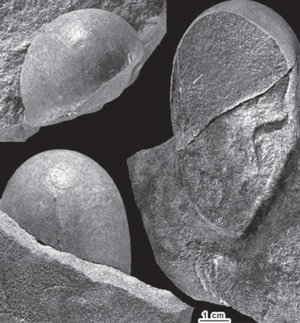 The sandstone in which these eggs were found is “cemented by calcium carbonate”5 and rich in marine fossils. The eggs must therefore have been buried catastrophically in ocean water. While the researchers propose the eggs were located on an island beach, we would point out that the global Flood, when the ocean waters rose to cover all the continents over 4,300 years ago, would have supplied the surging water-borne sand to rapidly bury the eggs with marine fossils, sand, and mineralized water acting like cement.

There is certainly nothing in the study to demonstrate a transitional creature or even a transitional egg between dinosaurs and birds. Birds and dinosaurs were created on the 5th and 6th days of Creation week and did not evolve one into the other. Whether these eggs were bird eggs or dinosaur eggs, they were buried in the global Flood.