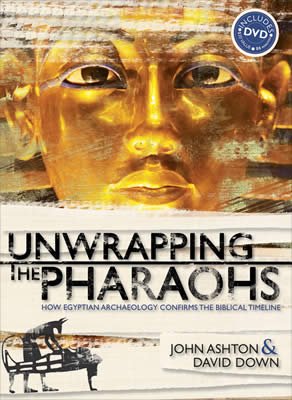 This beautiful book reveals the Egyptian pyramids, ancient tombs, tablets, and mummies. Authors John Ashton and David Down provide fascinating information about the architecture, timelines, and culture of Egypt during the times of Moses, Joseph, “King Tut,” and others. Delve into the secret rooms of the pharaohs and find an astonishing connection to the biblical chronology.

There is a widely taught historical view which proposes that we humans evolved from lesser life forms over millions of years, resulting in primitive human species about 100,000 years ago, with human skills developing about 10,000 to 20,000 years ago, culminating in the birth of the first civilizations about 5,500 years ago in Sumer and Egypt. The biblical view proposes that humans were created as fully developed, highly intelligent beings about 6,000 years ago, and that there was a destructive worldwide flood about 4,300 years ago with only Noah and his family surviving. The Bible names one of Noah’s grandsons as Mizraim, the father of the Egyptians. Thus, Egypt stands out as the oldest continuous civilization according to both worldviews. . . .

In this book, beginning with the oldest monuments (pyramids) which remain at the present time, we describe what they are like and explain some of the details that they tell us about life and events in the past. . . . The archaeological remains in Egypt tell us quite a lot about this ancient civilization, but we will notice when we examine the monuments and other remains closely that there is a scarcity of fixed dates and timelines for the events that occurred in each dynasty. On the other hand, the Bible provides a written history of events with an almost unbroken timeline from the Flood onward. The historical accuracy of the biblical record in the latter part of the Old Testament has been confirmed by much archaeological research.