The Pharaohs of the Bible

by David Down and Dr. John Ashton on January 28, 2010
Featured in Unwrapping the Pharaohs
Share:
Email Using:
Gmail Yahoo! Outlook Other

The Old Testament writings have been “sealed,” so to speak, over centuries by a Hebrew tradition for meticulous accuracy in preserving the Scriptures.

The reduced chronology proposed in the previous chapter fits Egyptian history into the post biblical Flood era. In this much shortened time frame, we have shown that there is a consistent and coherent alignment between certain details and clues from Egyptian inscriptions and reliefs and the Bible record that is lost when the widely accepted longer time scales are used. 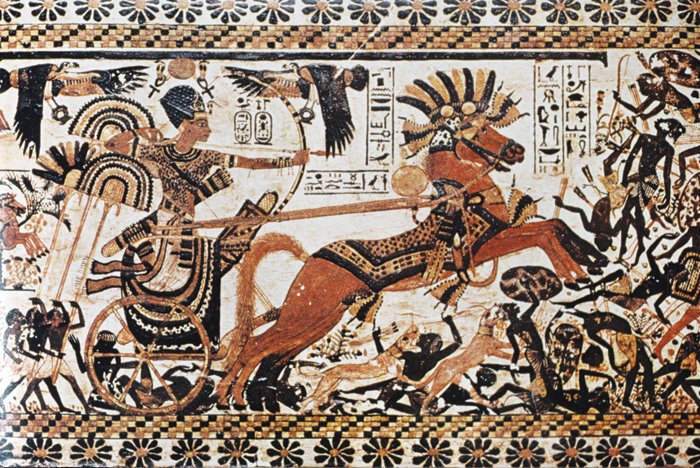 The biblical account of the Exodus describes the Egyptian army using chariots that became bogged while pursuing the Israelites into the Red Sea.

The Egyptian archaeological sources are completely separate from the Old Testament record that was maintained by the scribes, but both have had their content preserved, essentially unchanged over time. In the case of the pharaohs, the history contained in their monuments and relics has been preserved in stone or hidden away in secret chambers until their relatively recent discovery and interpretation. Similarly, the Old Testament writings have been “sealed,” so to speak, over centuries by a Hebrew tradition for meticulous accuracy in preserving the Scriptures. The Jewish scribes, whose duty was to copy the books, built in certain customs as mechanisms to protect the records these books contained from any corruption or amendment. In some instances, they counted every verse, every word, and even every letter in every book of the Old Testament. They also had practices such as recording the word that was in the exact middle of the book so that later copyists could count both ways and be sure they had not left out even a single letter.1

The points of agreement between these two independent sources are thus highly significant and serve, on one hand, to calibrate the chronology of Egypt and, on the other, to confirm the detail of the accuracy of the biblical account. Dates in Egyptian history can be assigned, and historical persons in the Bible, such as the Queen of Sheba, can be identified.

Especially during the Greek period, the wealthy dead were buried in ornate coffins on which was the face of the deceased.

From the about the seventh century B.C. onward, there are fewer problems with Egyptian chronology. Several pharaohs from this time period are mentioned specifically by name in the Old Testament. They are Hophra, Necho, and Taharka, and the chronology of the biblical account concurs with the conventional dating of each of these kings’ known history. The relative abundance of historical data for these later periods makes their timeline relatively unambiguous and serves to confirm the accuracy of the Bible.

The earlier Egyptian history lacks reliable external dating events, and, thus, the archaeological findings have been the topic of much subjective chronological interpretation and speculation. However, Old Testament chronology overlaps these earlier dynasties, and given the devotedness of the Jewish scribes to accuracy and detail, we have no reason to doubt that its accuracy would have been maintained during this period. In this way, the Bible can provide the external dating events needed to establish the chronology of the earlier Egyptian dynasties.

The resulting shortened chronology described in this book identifies Pharaoh Hatshepsut as the Queen of Sheba, while her sister Neferbity was probably the daughter of Pharaoh (Thutmosis I) whom King Solomon married. The great pharaoh Thutmosis III would have been the pharaoh named in the Bible as Shishak who looted Jerusalem. Pharaoh Amenhotep II was probably the king named in the Bible as Zerah, the Ethiopian who fought against King Solomon’s great grandson, King Asa. 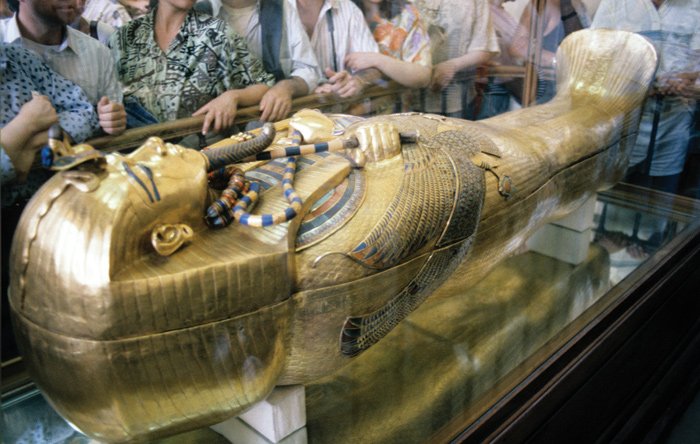 The third innermost coffin in which Tutankhamen was buried was made of solid gold and weighed some 242 pounds (110 kg). It testifies to the skill of the ancient Egyptians.

Pharaoh Sesostris I is identified as the pharaoh who appointed Joseph over Egypt, with Joseph himself possibly being identified as Mentuhotep, Sesostris’ vizier or prime minister. Sesostris III would have been the pharaoh who oppressed the Israelite slaves, and Sobekneferu, the daughter of Amenemhet III, was the princess who rescued Moses from the Nile. Neferhotep I was the pharaoh who refused to let the Israelites go and who subsequently drowned in the Red Sea with his army. The Amalekites were the mysterious Hyksos who invaded Egypt after the Egyptian army had been destroyed. Going further back in history, Khufu was probably the pharaoh that Abraham met when he visited Egypt.

Putting the Egyptian names to these persons described in the Bible adds an exciting new dimension to our understanding of the past. Having a correct chronology for Egyptian history provides a basis for identifying archaeological findings which further support the accuracy of the Old Testament. Following on from what we noted at the beginning of this book, if the independent witness of Egypt’s ancient past and the Old Testament agree, surely what the Bible says about the history of the world must be true.