The Dynasty of Rameses

by David Down and Dr. John Ashton on December 31, 2009
Featured in Unwrapping the Pharaohs
Share:
Email Using:
Gmail Yahoo! Outlook Other

Mernpetah only reigned for ten years, during which time he built his own mortuary temple, and left a stela in it recording his military activities.

Petrie found the stela in 1896, and after climbing down into a hole to read the underside of the stela, emerged to remark to his assistant that he would be remembered more for the discovery of this stela than anything else he had ever found. He had read the word Israel in the inscription, the only mention of this word ever found in ancient Egypt. 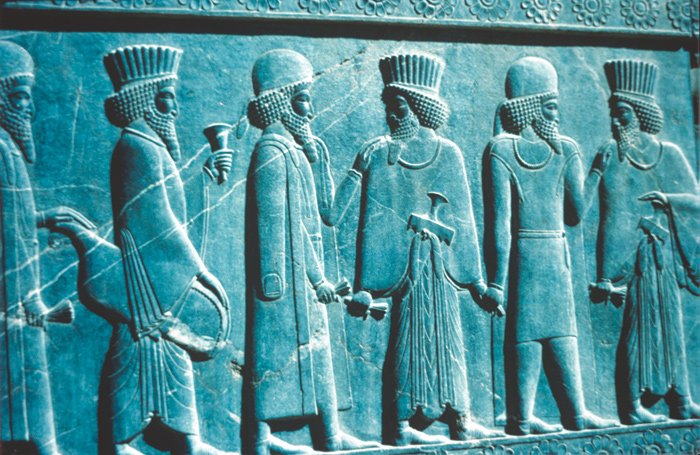 Reliefs on the walls of Persepolis depict Persians with headdress strikingly similar to the captives depicted on the wall of Rameses III at Medinet Habu. The “Peleset” as they were called should be identified with the Persians, not the Philistines.

Actually it was not Merneptah who made the 10.8 foot (3.3 m) high stela. It had first been written on by Amenhotep III, who told of what he had done for the temple of Amun. On the opposite side, Merneptah told how, in the fifth year of his reign, he had driven the Libyans out of Egypt.

There is the usual praise for Merneptah’s valor and then,

“Great joy has arisen in Egypt, and jubilation issues from the towns of Timuris. They tell of his victories which king Merneptah has won among the Tehenu. How they love him, the victorious prince. They magnify him among the gods. How fortunate he is, the lord of command. Ah, it is good to sit down and chatter. Men walk again unhindered on the roads, and there is no fear in men’s hearts. . . . There is no shouting and calling out in the night of ‘Halt, halt,’ in the speech of strangers.” 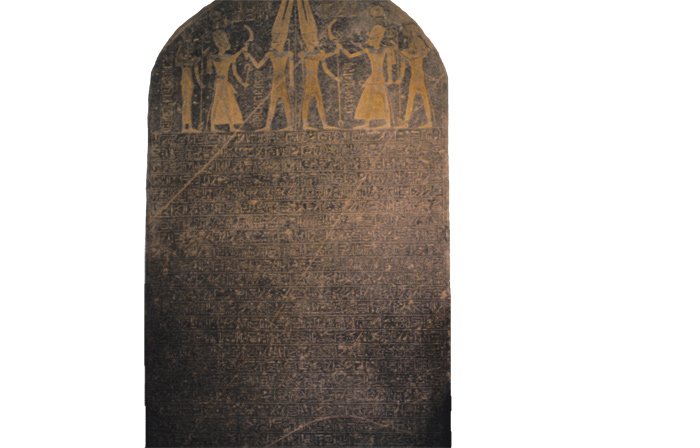 At the bottom of Merneptah’s stela, now in the Cairo Museum, is the word Israel. This is the only place this name is mentioned in ancient Egyptian inscriptions.

It is the text at the bottom of the stela that has aroused the most interest. It simply adds, “Desolation is for Tehenu, Hatti is pacified, plundered is the Canaan with every evil, Carried off is Ashkelon, seized upon is Gezer, Yanoam is made as that which does not exist, Israel is laid waste, his seed is not.”1

Much has been read into this passage to make it a record of a military invasion by Merneptah, but Merneptah does not claim that he invaded these nations or areas, and we may be sure that if he had he would have gotten more mileage out of it than a brief note at the bottom of his Libyan stela. This is nothing more than a postscript to his Libyan war where he summarizes the political state of the nations to the north of Egypt. 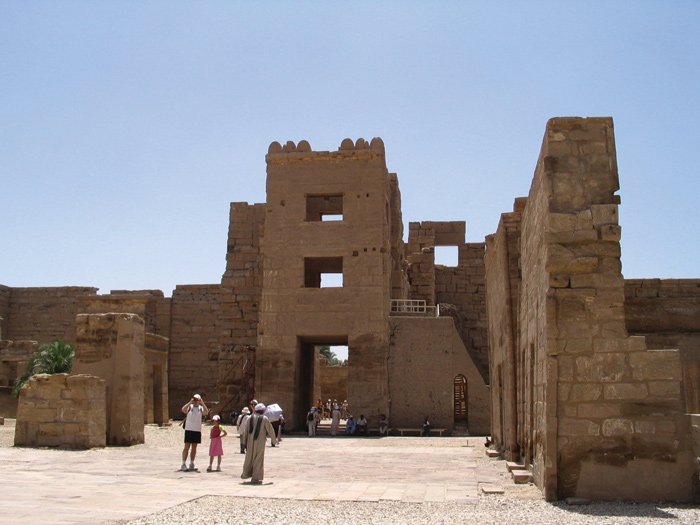 The Medinet Habu temple of Rameses III is on the west bank of the Nile at Luxor. It is remarkably well preserved and this may be partially due to it being built much later than usually thought.

In his revised chronology, Courville places Merneptah in the eighth century B.C.,2 and applies the conditions in Asia Minor to the consequences of the Assyrian conquests in which Sargon “the king of Assyria took Samaria and carried Israel away to Assyria” (2 Kings 17:6). This was in 722 B.C., and the result was that “Israel is laid waste, his seed is not.” 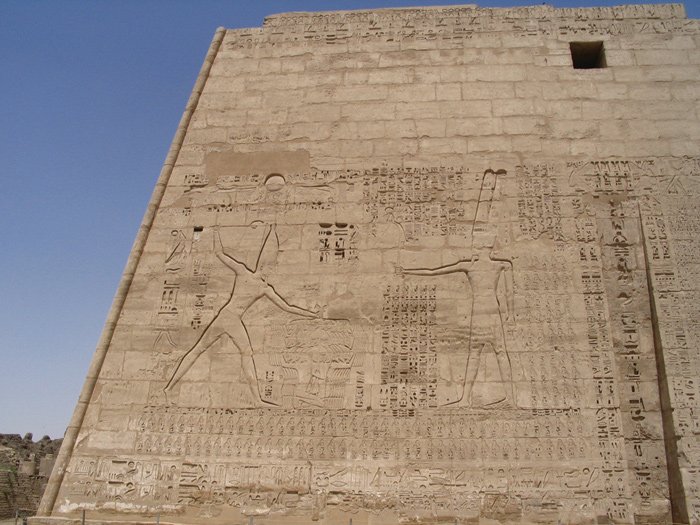 On the front wall of his temple of Medinet Habu, Rameses III is depicted smiting his enemies.

The Merneptah stela has caused some embarrassment to those who tried to equate Merneptah with the pharaoh of the Exodus. If Israel was in Palestine during the reign of Merneptah, he could hardly have been the king who was drowned in the waters of the Red Sea when Israel left Egypt.

Nothing much happened during the rest of the dynasty. It is maintained that Merneptah was followed by three insignificant kings and a queen, Tawosret. The Encyclopaedia Britannica tersely remarks, “Dynasty ends in confusion.” Tawosret had a sole reign of a few years and took the titles of a pharaoh. 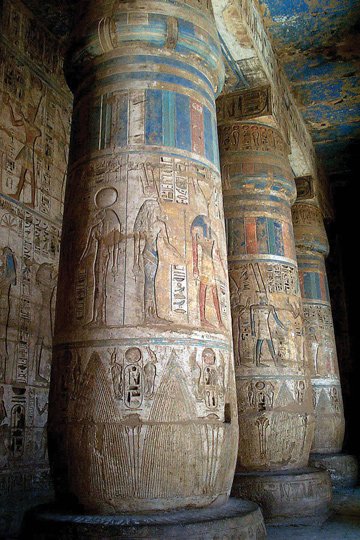 The traditional view is that Setnakht was the first king of the 20th Dynasty, and after a brief rule was followed by his son Rameses III, usually dated to the early 12th century, who is best known for the temple at Medinet Habu, which he built as a palace and a fortress. It has massive mud brick walls encircling it.

This temple is not only still in very good condition today, but there are also many inscriptions on its walls which have provided invaluable information on the history of Egypt. Unfortunately, these inscriptions have given rise to more arguments than agreements.

In the eighth year of the reign of Rameses III, there was an invasion of Egypt by the so-called “peoples of the sea.” They are depicted on the walls of Medinet Habu, and many are the “known facts” which have been derived from these pictures and inscriptions. 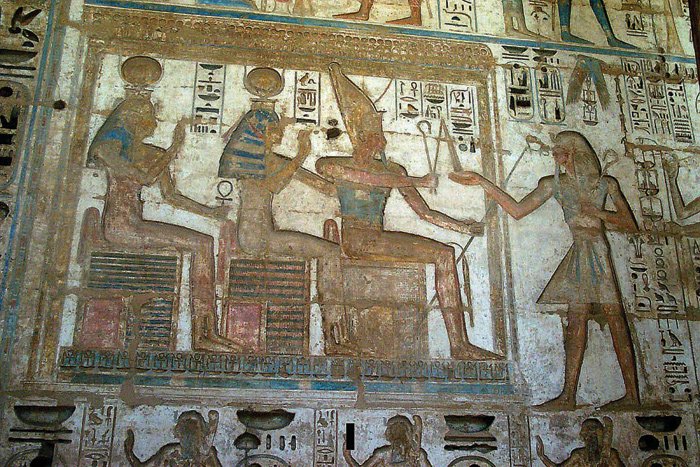 In traditional style, Rameses III is depicted on the walls of Medinet Habu worshiping his gods.

In 1978, Thames and Hudson published a book by N.K. Sanders called The Sea Peoples—Warriors of the Ancient Mediterranean, 1250-1150 B.C. It was revised in a later edition printed in 1985.3 It reviews the whole supposed story of these sea peoples who migrated from the islands and coasts of the northeast Mediterranean, swept over Anatolia, bringing to an end the empire of the Hittites, surging down into Syria and southern Palestine, and finally invading Egypt itself. One of these tribes is called the Peleset, who settled on the southern Mediterranean coast and became known as the Philistines. 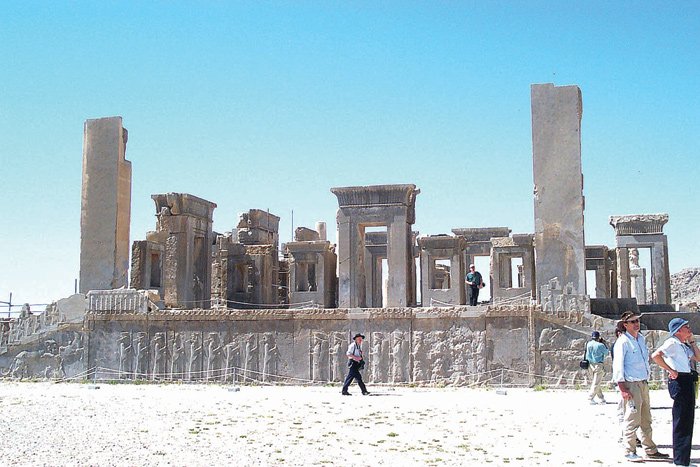 At Persepolis in Iran, Persians and Medes are depicted alternatively on the supporting wall of the palace area.

It is unbelievable how much assumption has gone into this reconstruction, which, after all, is entirely dependent on the records at Medinet Habu. In his introduction, Sanders frankly admits that when

“it comes to naming the people, we face an enormous question mark. It was the Egyptians who invented the Peoples of the Sea. . . . It is the Egyptian monuments—the 13th- and 12th-century inscriptions and carvings at Karnak and Luxor—that are the sources for our knowledge. … There have been many guesses as to who these peoples were, but they are only guesses.&nbsp.nbsp. . Whoever or whatever they were, the troublemakers were not ‘a people,’ and only to a limited extent were they ‘of the sea.’ ”4 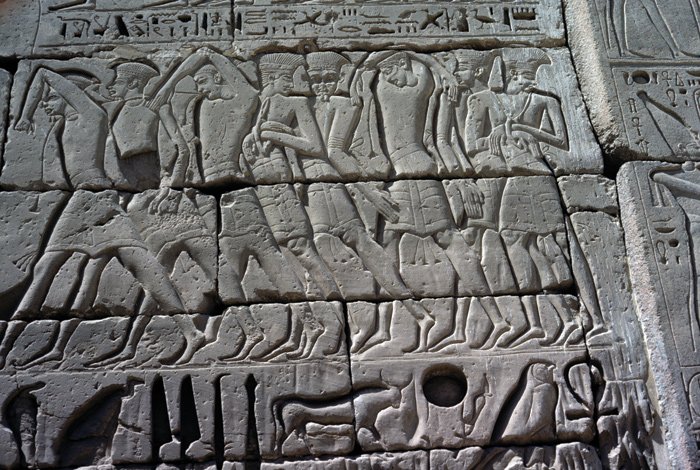 In Rameses’ temple of Medinet Habu, the headdress of captives is obviously Persian, not Philistine.

Velikovsky points out that the spelling on the wall of Medinet Habu is not Peleset, but Pereset,5 which is really the word for Persians, and their headgear is strikingly similar to what is depicted on the walls of Persepolis in ancient Persia. As for the Philistines, they were in Palestine long before the time of Rameses III. Abraham had dealings with them in the 19th century B.C. (Genesis 21:32), and so did his son Isaac (Genesis 26:1). In the 14th century, Joshua referred to “the five lords of the Philistines” (Joshua 13:3).

From a chronological point of view, it is absurd to claim that these “sea peoples” annihilated the Hittites in the 13th century B.C., when Assyrian records of the 9th and 8th centuries describe all-out war against the Hittites, and the biblical record has them alive and well in the 9th century (2 Kings 7:6). 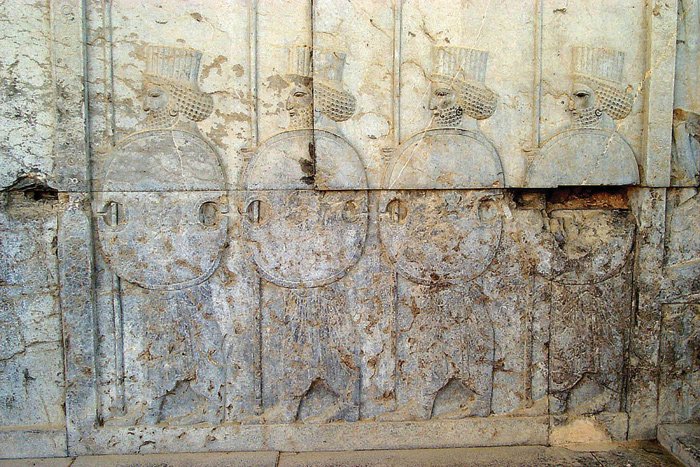 More Persian soldiers with headdress similar to that depicted on the wall of Medinet Habu.

There is another anachronism to dating Rameses III to the 13th century. He built a fortress and palace at Tel el-Yehudiya in the delta. The problem for the conventional chronology is that many tiles from the palace had Greek letters on their back sides, but the Greek alphabet was not invented until the 8th century B.C. Obviously, there is something radically wrong with the traditional dates. They need to be drastically reduced.

Velikovsky, with good reason, identifies Rameses III with Nactenebo I of Dynasty 30.6 Manetho wrote, “The 20th Dynasty consisted of twelve kings of Diospolis who reigned for 135 years.” The translation of this passage by Eusebius says they reigned for 178 years. This seems to imply that these kings reigned in succession, but nobody would go along with that today. Manetho does not name these kings, so long ago archaeologists assigned Rameses III to XI to Dynasty 20, but there was no valid reason for doing this, and these pharaohs fit better into the Persian period. 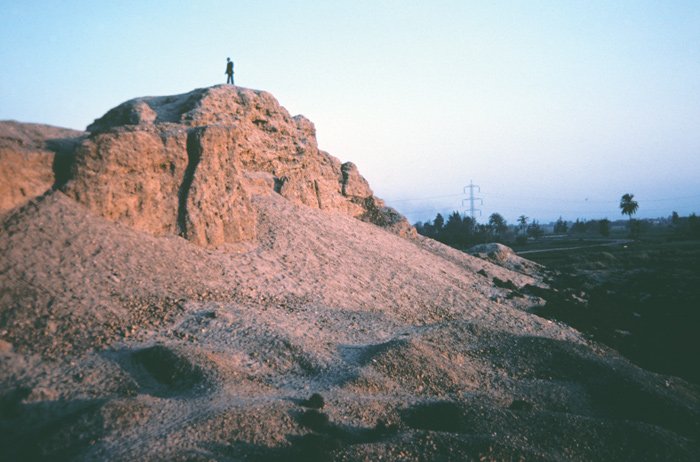 Portion of the wall around the city of Rameses III at Tel el-Yehudiya.

Cambyses, the son of Cyrus, invaded Egypt and established Persian rule over the country until the reign of Artaxerxes II. This period is known as Dynasty 27. Then Amyrtaeus established Egyptian independence and his sole reign constituted Dynasty 28. Three Egyptian kings followed in Dynasty 29, but during the reign of Nactenebo I of Dynasty 30, the Persians returned. 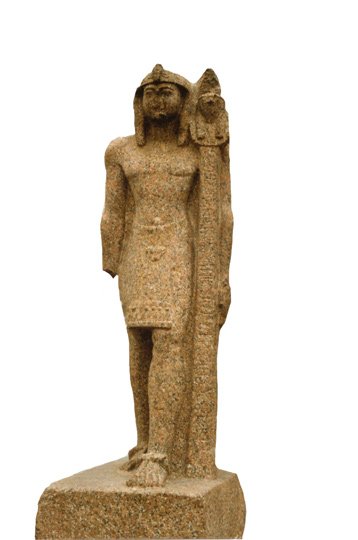 This large statue of Rameses III stands in front of the Cairo Museum. He is usually dated to the early 12th c B.C. but evidence points to a much later date.

The Egyptian name of Rameses III was Usimaremeramun-Ramesse-hekaon, but he was also known as Nekht-a-neb and should obviously be identified as Nactenebo. When he came to the throne he was on friendly terms with the Persians, but under Artaxerxes II the Persians, with Greek help, again invaded Egypt. The Persians amassed an army of 200,000 barbarians and 20,000 Greeks, but after a pitched battle near Mendes, were repulsed by Nactenebo. This is the victory depicted on the walls of Medinet Habu, the temple built by Rameses III. The Peleset mentioned there were the Persians, and the peoples of the sea were the Greeks.

Medinet Habu depicted Rameses slaying his enemies right, left, and center, but he did not die on the battlefield. His ignominious death took place at the hands of an assassin, probably as the result of a harem conspiracy.

Tachos would be Rameses IV, and Nactenebo II, the last native prince of ancient Egypt, should be identified as Rameses VI. Nothing is known of Rameses V. Nactenebo II was defeated in the delta by Persian forces and retreated to upper Egypt where he (as Rameses VI) made a beautiful tomb for himself in the Valley of the Kings at Luxor. It is one of the longest and most beautifully decorated tombs in the valley. It was his tomb that was cut above Tutankhamen’s, and the debris from his tomb effectively buried it until it was found by Howard Carter in 1922.

Nothing certain is known about the other kings of this dynasty who bore the name of Rameses. If they existed at all they would have been contemporary with other rulers, or identified with them.