The Pharaoh and the Sphinx

by David Down and Dr. John Ashton on November 19, 2009
Featured in Unwrapping the Pharaohs
Share:
Email Using:
Gmail Yahoo! Outlook Other

Thutmosis IV was out hunting and fell asleep in the shadow of the Sphinx which appeared to him in a dream.

Thutmosis IV was apparently still in his teens when he came to the throne, and he only ruled for about eight years. He had two older brothers, Nedjem and Webensenu, and there has been much speculation as to why he succeeded to the throne. What has fueled speculation is a stela which he had inscribed and installed between the paws of the Sphinx at Giza. In it he describes how he was out hunting and fell asleep in the shadow of the Sphinx which appeared to him in a dream. It promised him that if he would remove the sand that was stifling it he would be the next pharaoh. 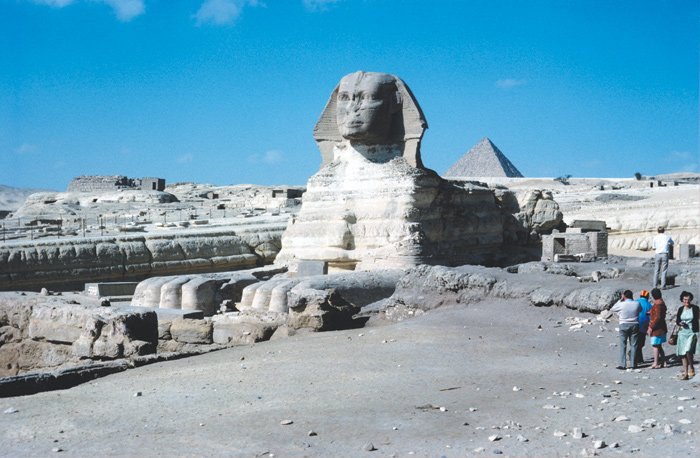 The Sphinx was sculpted during the 4th Dynasty. Between its paws is a stela inscribed much later by Thutmosis IV of Dynasty 18.

Some scholars have read into this inscription more than is really there. They conclude that this indicates that he was not the rightful heir to the throne and that he usurped it by slaying his brothers, or some even suggest that his older brothers were killed by the destroying angel who slew the firstborn sons on the night of the Israelite exodus from Egypt. A reading of the actual words should lay these suppositions to rest.

Look upon me and behold me! O my son Thutmosis, I am your father, Harmachis—Khepri-Re-Atum [the Sphinx]. I shall give to you my reign upon earth over the living, and you shall wear its red crown and its white crown on the throne of Geb the prince. To you shall belong the earth in its length and in its breadth, together with that which the eye of the All-Lord illuminates, and to you shall be apportioned provisions from within the Two Lands and the great products of every foreign country. For prolonged years already my face has been turned to you and my heart likewise. You belong to me. Behold, my state is like [that of] one who is in pain, and my entire body is out of joint. For the sand of the desert, this [place] on which I am, presses upon me. I have been waiting to have you do what is in my heart; for I know that you are my son and my champion. Approach; I am with you; I am your guide.1

No one suggests that he actually had this dream. It is more likely that Thutmosis hit on this idea to support his claim to the throne. Some kings had left king-lists on their temple walls, showing that they were the rightful heirs to a long line of legitimate kings. Hatshepsut had her birth portrayed as in the presence of the gods to show that she was destined to rule Egypt. Maybe Thutmosis came up with this novel idea to ensure that his subjects would be loyal to him. 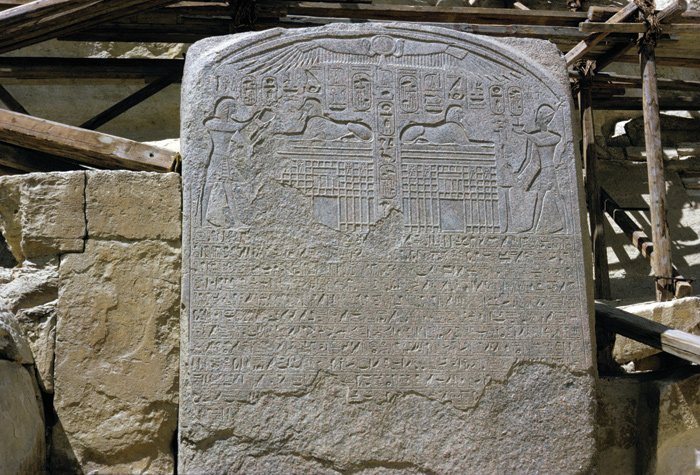 According to this stela the Sphinx is supposed to have said, “Look upon me and behold me, O my son Thutmosis. I am your father.”

At least we can be sure that this pharaoh was not the son who survived the Exodus tragedy. In the first place, a shortened chronology would place Thutmosis IV centuries after the Exodus occurred, and even the traditional chronology would find this idea embarrassing. There is no trace of large numbers of Israelite slaves at this time, and there is no sign of a major disaster befalling the nation of Egypt such as must have occurred if the ten devastating plagues had struck Egypt at this time. Certainly, the Egyptian army was not drowned in the Red Sea or anywhere else.

Life went smoothly under Thutmosis IV. In fact, things were never better. Tribute continued to flow into the Egyptian coffers, and Thutmosis did not find it necessary to wage any war to bring recalcitrant nations to heel. In fact, there is evidence to show that he successfully relied on political diplomacy to maintain the status quo. He even had time to devote to religious exercises. It is during his reign that we find the first move to make the sun disc Aten the supreme deity of Egypt.

Thutmosis was probably only in his twenties when he died prematurely. His statues show him as quite robust, but his mummy reveals him as emaciated, his ribs protruding, and his genitals rather diminutive, so scholars have concluded he died of some wasting disease. 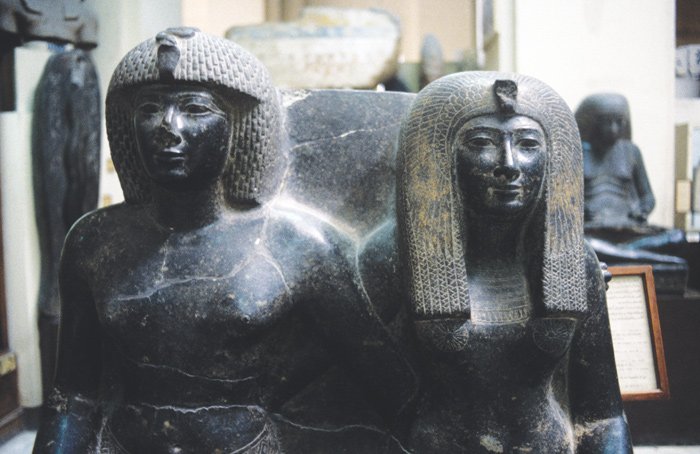 A beautiful statue in the Cairo Museum of Thutmosis IV with his mother, Tia.

In 1903, while Howard Carter was working for Theodore Davis, he discovered the tomb of Thutmosis in a remote valley near the Valley of the Kings. In the tomb were ushabtis (funerary statues), ritual vessels, implements, cult statues, ankhs (small crosses with a loop at the top), and 19 blue-glazed boomerangs. There was also the body of a chariot in his tomb, the earliest Egyptian chariot ever found.

There was a large handsome sarcophagus in his tomb, but his body was not in it. His mummy was found in the tomb of his father Amenhotep II and was one of the nine mummies that had been collected by the priests of Dynasty 21 and reburied for safe keeping.

Previous Chapter The Mighty Archer Next Chapter Amenhotep the Magnificent