The Pyramid of Menkaure

by David Down and Dr. John Ashton on August 27, 2009
Featured in Unwrapping the Pharaohs
Share:
Email Using:
Gmail Yahoo! Outlook Other

Khafre was succeeded by Menkaure, who was the last great pyramid-building pharaoh at Giza. However, his tomb is the smallest of the Giza pyramids.

It is only 354 feet x 354 feet (108 m x 108 m) and 203 feet (62 m) in height, at an angle of 51 degrees, but it has some unique features. It was not completely faced with white limestone. The lower 16 layers are faced with blocks of red granite brought from Aswan, and their shape has given a valuable clue to pyramid construction. The lower ones have not been smoothed, indicating that the facing stones were first placed in position and then masons started at the top and worked down smoothing the stones as they went. We can only speculate on how they clung to the face of the pyramid as they smoothed the stones. 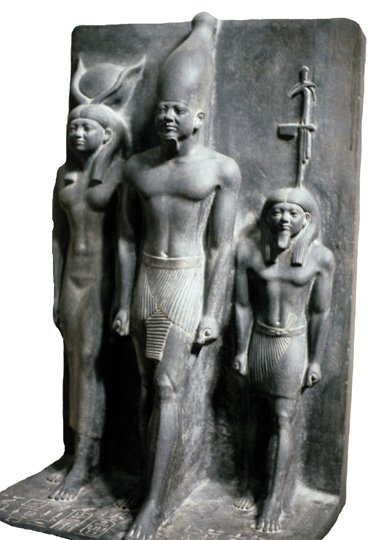 Many beautiful triple statues of Menkaure flanked by deities were found near his pyramid.

The inside design is also very different. From the north side, a passage descends into bedrock terminating in an ante-chamber. At the west end of this chamber is the king’s tomb chamber, which is at a lower level and has a gabled roof, also of granite. The underside of these roofing blocks has been chiseled into the shape of an arch on which has been painted the name of Menkaure. The walls of the tomb chamber are also lined with granite.

The tomb chamber is reached by steps leading down to the doorway. Menkaure must have been more of a family man because on the way down there is another tomb chamber with four burial niches in it, presumably for family members. 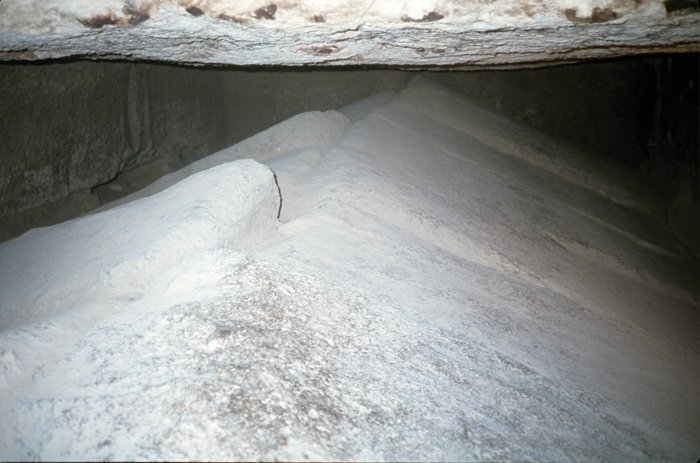 Menkaure’s tomb chamber was cut out of the bedrock and was lined with stone slabs with a gable roof.

Colonel Vyse found a beautiful basalt sarcophagus in the tomb. It was carved with figures on the outside, and he considered it so valuable that he decided to send it back to England. With great difficulty, he maneuvered it out of the tomb, up the steps to the ante-chamber, and up the ascending passage to the outside. Then he loaded it onto a ship to take it to England. Unfortunately, a storm hit the ship soon after it had passed through the straits of Gibraltar into the Atlantic Ocean, where it sank with its valuable cargo. 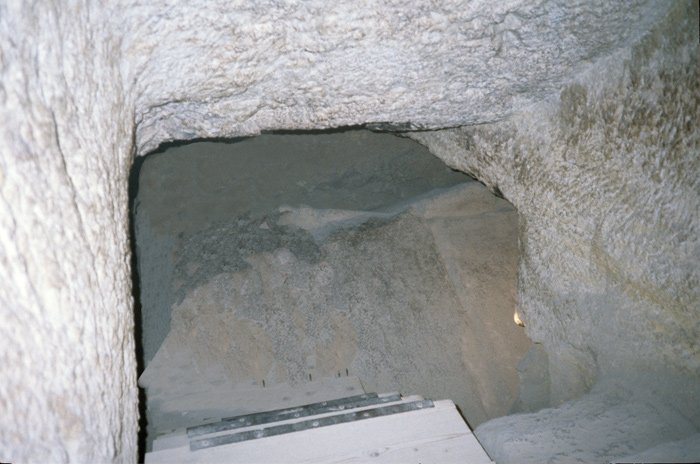 The top of the roof can be accessed through an opening from his ante-chamber.

In the ante-chamber, Vyse also found some human bones and the lid of a coffin on which the name of Menkaure was inscribed. It is now in the British Museum. On the south side of his pyramid are three smaller pyramids. The center one contained the bones of a young woman. On the east of the pyramid is a mortuary temple built of some massive blocks of limestone weighing up to 200 tons each. In this temple there were four immaculate statues, smaller than life size, of Menkaure flanked by goddesses. There may originally have been 42 such statues representing all the Egyptian nomes (provinces). Also found in this temple was a statue of Menkaure and his queen Khamerernebty. It is now in the Boston Museum. 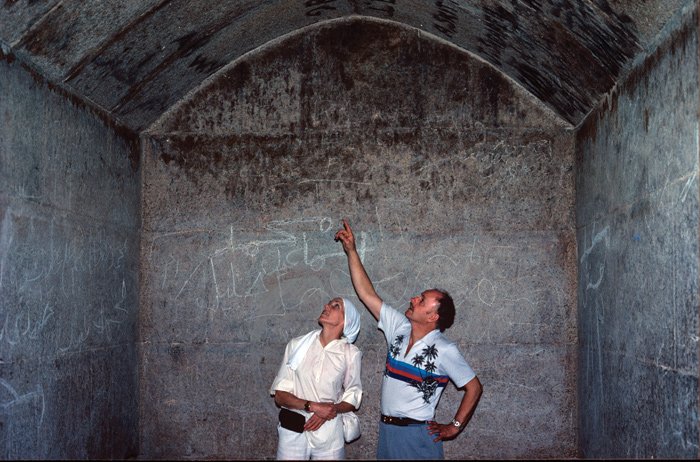 The inside of the ceiling of his tomb chamber has been cut to an arch.

Only one boat pit has so far been found in the vicinity of the pyramid, and that was only discovered in 1998, but between the large pyramid and the queens’ pyramids a large statue of Rameses II was found recently. What a 19th Dynasty statue was doing at the pyramids, which must have been deserted at the time, is a mystery.

In the north face of the pyramid is a deep vertical hole. Stones were removed from here in A.D. 1196 by Malek Abd al-Aziz Othman ben Yusuf, the son of the well-known Muslim conqueror Saladin. He planned on dismantling the pyramid to obtain the stones for buildings in Cairo. Fortunately, he ran out of steam at the end of eight months, but still he made an unsightly gash in the front of the pyramid. 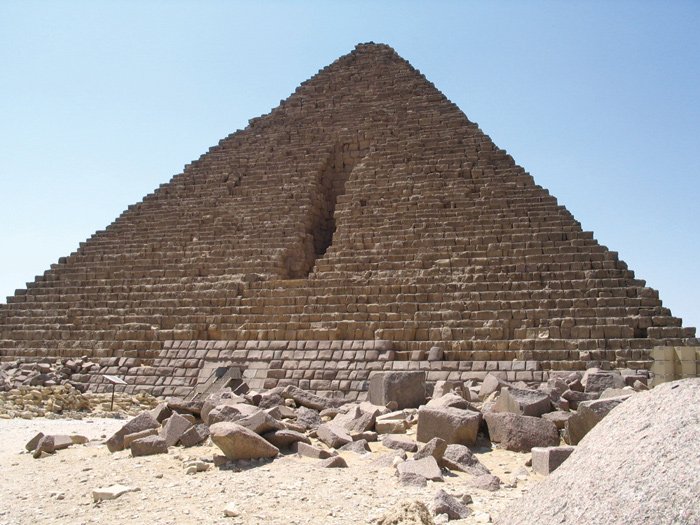 Stones were removed from here in 1196 by Malek Abd al-Aziz Othman ben Yusuf, the son of the well-known Muslim conqueror Saladin.

Actually, in the 12th century A.D. a scholar by the name of Abd al-Latif was in the new city of Cairo, and he left a record of what he saw. He said that there was a lot of unknown writing on the face of the pyramids, which suggests that the facing stones were then mostly still intact, though they were being quarried for stone for the city walls. This writing was probably graffiti left by early visitors to the pyramids. Latif also described the nose of the Sphinx which must have still been there in his day. 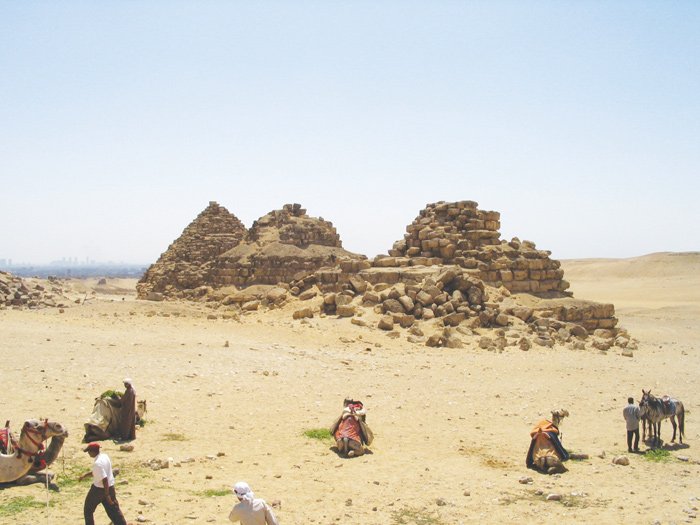 Behind his pyramid Menkaure built three smaller pyramids for his queens.

There was probably only one more king in the 4th Dynasty and his name was Shepseskaf. Possibly because of a flagging economy, instead of being buried in a pyramid, he chose to be buried in a mastaba in Saqqara. Nevertheless, it was an enormous mastaba, 327 x 246 feet (100 m x 75 m) in area. It was faced with white Tura limestone, except for the lowest course, which was of red granite. Beneath the mastaba was a stone arched burial chamber not unlike Menkaure’s. In it was a stone sarcophagus also similar to the one found in Menkaure’s tomb. He also had burial niches, six in number.