Transition to a New Dynasty

by David Down and Dr. John Ashton on December 17, 2009
Featured in Unwrapping the Pharaohs
Share:
Email Using:
Gmail Yahoo! Outlook Other

Tutankhamen died childless with no heir to the throne, and what happened next is open to question.

An unsigned letter found among the Hittite archives may have been from Ankhesenamen to the Hittite king Supililiumas. It read, “My husband has died, and not one son do I have. But of you it is said that you have many sons. If you will give me a son of yours he could be my husband. For how may I take one of my slaves and make him a husband and honor him.” 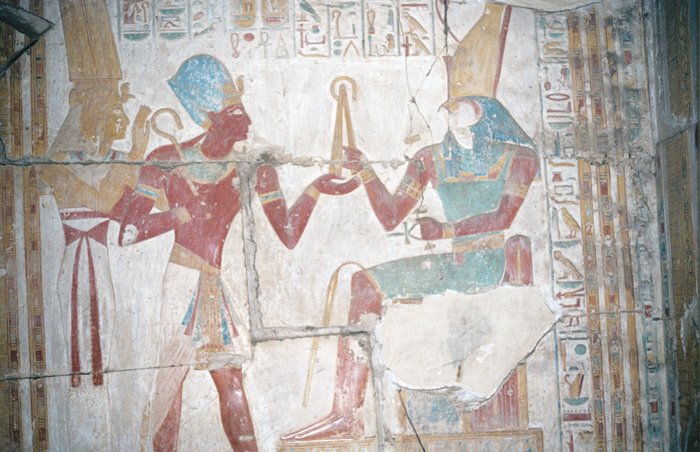 In the temple of Sethi I at Abydos are some very colorful reliefs. The temple is off the beaten track and its roof has never been removed, and with no exposure to the elements the reliefs have retained their color.

The possible implications of this letter are breathtaking. A Hittite king sitting on the throne of Egypt? It would have changed the history of the Middle East, but it was not to be. Even the Hittite king was staggered by the request and suspected that it might be a political trap. He cautiously sent a delegation to Egypt to ascertain if the offer was genuine. It was indeed genuine, and the delegation returned with another plaintive letter from the Egyptian widow.

It read, “Why have you spoken these words, ‘They wish only to deride me’? I have not written to any other country. To you alone have I written. It is said that you have many sons. Give me a son of yours. He shall be my husband and king over Egypt.” 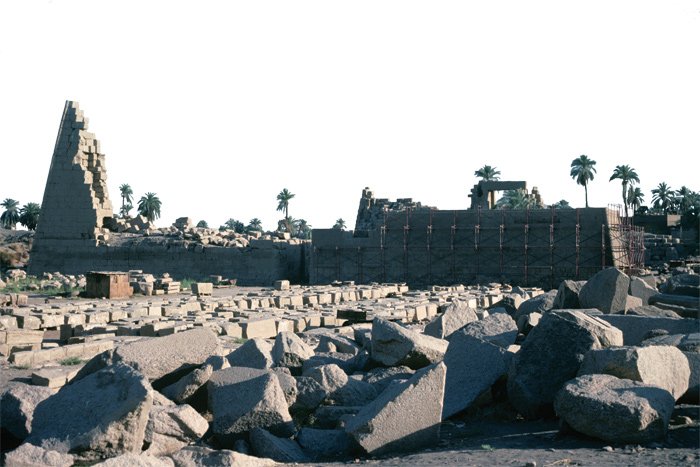 Harmheb, last king of Dynasty 18, contemptuously filled his pylon with blocks of stone from the temple of Akhenaten which he had demolished. In turn, archaeologists have partially demolished his pylon to retrieve the stones from Akhenaten’s temple.

Supililiumas was convinced and sent his royal prince Zananza to Egypt, but the delay proved fatal. A crafty soldier-statesman by the name of Eye, possibly a brother of Tutankhamen’s grandmother, seized the throne and had the Hittite prince assassinated and may have inducted Ankhesenamen into his harem. This would have added prestige to his claim to the throne, but some have disputed this turn of events. They point out that his tomb inscription names Tiya as his wife, but a finger ring of his associates him with Ankhesenamen, and after all, he could have had both.

In any case, Eye died after only four years and was succeeded by another army general by the name of Harmheb, who had gone along with the Aten religion but had been chafing at the imposition of the worship of Aten. He vigorously set about fully restoring the worship of Amun and tried to destroy all memory of the worship of Aten. He demolished the huge temple that Akhenaten had built east of the temple of Karnak and contemptuously used many of the blocks of stone as filling for the new pylon he built at Karnak for a memorial to himself, but that idea came unstuck. When archaeologists found some of these blocks they were more interested in collecting these blocks with a view to reassembling them than they were in Harmheb’s pylon, which now lies in ruins. There are plans to rebuild the original pylon, but a lofty crane has been standing on the site for years without any sign of reconstruction. 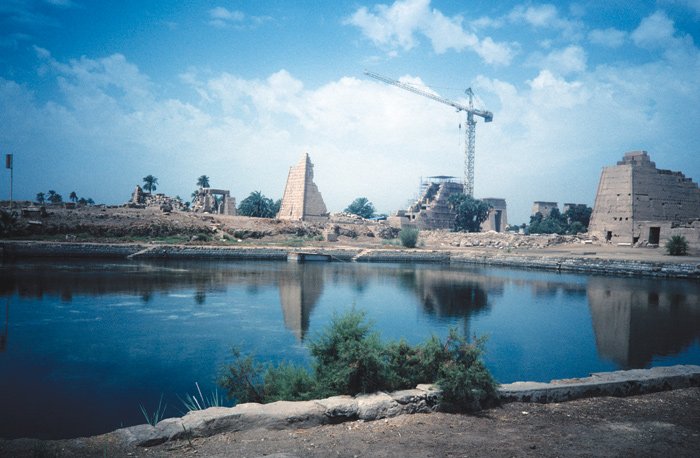 The sacred lake of the temple of Karnak, with the damaged pylon of Harmheb in the background.

Harmheb’s men went all over the land of Egypt chiseling not only Akhenaten’s name from monuments, but also the names of Tutankhamen and Eye, and he dated his own reign from the time of Akhenaten’s accession to pretend that the latter never existed. Harmheb also had no male heir, and he willed the throne to his vizier who became known as Rameses I, who is regarded as the first king of Dynasty 19.

This Rameses only ruled for one year, and the only worthwhile thing he did was to father a son known as Sethi I, who became a great warrior king. Rameses’ mummy has also created a lot of news recently. In 1861, an unknown traveler bought a mummy from grave robbers in Egypt and took it back to Canada where it was put on display in the Niagara Falls Museum, but the museum went broke and sold off its antiquities to meet its debts. 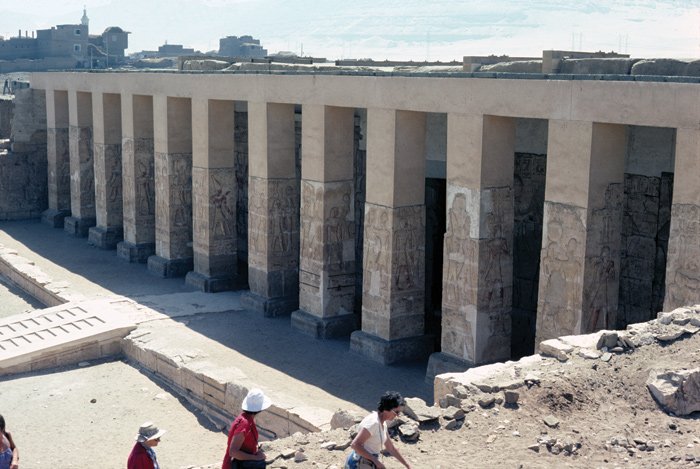 Front ornamental pillars of the temple of Sethi I at Abydos.

The Atlanta University Museum in the United States purchased the entire Egyptian collection, including the royal mummy. The university had to orchestrate a well-publicized fund-raising campaign to raise the money. The collection went on display in January 2000.

Peter Lacovara, the curator of ancient art at the Atlanta museum, was very excited at the possible identification of this mummy. He considers the prominent hook nose of the mummy to be distinctive of the 19th Dynasty rulers, and inside his wrappings his arms are crossed and his toes separated by gold plates, as were other kings of that dynasty. He believes it is the mummy of Rameses I. 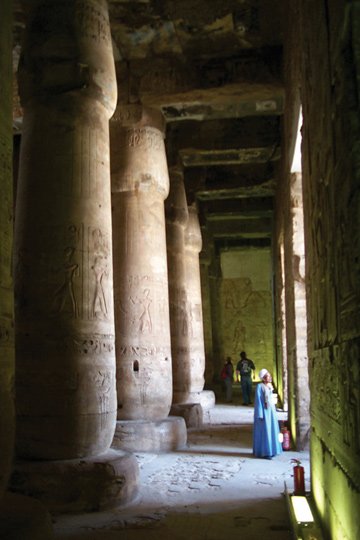 Ornamental columns at the front of the temple of Sethi I at Abydos.

Representatives of the Egyptian government were invited to Atlanta to view the mummy and discuss the identification, but the Egyptians were more concerned about who really owns the mummy. They say it was taken from Egypt illegally and should be returned. The story had a happy ending when the American museum agreed to allow the mummy to be returned to Egypt where it was received with due honor and much rejoicing.

Sethi I, son of Rameses I, had been an army general under Harmheb. Authorities differ on the length of his reign, anywhere between 11 and 20 years. He seems to have moved his activity to Avaris but maintained his capital in Luxor. He commenced the building of the massive hypostyle hall with its many columns in the temple of Karnak and built an impressive temple at Abydos, which has survived very well because it is off the beaten track. The roof is still in place and its five inner shrines have been protected from the sun, making the reliefs the most colorful of any that are still to be seen in Egypt. 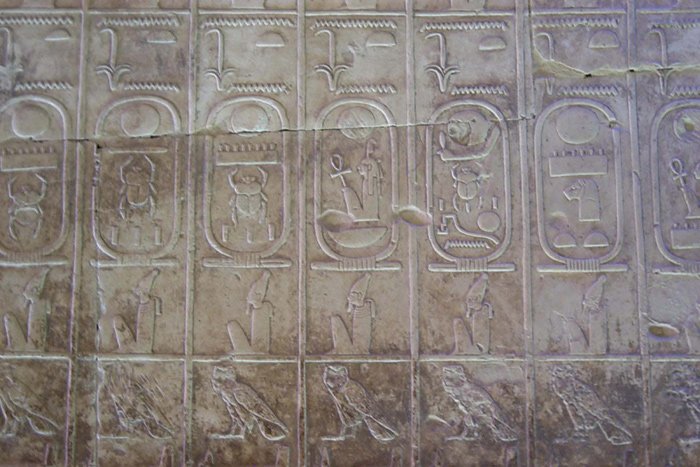 Each cartouche (oval) in Sethi’s king-list contains the names of the kings preceding Sethi I.

This being near the beginning of a new dynasty, Sethi was apparently eager to establish his right to the throne, and on the wall of his Abydos temple is a king-list beginning with Menes. He must have been anxious about the future because he early crowned his youthful son Rameses II as co-regent. The boy with a side lock is shown in this king-list, holding a scroll in his hand.

Having been an army general, it is not surprising that Sethi was eager to undertake, in his first year, a military invasion of the lowlands of Palestine and Syria to quell a rebellion. He left a graphic relief of this military expedition on the outside north wall at Karnak. This was no idle boast, because archaeologists at Bethshan unearthed two victory stelae which he had left there. 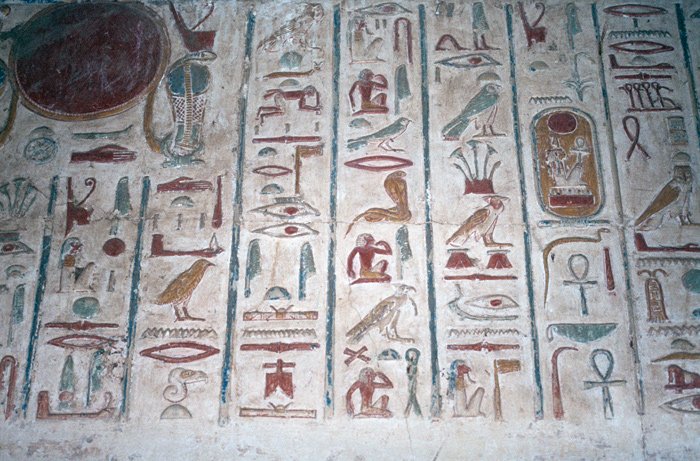 Artistic hieroglyphic writing on the wall of the temple of Sethi I at Abydos, well-preserved because the roof of the temple survived intact, preventing the sunlight from fading the pictures. 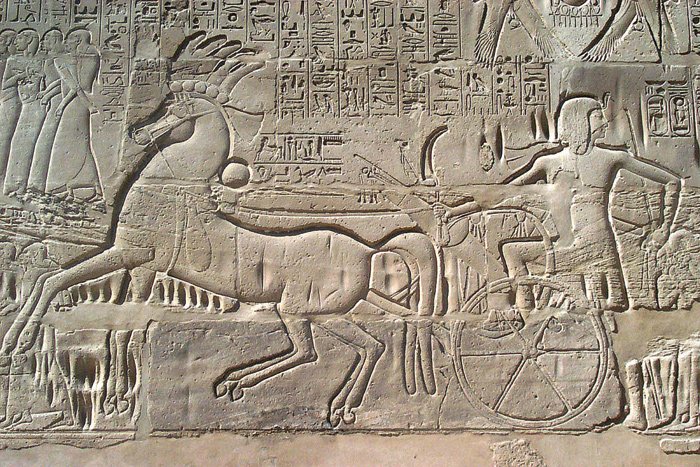 On the north wall of the temple of Karnak, Sethi mounts his chariot to make war with his enemies.

Back home, his relief boasted,

“He exults at beginning the battle, he delights to enter into it, his heart is gratified at the sight of blood. He lops off the heads of the dissidents. More than the day of rejoicing he loves the moment of crushing [the foe]. His majesty slays them at one stroke—he leaves them no heirs, and whoever escapes his hand is brought prisoner to Egypt.”2

Sethi built a small but delicate mortuary temple on the west bank at Luxor, and his tomb is the longest and deepest in the Valley of the Kings—more than 328 feet (100 m) in length. On the walls the tomb paintings retain their brilliant color, and on the roof are pictured the heavenly constellations.

His mummy was a masterpiece of embalming. The body has been hacked about by tomb robbers, but his face is the best-preserved and most lifelike of any of the royal mummies. He seems to be peacefully sleeping.