by David Down and Dr. John Ashton on October 15, 2009
Featured in Unwrapping the Pharaohs
Share:
Email Using:
Gmail Yahoo! Outlook Other

It was inevitable that sooner or later there would be a war of liberation, and it came at the end of the 17th Dynasty.

What may have triggered this war makes strange reading, if the archaeologists’ conclusions are correct. 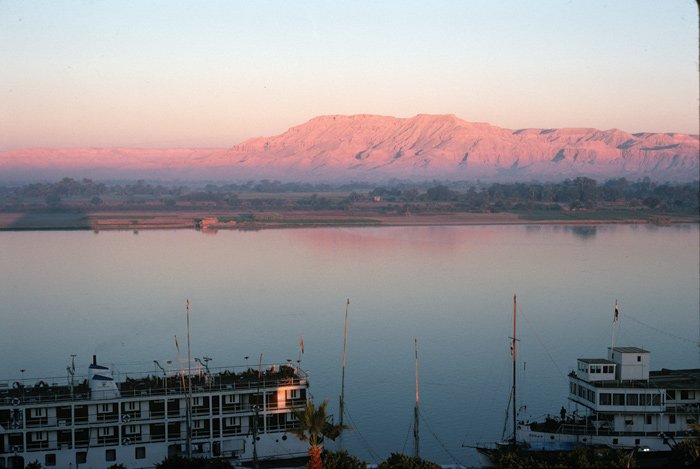 At sunrise, a warm glow bathes the hills in which the Valley of the Kings is located on the west bank of the Nile River at Luxor.

The last score or so of kings assigned to the 13th Dynasty were clearly only local rulers—Lower Egyptian vassals of the Hyksos or Upper Egyptian dynasts, reigning at most over a few nomes and frequently over no more than a single town.1

Furthermore, as we have already noted at the beginning of the last chapter, Dynasty 14, as assigned by Manetho, may never have existed as a separate dynasty. The Hyksos constituted the 15th and 16th Dynasties ruling from the delta, and the 17th Dynasty ruled in the south, nominally subject to their Hyksos overlords. It was during the reign of Seqenenre, the 14th king of this Theban Dynasty, that a delegation came from the Hyksos king Apophis to complain about a canal which the former was digging. He said, “Cause to be abandoned the hippopotamus canal, that lieth in the well-spring of the city, for it suffereth not sleep to come to me either by day or by night; its noise is in mine ear.”2 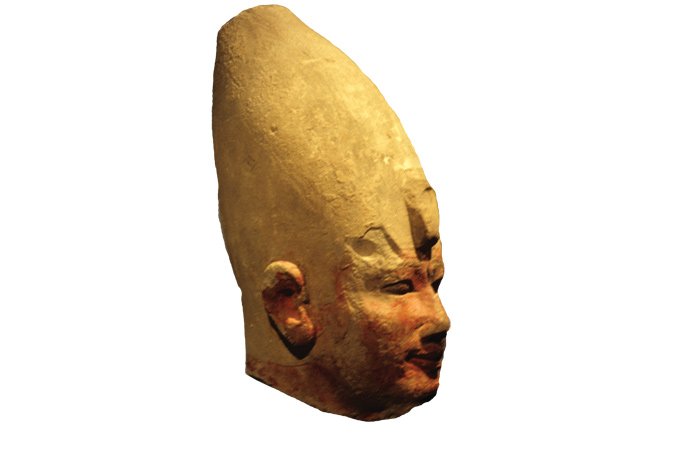 Amenhotep I was the second king of the 18th Dynasty, which filled the vacuum left by the expulsion of the Hyksos.

Seqenenre showed due respect to the ambassadors from the north. “The prince of the southern city lamented and wept a long time, and it befell him that he could not answer the messenger of King Apophis (finally he promised). All that thou sayest to me I will do.”3

There is no inscription saying what happened next, but once the ambassadors had departed we can just imagine the indignation at the royal court. It was obviously a trumped-up charge. The very idea of hippopotami keeping the Hyksos king, who was about 497 miles (800 km) away, awake at night was absurd. Seqenenre may have said to his courtiers, “Enough is enough. I’m going to drive these fellows out of the land.” 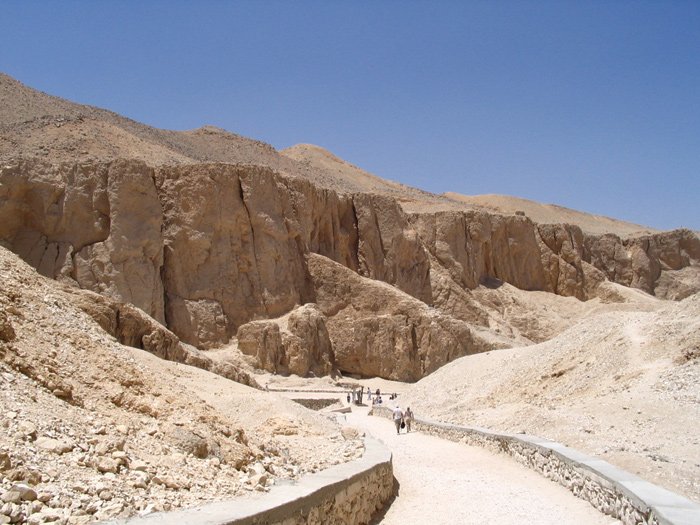 Amenhotep I was the first pharaoh to recognize that pyramids were not the answer for the preservation of royal mummies. He had his tomb chiseled out of the Valley of the Kings at Luxor.

Nor is there any record of Seqenenre waging a war against the Hyksos, but his mummy is in the Cairo Museum and there are two savage gashes in its forehead, obviously inflicted by a battle axe. His body was partially decomposed before it was mummified, so he may have lain on the battlefield for some days before it was rescued. It has been concluded that he died in the war of liberation.

However, in 1954 a stela of his son Kamose was found at Karnak, and it told of his attack on the Hyksos capital city of Avaris. He seemed very pleased with his accomplishments. “I went north because I was strong enough to attack the Asiatics through the command of Amun, the just of counsels. My valiant army was in front of me like a blast of fire. . . . When day broke I was on him like a falcon. When the time of breakfast had come I attacked him. I broke down his walls, I killed his people, I made his wife come down to the riverbank. My soldiers were as lions.”4 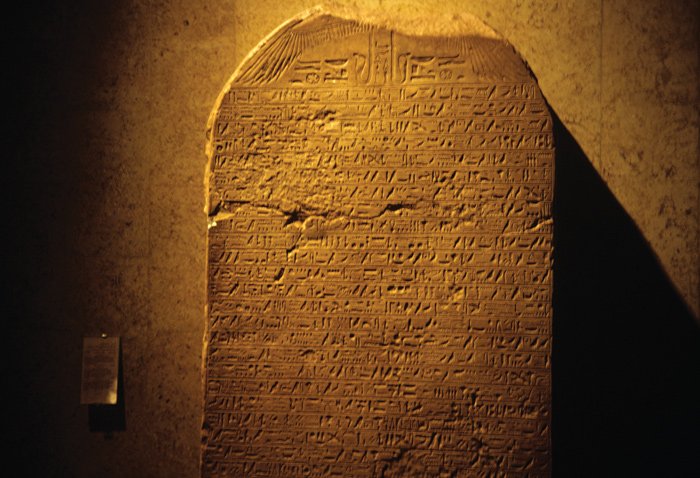 This stela tells how Ahmosis fought against the Hyksos in the initial stages of the war of liberation.

Despite his boasting he was apparently not completely successful, and it was left to his brother, Ahmosis, to complete the job. Strange to say, the record of this pharaoh’s activities comes not from the pharaoh, but from the wall of the tomb of his trusted army commander, Ahmose, the son of Abana. It reads, “Pharaoh besieged the city of Avaris. . . . Avaris was captured. I took captive there one man and three women, total four persons. His majesty gave them to me for slaves. Pharaoh besieged Sharuhen, and in the sixth year his majesty took it.”5

Sharuhen was south of Gaza, and that is the last we hear of the Hyksos, which raises the question, who were they and why did they suddenly disappear from the pages of history? Velikovsky and Courville both come up with the same answer—they were the Amelekites who attacked the Israelites after they left Egypt. For this cowardly act on a defenseless people, a curse was pronounced upon them. “Then the Lord said to Moses, ‘Write this for a memorial in the book and recount it in the hearing of Joshua, that I will utterly blot out the remembrance of Amalek from under heaven’ ” (Exodus 17:14). 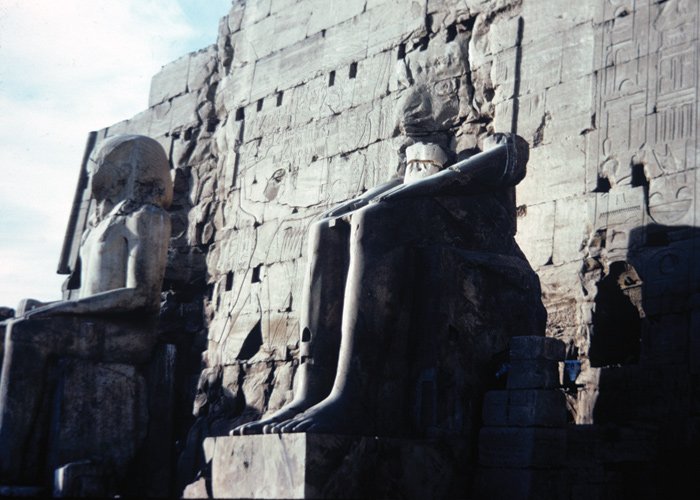 Two statues of Amenhotep I today stand in front of one of the south walls of the Temple of Karnak.

The Amelekites would have learned from the Israelites they captured that the Egyptian army had been destroyed in the Red Sea, and would have taken the opportunity to occupy Egypt. This would have been during the time of Joshua and the judges that followed him. God reminded the last judge, Samuel, of the curse that was awaiting fulfillment.

“Samuel also said to Saul. . . . Now go and attack Amalek, and utterly destroy all that they have. . . . And Saul attacked the Amalekites, from Havilah all the way to Shur [possibly Sharuhen], which is east of Egypt. He also took Agag king of the Amelekites alive, and utterly destroyed all the people with the edge of the sword” (1 Samuel 15:1–8). No wonder archaeologists who cling to the old chronology can’t find them! They were obliterated. 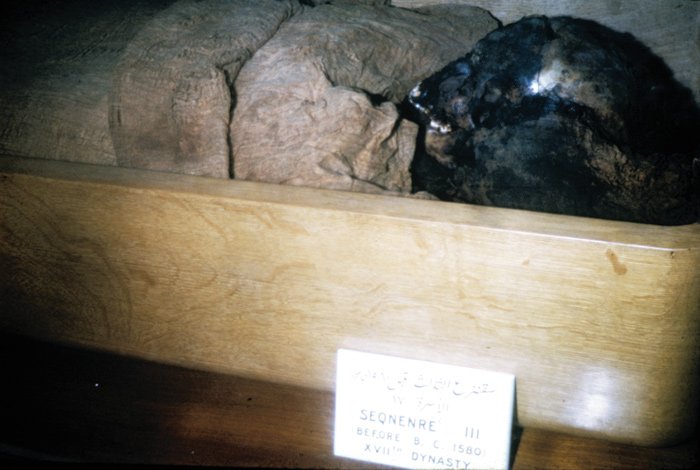 The mummy of Seqenenre displays two savage gashes in his forehead, presumably caused by blows inflicted by a battle axe.

Ahmosis, who Manetho assigned as the first king of the 18th Dynasty, ruled for 25 years and was succeeded by his son Amenhotep I, who was married to his full sister Meryetamen, but he had no children. His first act was to quell a disturbance in Kush, then Libya. Thutmose, the son of Abana, was still on the go and obliged us with this information, not neglecting to sing his own praises. “His majesty captured that Nubian bowman in the midst of his army. They were carried off in fetters, none of them missing. The fleeing were destroyed as if they had never been. Meanwhile I was at the head of our army. I fought incredibly.”6

Amenhotep I was the first pharaoh to abandon the pyramid system of burial and had his tomb dug in the Valley of the Kings. His mummy has never been unwrapped but it can be determined that he was not a tall man, only about 5’4” (1.65 m) in height.