by David Down and Dr. John Ashton on January 14, 2010
Share:
Email Using:
Gmail Yahoo! Outlook Other

From about 700 B.C., there are no further major chronological problems, both because of the proliferation of source material, and synchronisms with neighboring countries.

Pharaoh Taharka of the 25th Dynasty ruled 690–664, and he is identified in the Bible as “Tirhakah king of Ethiopia” (2 Kings 19:9) who confronted Sennacherib, king of Assyria, who was campaigning in Judah at that time. He is accurately called king of Ethiopia because he was a Nubian king who had invaded Egypt. The word Ethiopia in the Bible is always translated from the Hebrew word Kush, meaning Nubia (Sudan) to the south of Egypt. 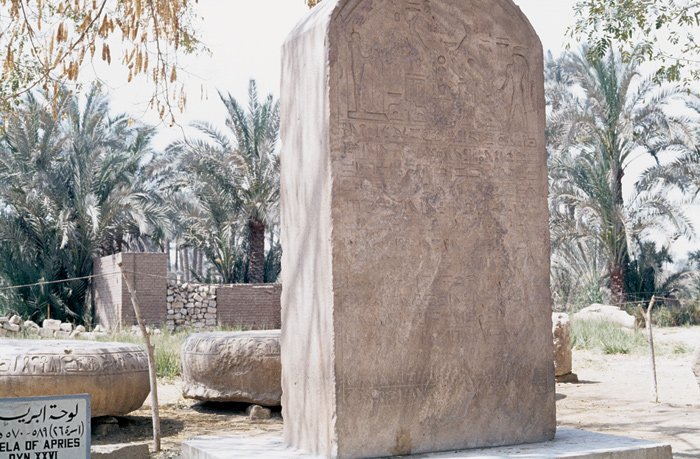 The stela of Pharaoh Hophra in the open-air museum at Memphis. The prophet Jeremiah predicted, “I will give Pharaoh Hophra king of Egypt into the hand of his enemies” (Jeremiah 44:30). History reveals that Hophra was assassinated.

The Egyptians often referred to “wretched Kush” in their inscriptions, and they had made frequent forays into their country, but the Nubians had the last laugh. There were no strong Egyptian rulers at the time, and they were able to overcome all resistance and occupy the whole land of Egypt.

There is no record that Esarhaddon captured Taharka, but back home he tried to convince his people that he had. The prophets of Judah later predicted the ultimate downfall of Egypt, and Ezekiel wrote, “The Lord came to me, saying, ‘Son of man, set your face against Pharaoh king of Egypt. . . . Speak and say . . . . I will put hooks in your jaws” (Ezekiel 29:1–4). This is what Esarhaddon claimed he had done because the stela he had made, a copy of which is just inside the door of the Cairo Museum, shows Esarhaddon holding two ropes, one of which is looped under Taharka’s chin, attached to an iron hook through Taharka’s jaw. This was apparently the way the Assyrians did things. 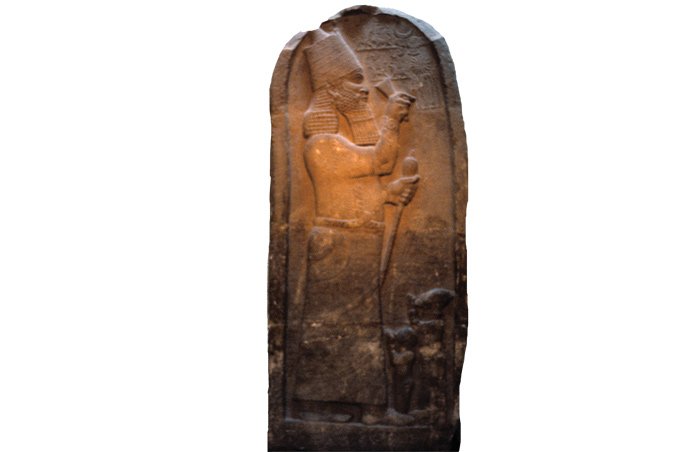 An Assyrian stela shows Esarhaddon holding a rope attached to an iron hook fastened into Taharka’s jaw. The prophet Ezekiel referred to this practice.

When Esarhaddon retreated from Egypt, Taharka staged a comeback and re-occupied Memphis, but the next Assyrian king, Ashurbanipal, took a dim view of this and marched on Egypt, forcing Taharka to retreat to Luxor. Ashurbanipal pursued him to Luxor, and Taharka deemed it the fruit of wisdom to return to his native land in Kush.

Taharka was not done with and staged yet another comeback, returning to Luxor, but his hour had come. He died in 664 B.C. and was buried in the pyramid he had prepared for himself. It was the largest pyramid ever built in Kush, though a shadow of the great Egyptian pyramids, only 171 feet (52 m) square. When opened by archaeologists it was found to contain some of his funerary equipment and a few fragments of his skull. 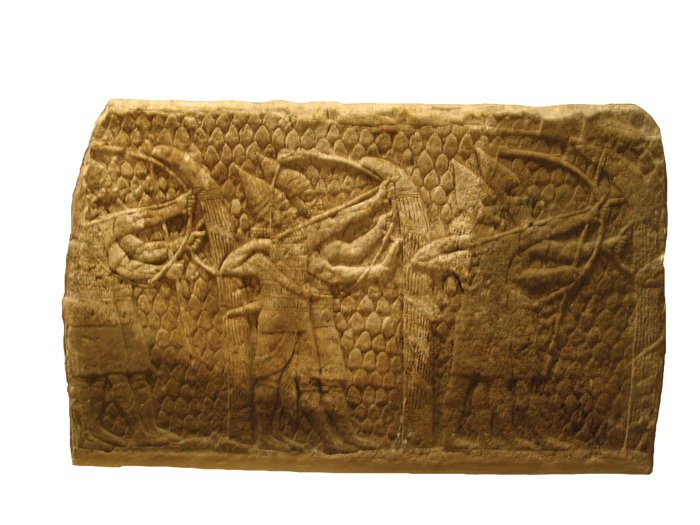 Taharka was succeeded by his nephew Tanutamun who raised an army and marched northward, reimposing Kushite control over Egypt, but he had to reckon with the Assyrian king Ashurbanipal, who sent an army to Egypt. It succeeded in reaching Luxor, where it pillaged the temple of Karnak of its treasures.

The Assyrians appointed local rulers to look after their interests. One of these was Psamtik, who decided to do a little ruling on his own account, and, with the decline of Assyrian power, he eventually took over the whole of Egypt, becoming the first king of Dynasty 26. By his ninth year, he could claim to be a pharaoh ruling over a united Egypt. He ruled for 54 years, one of the longest ruling pharaohs on record. 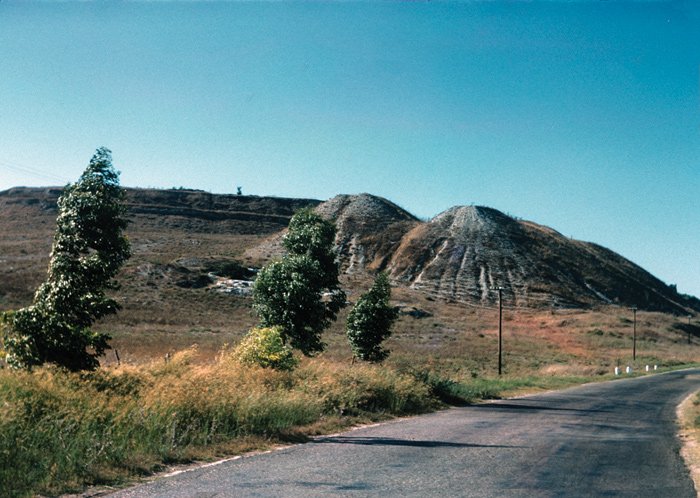 He was followed by his son Necho II, who claimed he had a divine mandate to march north and assist the remnants of the Assyrian army to confront the Babylonians who were trying to assert their authority over the Middle East. When he reached Megiddo, the Judean king Josiah opposed him. “Necho king of Egypt came up to fight against Carchemish by the Euphrates; and Josiah went out against him. But he sent messengers to him saying, ‘What have I to do with you, king of Judah? I have not come against you this day, but against the house with which I have war; for God commanded me to make haste. Refrain from meddling with God, who is with me, lest He destroy you’ ” (2 Chronicles 35:20–21). 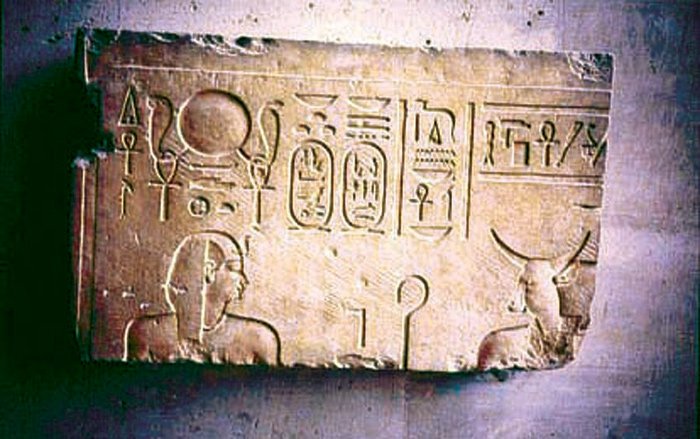 This relief belongs to Nactenebo II, the last native king of Egypt.

Josiah had other thoughts about the mind of God and fought with Necho at Megiddo, but “the archers shot King Josiah; and the king said to his servants, ‘Take me away for I am severely wounded’ ” (2 Chronicles 35:23). His servants transferred him to another chariot and took him to Jerusalem where he died.

Necho continued on his journey but was defeated by the Babylonians. However, he still retained enough power to summon Jehoahaz, the newly elected king of Judah, to Syria and imposed a heavy tribute of 120 talents of silver and one talent of gold on the land of Judah. He then deposed Jehoahaz and replaced him with his brother Eliakim, whose name he changed to Jehoiakim, and took Jehoahaz off to Egypt as a hostage (2 Kings 23:33–34). 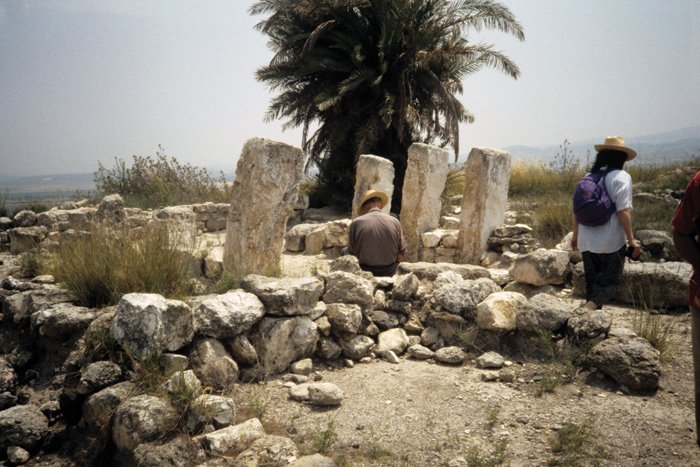 Pillars in Megiddo were once thought to be part of Solomon’s tables. They are now thought to be more likely pillars supporting a store room.

Back home, Necho started digging a canal between the River Nile and the Red Sea, but died in the year 595 B.C. and was replaced on the throne by his son Psamtik II, whose reign was short-lived.

The next king was Pharaoh Hophra, whose Greek name was Apries. He left a stela, which is now in the Memphis visitors center, and had an obelisk made that finished up in Rome. It is now standing on the back of a marble elephant just to the rear of the Pantheon.

Hophra had an army general whose name was Amasis who staged a rebellion against him. In 570 B.C., Amasis defeated Hophra, who sought refuge in Babylon. Three years later, he rounded up an army and marched against Amasis but was again defeated, and initially allowed to live, but the prophet Jeremiah had predicted, “Thus says the Lord: ‘Behold, I will give Pharaoh Hophra king of Egypt into the hand of his enemies and into the hand of those who seek his life” (Jeremiah 44:30). The Egyptian people had had enough of Hophra, and, according to Herodotus, Amasis handed him over to them and they strangled him to death. 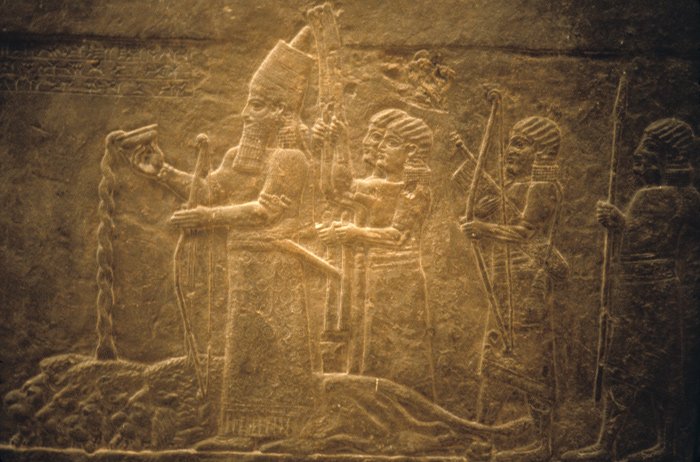 The Assyrian King Ashurbanipal offering a libation over some lions he slew with his bow and arrows.

Amasis was the last of the great pharaohs, reigning for nearly half a century, 569–526 B.C. Ezekiel, the prophet of Judah who had been exiled to Babylon, and was no doubt familiar with Hophra’s presence there and his attempts to restore Egypt to its greatness, predicted, “Thus says the Lord God: ‘I will also destroy the idols, and cause the images to cease from Noph [Memphis]; there shall no longer be princes from the land of Egypt’ ” (Ezekiel 30:13). “It shall be the lowliest of kingdoms; it shall never again exalt itself above the nations” (Ezekiel 29:15). 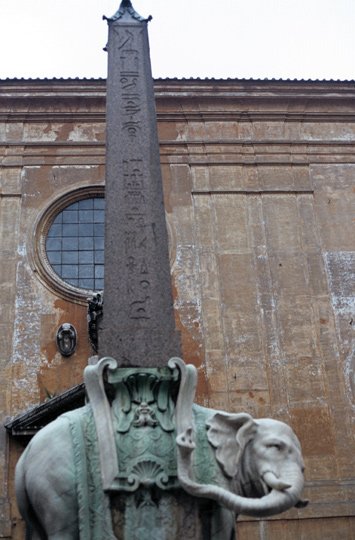 Pharaoh Hophra is mentioned in the Bible record (Jeremiah 44:30). His obelisk today stands on top of a marble elephant beside the Pantheon in Rome.

The prophecy seemed to meet swift fulfillment because Amasis’ son Psamtik III had only been on the throne for one year when Persian forces under Cambyses marched into Egypt, and this Persian occupation became recognized as Dynasty 27, which lasted intermittently for more than a century. During this time, the canal from the Nile to the Red Sea was completed.

There was a brief respite for Egypt when Amyrtaeus took advantage of Persian weakness and established Dynasty 28, of which he was the sole ruler, and lasted for only six years. Dynasties 29 and 30 continued to maintain Egyptian independence. Nactenebo I (Rameses III) was the first king of Dynasty 30 and Nactenebo II (Rameses VI) was the last Egyptian prince ever to rule over the land of Egypt. In 341 B.C. the Persians returned, and their brief rule is known as Dynasty 31. 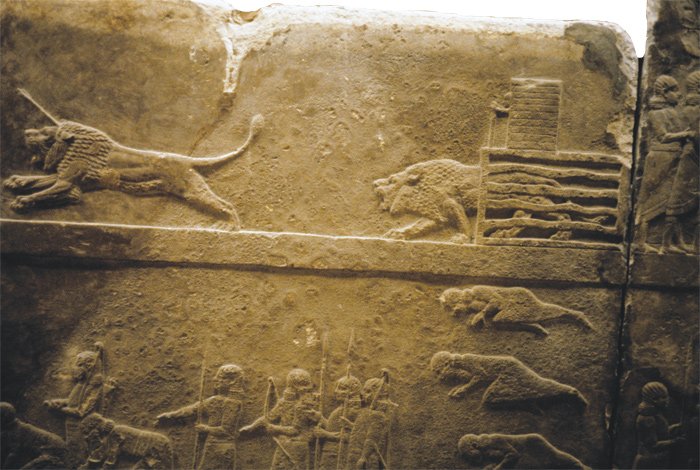 A small boy releases a lion from a cage so that the Assyrian king Ashurbanipal can make his kill.

In 332 B.C., Alexander drove the Persians out of Syria and Palestine, and after conquering Tyre marched into Egypt. He is depicted on temple walls as the pharaoh. After his demise, there followed a series of Greek Ptolemies, which ended with Cleopatra VII. Augustus brought Anthony and Cleopatra’s dreams to an end, and Rome occupied Egypt.

The Egyptians readily accepted the teachings of Christianity, but when Islam came to Egypt, most of the population became Muslims. As the result of the hostility of both Christians and Muslims to idolatry, the great monuments of Egypt fell into ruins and the idols were left strewn on the ground. The glory of ancient Egypt was gone forever. Only the pyramids, temples, and tombs survive for historians and tourists to admire, and remember the intelligence, skill, and artistic ability of a once great people.