by David Down and Dr. John Ashton on January 7, 2010
Featured in Unwrapping the Pharaohs
Share:
Email Using:
Gmail Yahoo! Outlook Other

As far as chronology is concerned, the Third Intermediate Period is the villain of the piece. 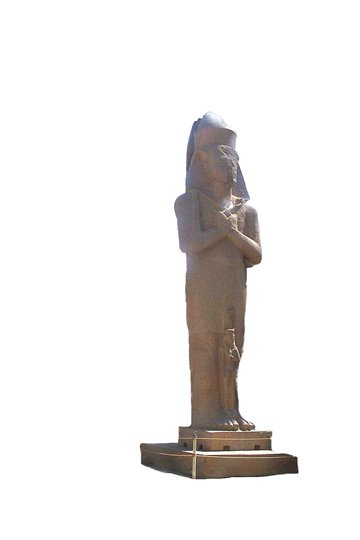 Statue of Rameses II and his daughter Benta Anta in the temple of Karnak. Pinudjem of Dynasty 21 appropriated the statue for himself and chiseled his name on it.

That such a drastic revision is feasible is bluntly stated by Dr. Colin Renfrew of Cambridge University in his foreword to the book by Peter James, Centuries of Darkness. He wrote,

“This disquieting book draws attention, in a penetrating and original way, to a crucial period in world history, and to the very shaky nature of the dating, the whole chronological framework, upon which our current interpretations rest. . . . The revolutionary suggestion is made here that the existing chronologies for that crucial phase in human history are in error by several centuries, and that, in consequence, history will have to be rewritten. . . . I feel that their critical analysis is right, and that a chronological revolution is on its way.”1

James put it bluntly when he said,

“Over the last century chronology has provided the focus of some of the most protracted and troublesome debates in a wide variety of fields, from European prehistory to biblical archaeology. All these can now be seen as the product of a common cause—a misplaced faith in the immutability of the established framework. The resulting Dark Ages and all their ramifications really amount to a gigantic academic blunder.”2

“Prima facie, the theory of Sothic dating may look watertight. Closer examination, however, reveals a web of interlocking assumptions, each of which requires intensive re-examination. . . . There are good reasons for rejecting the whole concept of Sothic dating as it was applied by the earlier Egyptologists.”3

“The case for accepting the astronomical dates for Egyptian history is now so riddled with doubts that the whole structure can be seen to be creaking at the seams.”4

David Rohl, in his book Test of Time, wrote,

“Egyptologists have constructed a dating framework for the Third Intermediate Period which is artificially overextended. . . . More recent research has led to the belief that fundamental mistakes in the currently accepted chronology were made in the formative years of ancient world studies. This book will demonstrate that all is not well with the conventional chronology.”5 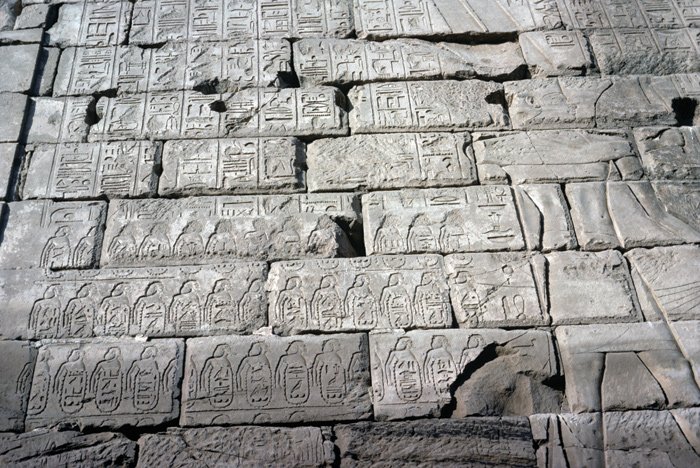 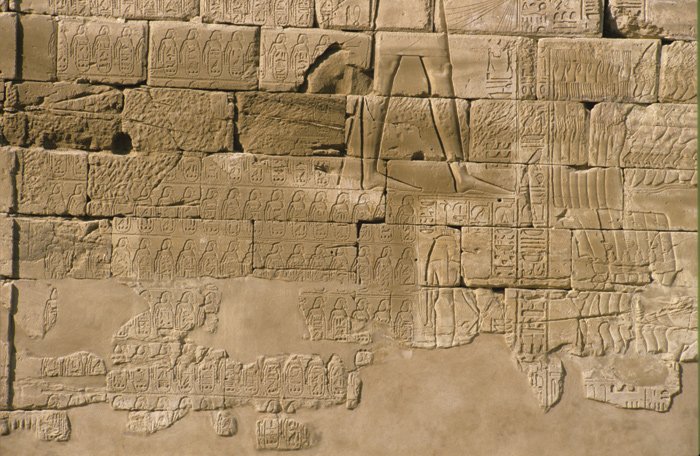 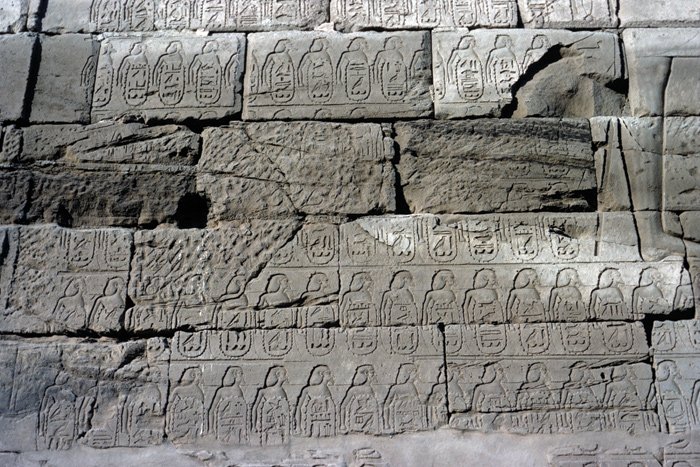 Reliefs on the south temple wall left there by Shoshenq of Dynasty 22. Shoshenq is usually identified with the Shishak of the Bible, who looted the treasures from the temple of Solomon in Jerusalem (1 Kings 14:25). Inside each figure is the name of a city, but Jerusalem is not there. Shoshenq should be allotted a much later date.

Much has been made of the supposed synchronism between Shoshenq, founder of the 22nd Dynasty, and the Shishak of the Bible (1 Kings 14:25). The names were somewhat similar, and although scholars could not be sure of his date, they speculated that it fitted and assigned it to the time of the Shishak of the Bible. However, even if they are contemporary, this may be nothing more than a fortuitous coincidence, but there is also the problem of the names. They might sound approximately the same in English, but they are far apart in the original languages.

“It is therefore impossible to prove that the names are the same, and there remains an equally strong (perhaps stronger) possibility that they are not.”6

He concludes by saying,

“The identification of the two kings is by no means certain, and it cannot be held to stand in the way of the drastic revision of TIP chronology as proposed by Rohl and James. Indeed, to argue that the equation Shoshenq = Shishak proves the correctness of the current chronology would be to indulge in a circular argument, since the chronology has, in its accepted form, been constructed on the basis of the identification.”7

It was Champollion who first read the name “Shoshonq” on the inscription on the south wall of the temple of Karnak and suggested that he was the Shishak of the Bible, but there are serious doubts about the authenticity of Shoshenq’s inscription. Shoshenq does not relate that he invaded Israel or that he conquered Jerusalem. He simply writes a list of cities that he is presenting to the god Amun, and Jerusalem is not among them. Most scholars regard Dynasty 22 as of Libyan origin, but some claim that he was an Assyrian prince. This was during the period when Assyria made incursions into Egypt. 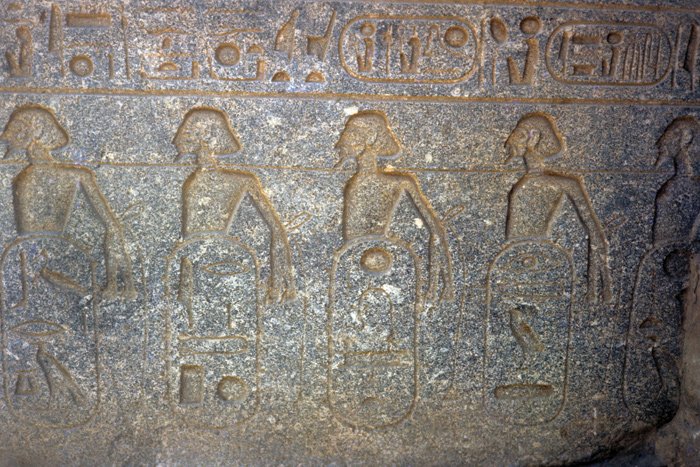 Shoshenq’s relief should not be regarded as historical. The Mittani are included in the list but they had ceased to exist 400 years earlier.

Actually, the list is probably just a copy of another king’s list. James Pritchard, in his book The Ancient Near East, Volume 1, states,

“How unhistorical his large claims were is clear from a statement to the pharaoh by the god Amon: ‘I have subjugated (for) thee the Asiatics of the armies of Mitanni.’ Mittani as a nation had ceased to exist at least four centuries earlier.”8

The TIP is often referred to as “the dark ages” of Egyptian history, simply because we are in the dark as to what really happened. We have far less information from Egyptian sources about this period of time than we do about much earlier periods, and the reason is that they did not exist as separate dynasties. Egypt is a long narrow country spread out along the 621 miles (1,000 km) of the Nile Valley, and there was not always a strong ruler who could unite Upper and Lower Egypt, so there were times when one ruler would be over one part of the country while another ruled elsewhere.

The Armenian translation of Manetho’s dynasties by Eusebius says,

“If the number of years is still in excess, it must be supposed that perhaps several Egyptian dynasties ruled at one and the same time; for they say that the rulers were kings of This, of Memphis, of Ethiopia, and of other places at the same time. It seems, moreover, that different kings held sway in different regions, and that each dynasty was confined to its own nome; thus it was not a succession of kings occupying the throne one after the other, but several kings reigning at the same time in different regions.”9 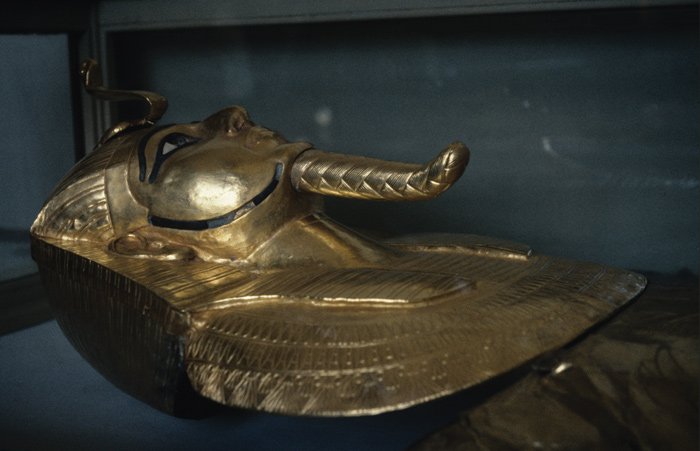 The death mask of Psusennes of Dynasty 21 was found in his tomb at Tanis in the Delta.

These dark ages are not confined to Egypt. As the chronology of neighboring countries is dependent on synchronisms with Egypt, they also have problems. In the archaeological evidence from ancient Greece and the Hittites, there are centuries when it seems no one was living there, but it is not the people who were missing—it was the time period that had been interpolated.

Of course, there have been discoveries related to some of the rulers named in these dynasties. In 1940, at Tanis in the delta, Pierre Montet discovered the burial of Psusennes of Dynasty 21. There were fabulous treasures, including a beautiful golden death mask, but such discoveries say nothing about the status of the dynasty or of its chronological order.

David Rohl highlights the anomaly in the sequence of the dynasties in his book Test of Time. The collection of royal mummies was found in the tomb of Pinudjem II near Hatshepsut’s temple. When Pinudjem was buried during the reign of Siamun, the priests took the opportunity to quietly relocate the royal mummies that were under threat from tomb robbers, and they very thoughtfully labeled the mummies with the names of their owners. 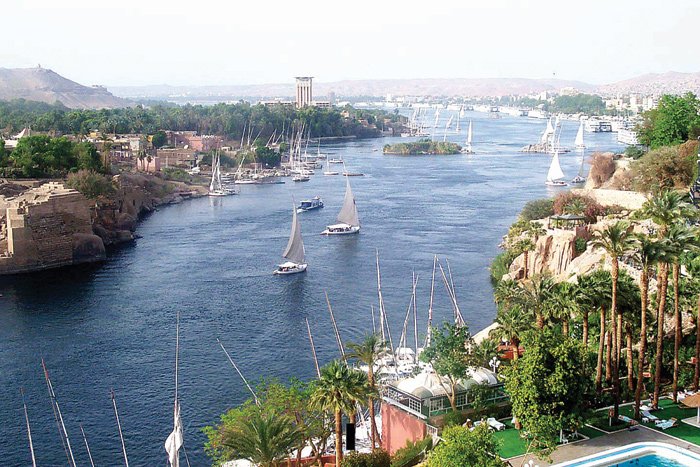 Aswan is a sleepy city sprawling along the west bank of the Nile in the deep south of Egypt. The granite for temples, statues, and obelisks came from the quarry in Aswan.

The conventional date for this burial was 969 B.C., toward the end of Dynasty 21, but the problem for the traditionalists was the discovery by museum staff of writing on one of the bandages wrapped around a royal mummy which disclosed the date of the bandages. It read, “Noble linen which the dual king, Lord of the two lands, Hedjkheperre, son of Re, Lord of appearances, Shoshenk-Meryamun.”10

The implications were obvious. Shoshenk was founder of Dynasty 22, yet here were bandages made to wrap mummies from Dynasty 21. So Dynasty 22 must have come before Dynasty 21. Somebody could not count. It is not good enough to defensively suggest that the tomb was reopened later and the bandages inserted in the time of Shoshenk. The tomb has only a narrow passage blocked by the mummies, and it is unlikely that anyone would have squeezed past the outer mummies to inter the later mummies.

These examples highlight the serious problems with Egyptian chronology for this particular period and illustrate why clues from Assyrian and biblical chronologies are so important.