A New Day Dawns Over Egypt

by David Down and Dr. John Ashton on October 22, 2009
Featured in Unwrapping the Pharaohs
Share:
Email Using:
Gmail Yahoo! Outlook Other

Amenhotep I had no sons to replace him on the throne.

A dynasty is supposed to consist of a line of monarchs from the same family, but Manetho, who first divided Egyptian kings into dynasties, did not seem to know about this, for the next king, Thutmosis I, does not seem to have been related to his predecessors, and it is not known how he obtained the throne. However, that did not seem to bother him, for he went on to become one of the really great pharaohs of Egyptian history. 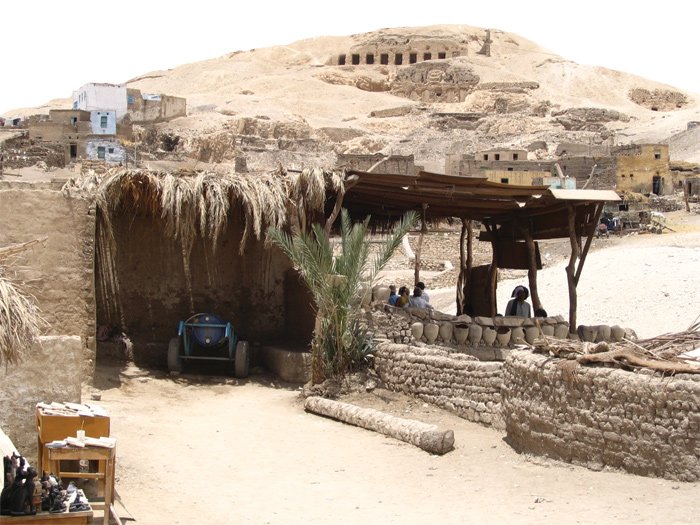 Qurna on the west bank at Luxor is where many tombs were dug and where tomb robbers lived.

He quickly set about expanding the city of Luxor, and his authority was quickly acknowledged, for delegations from foreign countries to the north and south soon arrived to pay him homage. He was highly ambitious and early turned his eyes on foreign conquest, first toward the south where his armies subjugated the Nubians in his first regnal year.

By his second regnal year, he was able to write an inscription on the granite cliffs opposite the Island of Tombos in the third cataract of the Nile, which read,

“He marched to the ends of the earth with his conquering might, seeking one who would fight, but he found no one who would turn his face against him. He pressed on into valleys which the ancestors had not known, and which the wearers of the vulture and the serpent diadems had never seen. . . . Subject to him are the islands of the sea, and the whole earth is under his two feet.”1 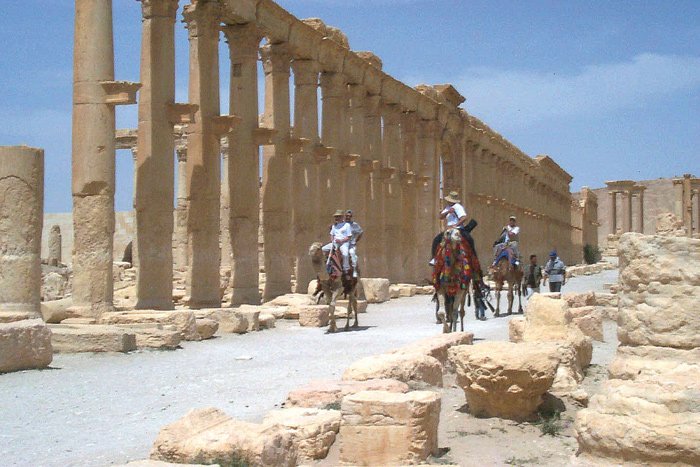 Palmyra, in Solomon’s time called Tadmor in the wilderness, was a vital oasis in the Syrian desert. The Bible record that Solomon built this city can only be credited if Solomon is dated to the affluent Middle Bronze Period.

This was no idle boast, as can be proved from rather a strange observation that his troops made. There was only one river in Egypt, and it flowed from south to north. It is understandable that people living in Egypt would assume that all rivers would flow from south to north, so it was a cause of astonishment for them to reach the River Euphrates and find that this great river flowed from north to south. The fact that they made this observation is convincing evidence that they had really reached northern Syria, and this brings us to an interesting synchronism with biblical history.

By the revised chronology proposed by Velikovsky and Courville,2 Thutmosis I would be contemporary with King Solomon of Israel, and in 1 Kings 3:1 we are told that “Solomon made a treaty with Pharaoh king of Egypt, and married Pharaoh’s daughter.” 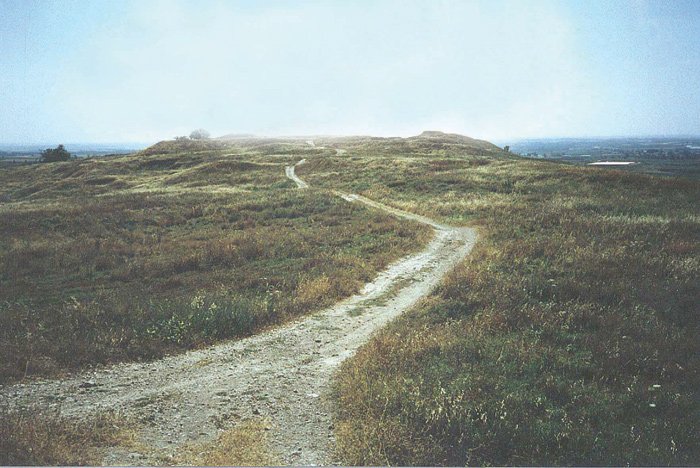 The hill on which Gezer was built. Pharaoh destroyed this city by fire and than presented it to his daughter as a dowry gift for her marriage to Solomon (1 Kings 9:16).

Thutmosis I had two daughters, Princess Nefrubity and Princess Hatshepsut. Hatshepsut is very well known because she later became the sole ruler of Egypt, but because there is no further record in Egyptian historical sources of Princess Nefrubity it is assumed that she died prematurely. However, it is more likely that she was the Egyptian princess who was married to King Solomon.

The Bible presents a picture of opulence during the reign of Solomon. Tons of gold flowed into the king’s coffers, and, “The king made silver as common in Jerusalem as stones” (1 Kings 10:27). His empire extended from Tadmor in the wilderness (1 Kings 9:18) (called Palmyra in Roman times), to Egypt in the south. “So Solomon reigned over all kingdoms from the River [Euphrates] to the land of the Philistines, as far as the border of Egypt. They brought tribute and served Solomon all the days of his life” (1 Kings 4:21). 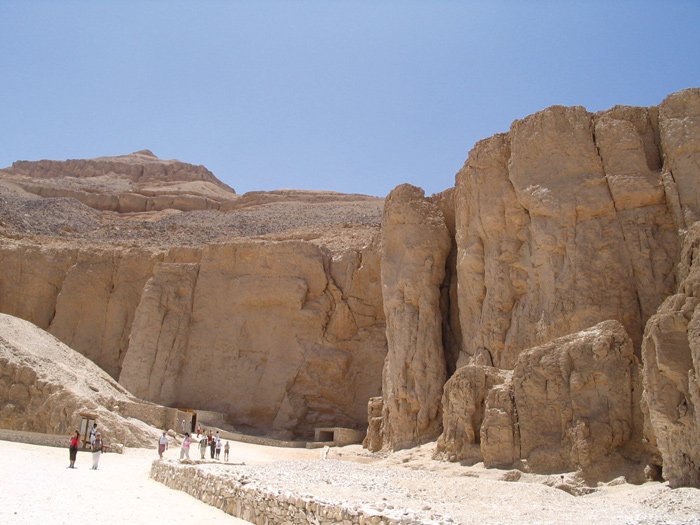 The Valley of the Kings at Luxor where pharaohs from the 18th Dynasty onward cut their tombs into the valley walls.

The majority of archaeologists today scoff at this concept of a powerful and affluent kingdom under Solomon. Some even claim that he did not exist or that he was just a tribal chief. They point to the fact that artifacts found at the end of Iron Age I, which by the traditional dating was the period of David and Solomon, indicate that Israel at that time was an insignificant, poverty-stricken land. The pottery is shoddy, there were no impressive fortifications, and there is no evidence of wealth. By the revised chronology, Solomon would have ruled during the Middle Bronze II Age, and this was a period of affluence and power.

Israel Finklestein, in his book The Archaeology of the Israelite Settlement, wrote, “The entire country flourished in MB IIB.”3 In his book Archaeology of the Land of the Bible, Dr. Amihai Mazar wrote, “The second half of MBII was one of the most prosperous periods in the history of this culture, perhaps even its zenith.” “The fortification systems of MBII reflect a period of great wealth and strong self-government in Syria and Palestine.” “The Middle Bronze Age architecture was to a large extent innovative and original. Together with the massive fortifications of this period, it evidences a thriving, prosperous urban culture. The magnitude of the palaces and temples manifests the wealth and power concentrated in the hands of the autocracy and theocracy of the period.”4 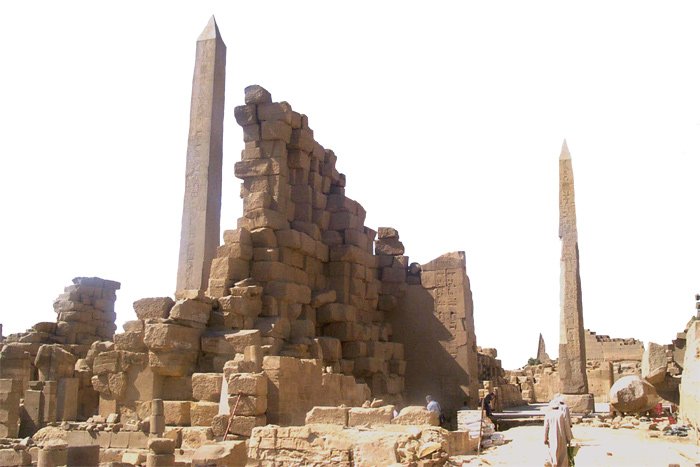 Thutmosis I was the first pharaoh to erect a large obelisk (right) in the Temple of Karnak at Luxor. The taller obelisk on the left was erected by his daughter Hatshepsut.

So, it may well be that the daughter of pharaoh to whom Solomon was married was Nefrubity. This would also be consistent with another very strange piece of history. The unnamed pharaoh who gave his daughter to Solomon bestowed on her a rather unusual dowry gift. “Pharaoh king of Egypt had gone up and taken Gezer and burned it with fire, had killed the Canaanites who dwelt in the city, and had given it as a dowry to his daughter, Solomon’s wife” (1 Kings 9:16).

There is no mention in Egyptian records of Thutmosis I invading the hill country of Israel. Why would he if his daughter was to be married to Solomon? Gezer is down on the Plain of Sharon and was right in his path of advance into Syria. Solomon had not been able to bring this well-defended city to heel, but Pharaoh’s army made short work of the Canaanites and handed over their burnt-out city to Solomon who was no doubt well pleased with the gift. 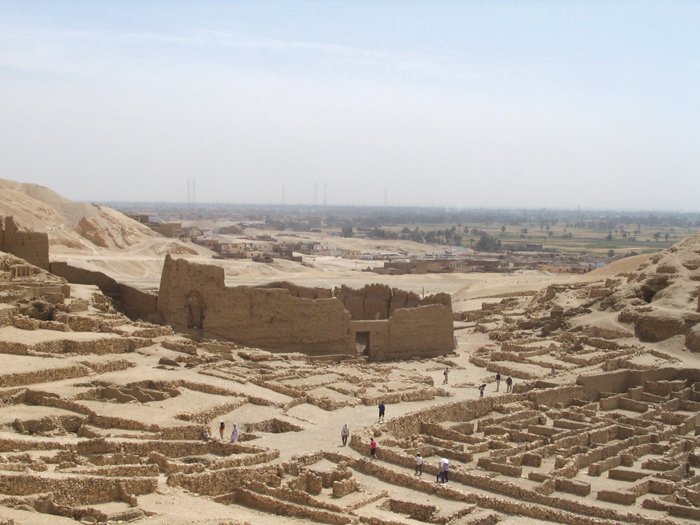 The pharaohs of Dynasty 18 and onward built and maintained an elaborate village at Deir el Medina on the west bank of the Nile at Luxor for the families involved in making their tombs in the Valley of the Kings.

Gezer has been thoroughly excavated by archaeologists over the years. A deep shaft has been cut through the center of the tell and it has exposed a thick layer of black ash where the city was thoroughly burned by fire. Beneath this ash is pottery belonging to the Canaanite period. Above it is pottery of the Middle Bronze Period, which by the revised chronology, would be from the time of Solomon.

Back home, Thutmosis continued with his building program. He started a fashion in the Temple of Karnak by erecting two granite obelisks there. One of them is still standing there today. It is 64 feet (19.5 m) high and weighs some 143 tons. The other lies in pieces nearby. Originally, they were plated with electrum, a mixture of gold and silver, and must have presented a glittering appearance. 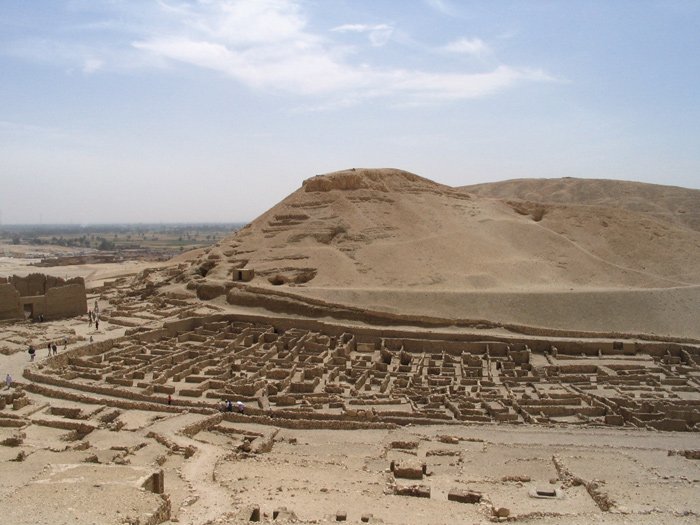 Well laid-out streets provided access to the neat houses provided for the masons and artists who worked on the tombs of the pharaohs in the nearby Valley of the Kings.

The information we have of these obelisks and how they were erected comes from the tomb of Aneni, an official of the king who had his tomb number 81 in the necropolis on the west bank of the Nile at Luxor. He says, “I saw to the erection of two great obelisks . . . having built an august boat 120 cubits in length and 40 cubits in width in order to transport these obelisks; they arrived safe and sound, and landed at Karnak.”5

It all sounds very easy, but scholars still marvel at the skill that must have been involved in cutting hard granite obelisks out of the quarry at Aswan, levering these huge weights onto a barge, and then floating them nearly 124 miles (200 km) down the Nile to Luxor, and erecting them in their final location.

The reign of Thutmosis I was glorious but short. Dennis Forbes recently expressed his view that it lasted not much more than six years, so it was just as well he gave early attention to his burial place. He had his tomb cut in what is now known as the Valley of the Kings where the pharaohs depended on secrecy to conceal their tombs, and thus preserve their mummies and the treasures that accompanied them into the afterlife. 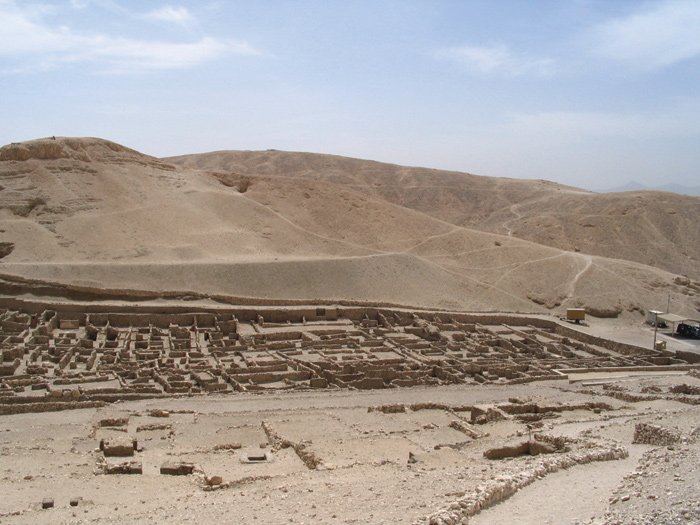 The south end of Deir el Medina. Graffiti found in Deir el Medina provides an insight into the lives and work of the skilled artisans who created the magnificent tombs for the pharaohs in the Valley of the Kings.

Thutmosis I was the first king to build a special village for the workmen who cut and decorated the tombs there. These masons and artists who lived in Deir el Medina were highly skilled and trusted. The pharaohs saw to it that they were well cared for. It was, of course, impossible to conceal what they were doing, but to the best of their ability they went about their work. The chief architect of this early tomb was proud of the confidence placed in him and wrote, “I supervised the excavation of the cliff-tomb of his majesty alone, no one seeing and no one hearing.”6

It did not work. Of the 60 or more tombs cut there for the pharaohs, only one survived with all its treasures intact, the tomb of Tutankhamen. We cannot even be sure that the mummy of Thutmosis I to which his name is attached is really his, but his successors believed that at least his ba had gone to the right place. They wrote that he “went forth to heaven having completed his years in gladness of heart.”