by David Down and Dr. John Ashton on September 3, 2009
Featured in Unwrapping the Pharaohs
Share:
Email Using:
Gmail Yahoo! Outlook Other

In the Cairo Museum is a beautiful, larger-than-life-size granite head of Userkaf, first king of the 5th Dynasty.

He was the son of Neferhetepes, a daughter of the 4th Dynasty King Djedefre. Most of the kings of Egypt seemed to take life very seriously, but there is just the trace of a smile around the lips of Userkaf. It could have been the sculptor’s idea, but maybe Userkaf was a friendly fellow. 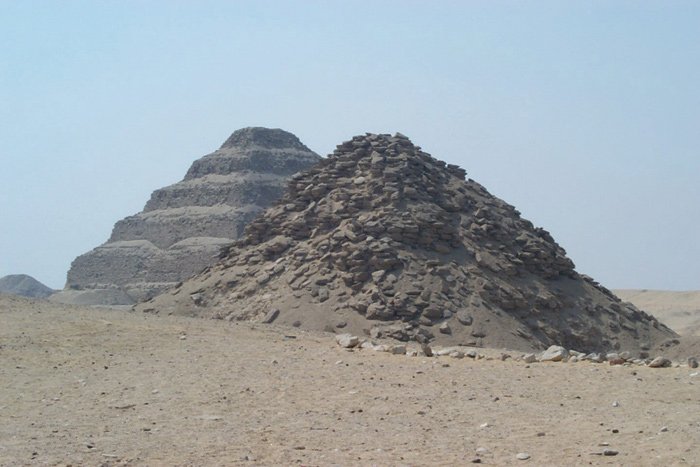 Userkaf built his pyramid just outside the east wall of the Step Pyramid of Saqqara. The outer casing stones were stolen long ago, leaving an untidy heap of stones and rubble.

He chose to build his pyramid just outside the east wall surrounding the Step Pyramid, but it was a shoddy affair. Instead of layers of cut stone, the core consisted of a jumbled heap of stones piled up in the shape of a pyramid and then faced with limestone blocks. It looked all right from the outside; however, after the facing stones had been pilfered, only an untidy pile of stones remained.

His pyramid was only 240 feet x 240 feet (73 x 73 m) in area, and 161 feet (49 m) high, and beside it was his mortuary temple. A few blocks of stone strewn around is all that remains of this structure, but it originally must have had some exquisite pictures in relief, some of which have been found. It was here also that the granite head of Userkaf was discovered. He seems to have ruled for fewer than ten years. 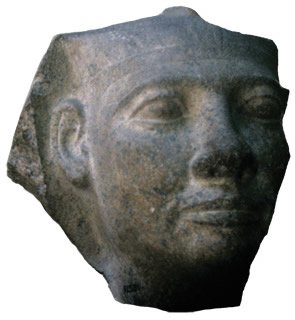 The large stone head of Userkaf was found in the mortuary temple attached to his pyramid. There are traces of a smile on his lips.

The subsequent kings of Dynasty 5 built their four pyramids at Abusir, in between Giza and Saqqara. They also were untidy affairs that have not survived in good condition, but an interesting feature of these pyramids was the erection of sun temples associated with them, and some important written documents have been found at Abusir.

Userkaf was succeeded by Sahure. His mother is believed to have been Khentkaus I, who, in her tomb at Giza, is said to have been the “mother of two kings.” His father probably was Userkaf. Sahure’s pyramid was 256 feet (78 m) square and 154 feet (47 m) high, and from the pyramid a stone causeway goes down to his Valley Temple. A team from Czechoslovakia has been excavating there, and in 1996 found that there were some interesting construction scenes depicted on the face of the stones which lined the causeway. There is no certainty as to how the millions of huge stones in Khufu’s pyramid were elevated to their positions, and the construction scenes depicted do not necessarily apply to the building of the larger Khufu’s pyramid. However, since the 5th Dynasty followed the 4th in which the really big pyramids were built, it is likely that the same construction methods were used. 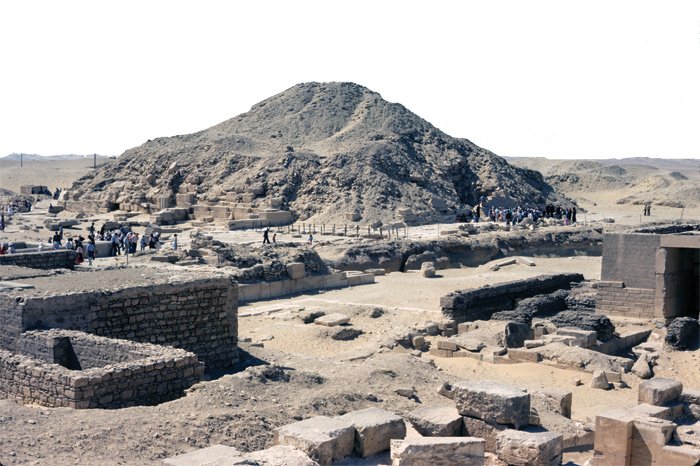 The pyramid of Unas, last king of Dynasty 5, is now just a pile of rubble, but inside is some beautiful hieroglyphic writing in vertical columns.

One of the stones that has been recovered names four work gangs that were involved in the building. One of the gangs is actually portrayed pulling the ropes by which the huge blocks were moved. Another stone shows the fitting of the pyramidion (top pyramid shaped block) to the apex of the pyramid. Another block shows women dancing at the time of the fitting. The accomplishment was certainly something to dance about. All this still leaves a lot of unanswered questions, but any clues on the mystery of pyramid building have to be cherished.

In 1982, the Czechs found 2,000 pieces of papyrus, written in hieratic, of Pharaoh Raneferef in his mud brick mortuary temple. Papyri were also found in the pyramid of Queen Kentkhawes. They told of six sun temples in the vicinity, but only two have been found. Over the last 30 years, a team of skilled archaeologists from Czechoslovakia has been methodically and patiently working on the site and recently made some spectacular discoveries. 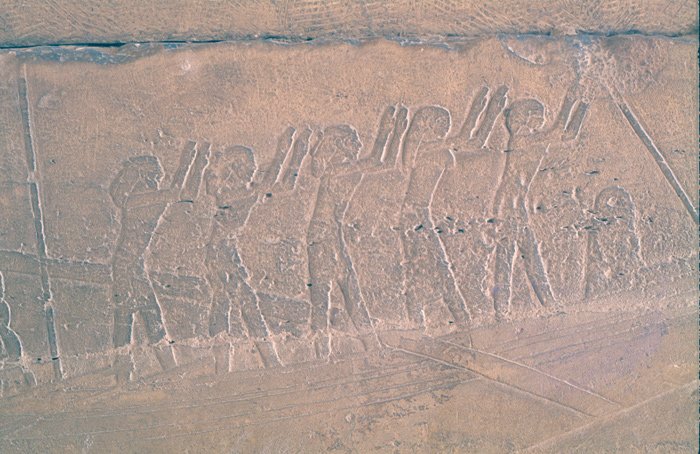 On the inside of the walls of the causeway leading from the valley to the pyramid of Unas are reliefs of mourners lamenting the passing of their kings.

Naturally, most of the team members came from Czechoslovakia, but for the last 16 years, Dr. Gae Callender of Sydney University has played a prominent role in these excavations. One area the team excavated was the funerary temple of the king’s vizier, who apparently had some aspirations to royalty. One of the walls was mysteriously curved, and the archaeologists concluded that it had been made like that to accommodate the shape of a funeral boat, an object usually reserved for the king.

There was also the cemetery of the royal princesses. Mummification sure does nothing for the beautiful looks of a princess, but then beauty was not the objective of mummification. Primarily, it was to preserve the body so the deceased could enjoy the benefits of the afterlife. 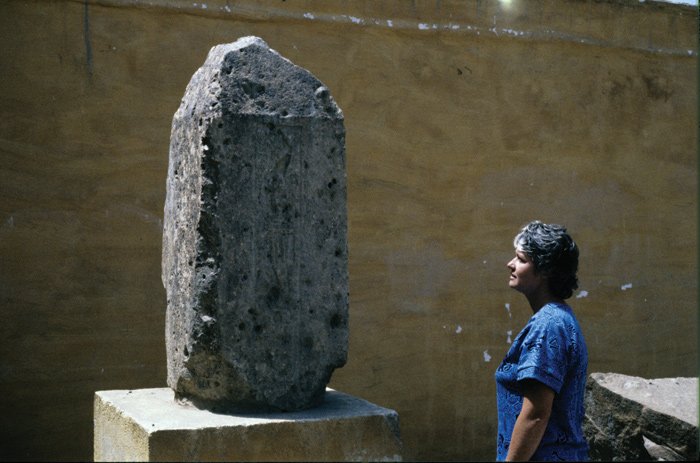 A small obelisk, one meter high, now in the open-air museum at Heliopolis, was the beginning of obelisks in Egypt.

One unique find made at this site was a pyramidion; the pointed capstone usually fitted to the top of a pyramid when it was completed. Only three other such capstones have ever been found. This one was made of black stone, but there was no trace of electrum gilding on this particular capstone. Electrum is a naturally occuring alloy mostly of gold and silver, with traces of other metals. Another interesting find was a relief from King Sahure’s causeway, showing army officers training their soldiers for war.

Other reliefs were found depicting men with protruding ribs and emaciated bodies. Similar reliefs were found on the walls of the causeway of Unas, last king of the 5th Dynasty, whose tumbled-down pyramid is at Saqqara. Scholars have interpreted these reliefs to mean that there was a severe famine in the land. Recent scholarship refutes this interpretation. Dr. Callender claims that these were workmen who labored in the gold mines which had narrow tunnels to work in.1 Naturally, thin men would be chosen for these jobs. She claimed that the Unas reliefs were merely copies of these earlier reliefs, for the squared lines for copying appeared on the Sahure reliefs. 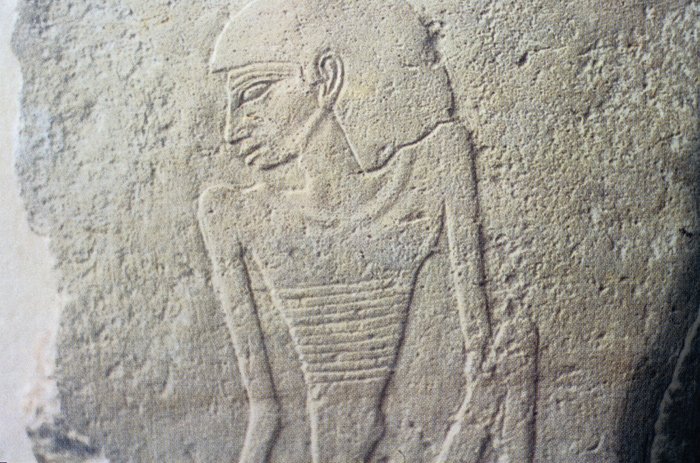 Inside the wall of Unas’s causeway are depicted some emaciated figures, possibly the result of a famine in his days.

No doubt, the most exciting find that resulted from the excavations at Abusir was the discovery of the tomb shaft of Iufaa. A smaller shaft led to an intact tomb situated beneath the main shaft. The entire tomb was covered with religious spells and hymns and decorated with fine vignettes of religious scenes. Eighty-two feet (25 m) down at the bottom of the shaft, the Czechs found furniture, food, and models, including an astonishing 408 ushabtis (small images of laborers working in the harvest fields) intended to work for their master in the afterlife.

In the burial shaft was the sarcophagus of Iufaa, a later Egyptian priest and palace administrator. His name literally means, “he is great”—perhaps great in size or meaning he would be destined for greatness. His tomb faces east instead of the conventional west, and his huge sarcophagus weighed some 50 tons, with the lid alone weighing 22 tons. As Iufaa probably died during the 27th Dynasty, they concluded that this may have reflected Persian influence. 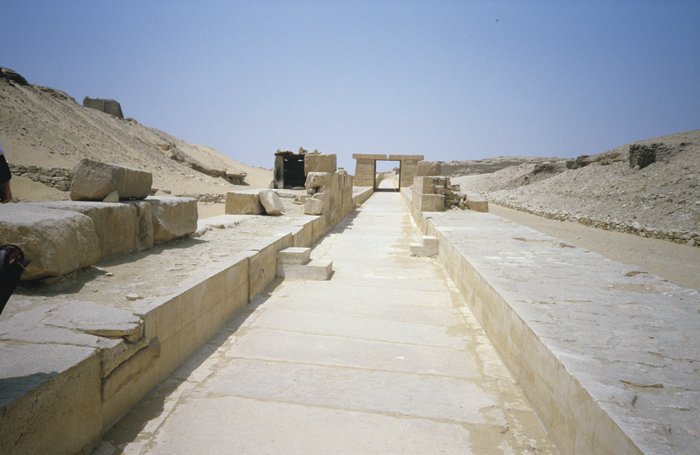 The causeway along which Unas’s body was brought to his pyramid extends from the valley to the pyramid.

Iufaa’s wooden coffin was in very fragile condition and tended to crumble at a touch, but it was carefully lifted from the tomb shaft with the intention of placing it on a jeep to take it to its destination for further study, but the locals would have none of it. They proudly claimed that Iufaa was one of their noble ancestors, and they would carry his coffin on their shoulders all the way to the place where a more fitting vehicle (a panel van!) was waiting.

The last king of the 5th Dynasty was Unas, who built his pyramid just south of the wall surrounding the step pyramid. Most of the facing stones from his pyramid have been removed, but there is one area on the south side of his pyramid which has an inscription inscribed there during the 19th Dynasty by Khaemwaset, who was a son of Rameses II. Khaemwaset would have to be classified as the world’s first archaeologist. He went around the country excavating and restoring monuments from earlier kings, and he tells of his activities in this inscription. 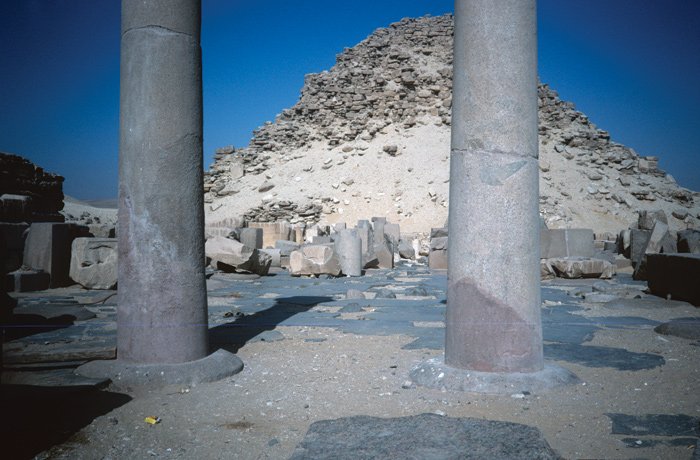 Pillars of the temple attached to the pyramid of Sahure.

Perhaps the most important feature of the pyramid of Unas is the writing that is found on the walls of his tomb chamber and passages. He was the first pharaoh to introduce writing into his pyramid. The texts are in vertical columns of hieroglyphs and contain passages from The Book of the Dead, pronouncing curses on anyone who disturbs his tomb. Blue stars adorn the roof of his burial chamber, presumably to give the dead king the impression that he was under the night sky. 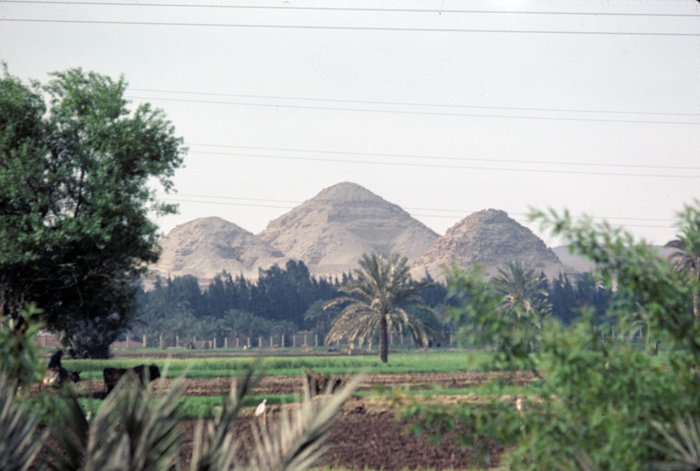 Three pyramids of Dynasty 5 at Abusir between Giza and Saqqara.

From the east side of his pyramid, a causeway runs down to the Nile Valley. It is still paved with limestone blocks, and the lower portions of the walls are still in position. Originally, slabs of stone rested on the walls to make a roof. As it was necessary to admit light to this causeway, single slabs of stone could not be placed to span the gap between the walls, so two slabs of stone were used. They balanced on the stone walls, one half protruding beyond the side, and the other half over the causeway, not quite meeting in the center so light could be admitted.

Originally,the whole causeway was thus encased, but only a small sector is still standing. On the walls were reliefs showing women mourning over the dead king whose body would have been floated from the Nile to the bottom of the causeway, and then carried up the causeway to his tomb in the pyramid.