by David Down and Dr. John Ashton on November 26, 2009
Featured in Unwrapping the Pharaohs
Share:
Email Using:
Gmail Yahoo! Outlook Other

According to one dreamer, Amenhotep III got off to a good start. He was of divine origin.

His mother, Mutemwia, was impregnated by the god Amen. “There he found her as she slept in the innermost part of her palace. His divine fragrance awoke her. Amen went to her immediately, he lusted after her. When he had appeared before her he allowed her to see him in the form of a god. The sight of his beauty made her rejoice. Amen’s love entered her body, and the place was filled with the fragrance of a god, as sweet as the scents from Punt.” 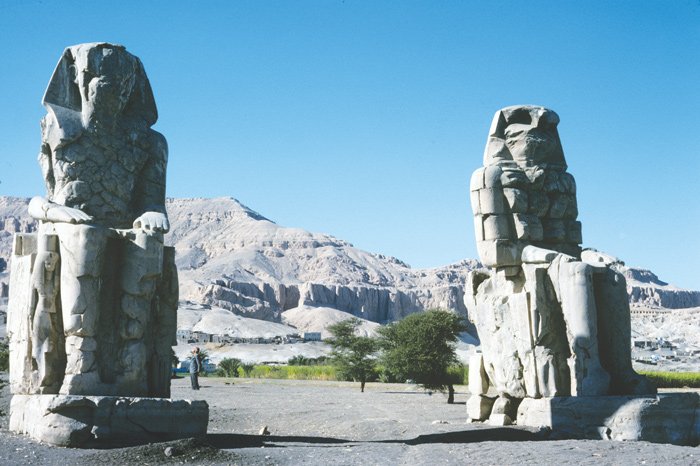 The Colossi of Memnon which stood at the entrance to the temple and palace complex of Amenhotep III at Luxor. They have survived the centuries because they were made of individual stones which were of little value to subsequent builders.

He certainly needed all the help he could get, because his father, Thutmosis IV, died while he was quite young. Amenhotep must have been only about 10 to 12 years of age when he mounted the throne. His mother acted as regent for the first 6 years of his reign, which lasted for 38 years. Prosperity attended his reign and he quickly learned how to spend the tribute that continued to flow into the Egyptian treasury. He had hundreds of statues carved, built the largest palace complex Egypt had known, and erected huge pillars on the site of the Luxor temple. Some writers have dubbed him “Amenhotep the Magnificent.”

For the first 20 years of his reign, Amenhotep resided at Memphis in the north, but he lavished his wealth on buildings at Luxor. His most conspicuous monument was his temple and palace complex on the west bank of the Nile at Luxor. At the entrance stood two huge statues of himself and his family. Soon after his death his successors helped themselves to the plentiful stones that were used in his buildings and today all that remain standing are the statues at the gate, now known as the Colossi of Memnon. Each one stands 59 feet (18 m) high and weighs about 700 tons. 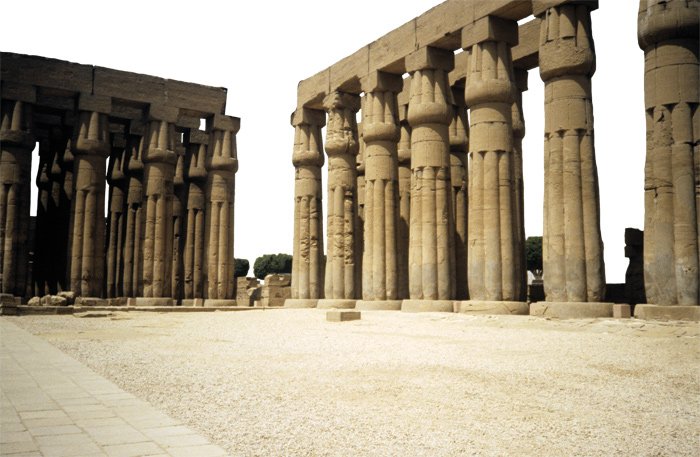 Lofty pillars surround the courtyard of Amenhotep III at Luxor. Because these pillars were disintegrating they were dismantled in 1994 and their foundations were waterproofed to prevent destructive minerals being sucked up into the pillars.

The reason that the gate statues survived was that they were not made of single stones that could have been reshaped and used elsewhere, but of layers of stones that could not be easily reused. At the rear end of this complex there is a huge stela, and the distance between the gate and the stela is 1,312 feet (400 m). His inscription on the stela (translated by Flinders Petrie) tells of his satisfaction with his edifice:

Behold, the heart of His Majesty was satisfied with making a very great monument; never has happened the like since the beginning. He made it as his monument for his father Amun—an august temple . . . an eternal, everlasting fortress of fine white sandstone, wrought with gold throughout; its floor is adorned with silver, all its portals with electrum; it is made very wide and large, and established for ever. 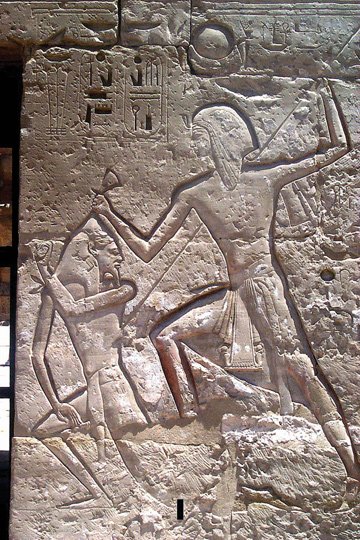 Though his was a peaceful 38-year reign, Amenhotep is depicted on the Colossi as smiting his enemies.

In 1989, the sharp-eyed guardians of Egypt’s antiquities noticed that the Colossi were starting to lean. Fearing that they might have a “Leaning Tower of Pisa” on their hands, or even worse, that the statues might collapse, the authorities commissioned Rainer Stadelmann, director of the German Institute of Archaeology, to survey the Colossi. He was able to show that the statues are in no immediate danger.

However, as well as the photogrammatic survey, the diligent professor also examined the foundations upon which the statues were built. These had been uncovered back in 1832, but since then a further 10 feet (3 m) of Nile mud had accumulated. Once this was cleared away, Stadelmann discovered, to his surprise, that the statues stood on a foundation of sand! In fact, the whole temple appears to have been built on sand. 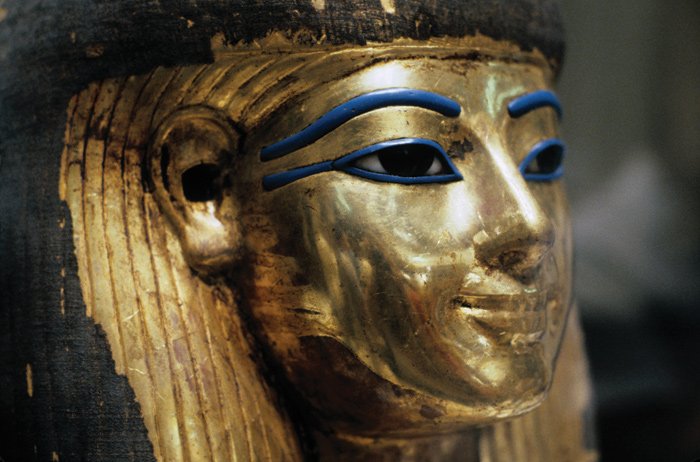 Dazzling golden death-masks of Yuya and Tuya, the commoner parents of Amenhotep’s wife, Tiye, were found in their tomb.

It had been thought that the destruction of the temple may have been brought about by an earthquake, but it is now thought that the annual flooding of the Nile may have been the cause, washing away the sand and causing walls and pylons to buckle and collapse. While subsequent pharaohs may have balked at robbing a functional temple, none of them saw any problem with taking stone away from a ruin, which may explain why so little remains of this temple, when so much is still standing at Medinet Habu or the Ramesseum.

Having made one unexpected discovery, Stadelmann continued his work and recovered a number of broken statues as well as the stone foundations of the pylons and walls of the temple. His workmen, however, were hindered by a thick growth of halfa grass, a nasty weed which is exceptionally fast-spreading. Someone set fire to the grass, probably in an attempt to clear it away and help the work of excavation. Unfortunately, the grass burned so fiercely that the fire actually caused some of the inscribed stonework to split. 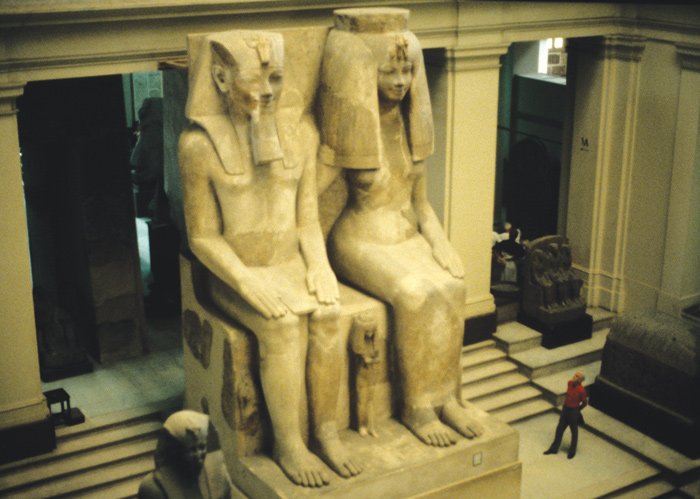 The statue of Amenhotep III and his favorite wife, Tiye is the largest statue in the Cairo Museum. Tiye is depicted as equal in height to the pharaoh. Rameses had his queen cut down to knee-high.

It was here that the largest statue now in the Cairo Museum was found. It had been smashed to pieces and not all the pieces were found, so archaeologists had to replace the missing parts. In doing so, they gave rise to an interesting argument. Gaston Maspero assembled the pieces and placed Queen Tiye’s arm around her husband’s waist, but recent scholarship has concluded that the arm should be resting on his knee.

Amenhotep never tired of having statues of himself made. More than one thousand have survived and are in museums around the world. Tiye was his favorite wife, and more statues of her have survived than of any other Egyptian queen except Nefertiti. Going by her wooden statue now in the Berlin Museum she was not exactly beautiful, and seemed to have Nubian features. 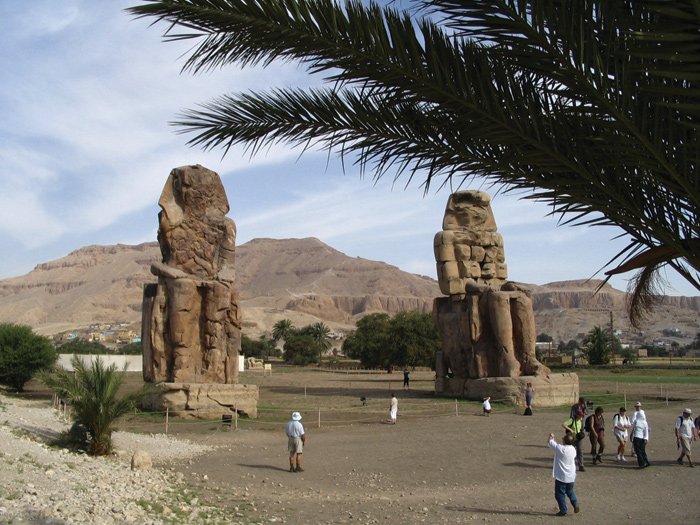 The so-called Colossi of Memnon still stand at the entrance of the vast temple and palace complex of Amenhotep III at Luxor. This complex extended 1,320 feet (400 m) to the rear of the statues.

Tiye’s parents were Yuya and Tuya, and their tomb was found intact with dazzling golden face masks and a gilded chariot. They had been given a royal burial though they are known to have been commoners. Amenhotep’s mother-in-law, Tuya, was the mistress of his harem, and his daughter Sitamen became his great royal wife. Critics have scoffed at the biblical record that Solomon had 700 wives and 300 concubines (1 Kings 11:3), but Amenhotep is known to have accumulated more than a thousand wives in his harem. No wonder that the last known statue of him shows him as rather old and exhausted.

If his mummy has been correctly identified, he may have died of blood poisoning, because his mummy reveals his teeth as being very prominent, and the doctors say that his gum abscesses probably caused his death.