Akhenaten’s brother Smenkhare is generally thought to have followed Akhenaten on the throne, but some have suggested that Smenkhare was actually Nefertiti.

In any case, his reign, if any, was very brief, and the next monarch was the boy-king Tutankhaten, presumably a son of Akhenaten by his secondary wife Kiya.

He was only about nine years old when he was crowned king, and he was hardly in a position to make his own decisions. There were men at court who, of political necessity, had subscribed to the religion of Aten, but who were not at heart converted. They would have put pressure on the boy king to revert to the worship of Amun, and, in his third year, he changed his name to Tutankhamen which meant “beautiful in life is Amun,” and soon after the whole court reverted to Luxor. Akhetaten was abandoned and soon fell into ruins.

The record of the change is on a stela in the Cairo Museum. It was lucky to survive, as someone later had chiseled holes in it with a view to breaking it in half and using it for some other purpose.

Tutankhamen was married to Akhenaten’s surviving daughter (who was also his wife) Ankhesenpaten. She was about four years older than Tutankhamen, and she changed her name to Ankhesenamun, which means “she lives for Amun” instead of “she lives for Aten.” She bore him two stillborn children. 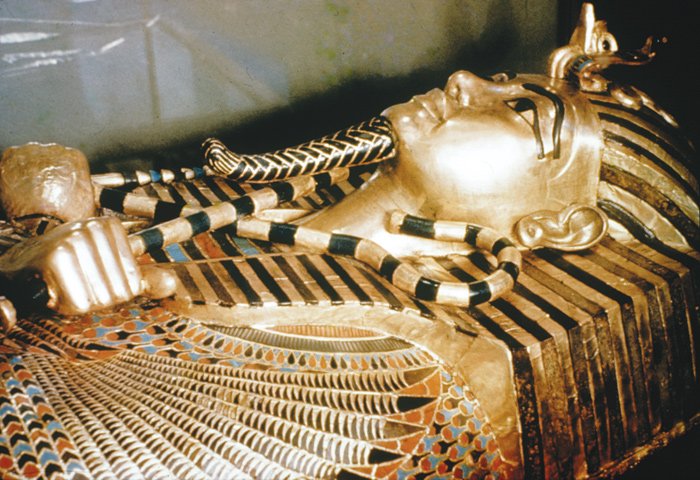 Tutankhamen was interred in a coffin inside two outer wooden coffins gilded with gold leaf. The inner coffin was made of solid gold weighing some 242 pounds (110 kg). 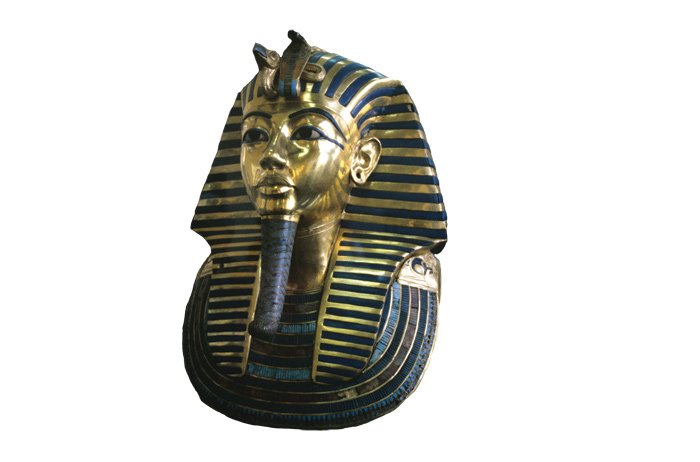 Outside Tutankhamen’s gold coffin was his exquisite death mask encasing his head.

Much has been written about the death and tomb of Tutankhamen, but not much has been written about his life, though much was accomplished during his lifetime. There is a delicate statue in the Louvre of him standing under the protection of the god Amun, and there is a huge statue of him in the Chicago Museum. During his lifetime, an avenue of sphinxes was made to link the temple of Karnak with the vast temple of Mut. There are no inscriptional records of him waging any wars. On the side of his clothes chest, he is depicted fighting against Nubians, but this may only be a traditional activity for a pharaoh. More realistic is the picture of him out hunting with his dog by his side. 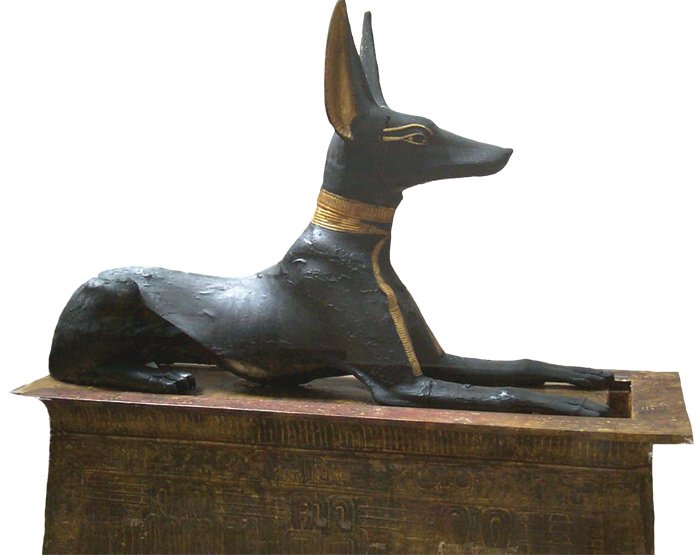 In Tutankhamen’s tomb was a statue of Anubis, jackal god of the necropolis.

There are few specific records of Tutankhamen’s activities, and nothing giving the chronology of his reign. It is from his skeleton that medical authorities have been able to ascertain that he was only about 19 when he died, from which we can conclude that he only reigned for about ten years. There is not any certainty about the cause of his death.

Earlier x-rays of his mummy suggested that he had a blood contusion behind his ear which may have been responsible for his death, but scans conducted in 2005 revealed that the damage to his head was most likely caused by the embalmer after Tutankhamen’s death. Dr. Zahi Hawass, who supervised the scans, concluded that death may have been caused by an infection which resulted from some damage to his leg which the scan revealed. 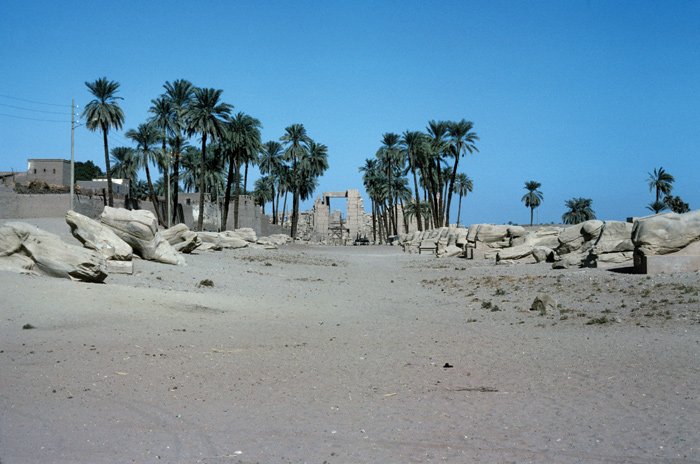 Tutankhamen was given a lavish burial in the Valley of the Kings. The fruit and flowers that were found in the tomb indicate that he must have been buried in March or April.

Care was taken to conceal the tombs of the pharaohs in the Valley of the Kings, but the relentless tomb robbers soon found their way in, and not only plundered the treasures, but mutilated the mummies to retrieve the jewelry that was customarily wound in among the bandages that were wrapped around the body. Tutankhamen escaped these indignities because the workmen cutting into the cliff face to make the tomb of Rameses VI in the 20th Dynasty selected a site just above Tutankhamen’s tomb and dumped all the stone chips from the tomb of Rameses VI onto Tutankhamen’s tomb, effectively burying it out of sight. It was this factor that preserved his tomb intact until it was found by Howard Carter in 1922. 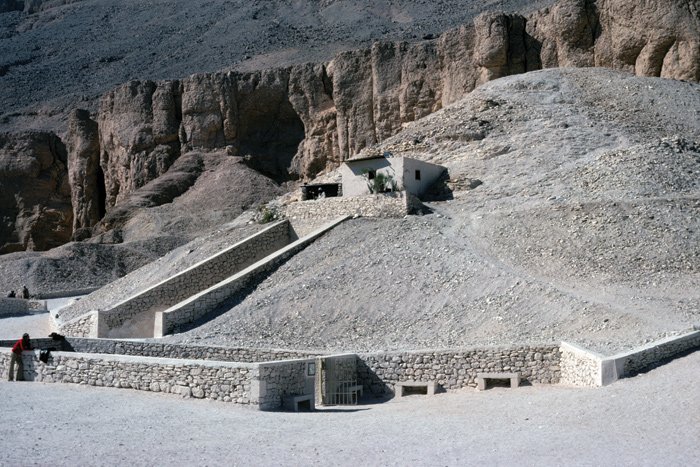 Rameses VI cut his tomb above the tomb of Tutankhamen. All the stone chips from Rameses’ tomb were dumped on Tutankhamen’s tomb effectively burying it until its discovery by Howard Carter in 1922.

Carter had no formal university education. He went to Egypt primarily because of his artistic ability. In the days before sophisticated photography, there was need of accurate drawings to preserve information about tombs and temples that were being excavated. Carter had the good fortune to be invited to work with the famous archaeologist Sir Flinders Petrie from 1890 to 1908.

Theodore Davis and others had found most of the tombs in the Valley of the Kings, and most of the known pharaohs had been accounted for. Carter knew, however, that there was one pharaoh whose tomb had not been discovered—Tutankhamen. So, when Davis announced that there were no more tombs to be found and relinquished his permit to excavate, Carter applied for the permit. He had a hunch that the tomb existed, and he wanted to find it. He did not dream at that stage that the tomb might be intact. 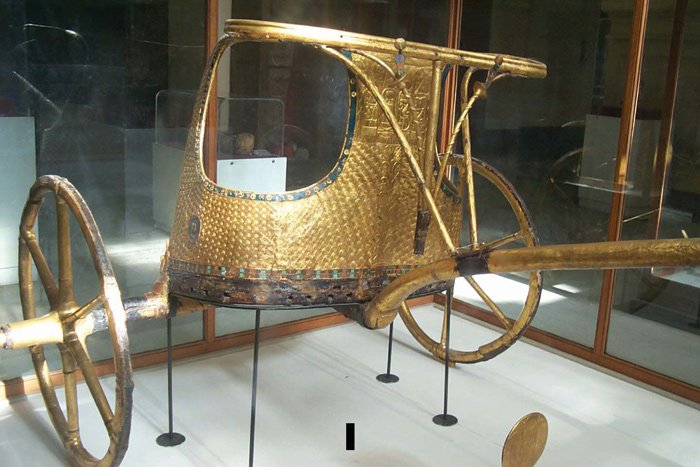 One of the gilded chariots found in Tutankhamen’s tomb. It was dismantled when found, as it was too bulky to transport intact down the narrow passage to the tomb.

Carter was sponsered financially by Lord Carnarvon. Carnarvon was in poor health, and his doctors advised him to seek a dry climate. There was nothing drier than Egypt, so Carnarvon chose to spend time there. When the First World War ended in 1918, Carter commenced his search for Tutankhamen’s tomb. Carter’s search seemed doomed to failure, and in 1921 Carnarvon had had enough. Carter pleaded for just one more season, a plea that was to make history, for it was in that year that Carter stumbled onto the tomb. Its discovery has been written about often enough, but there are some features of the sensational story that may be new to some readers.

Lord Carnarvon had sunk a lot of money into the search, and it was only right that he should be reimbursed if a tomb was found. Those were days of political instability in Egypt, and Carnarvon was apprehensive that he would not be suitably rewarded for any possible find, and sure enough, in 1923 the pro-British government was voted out and a radical government took its place, vowing to keep Egypt’s antiquities in Egypt. So, when the discovery was made, Carnarvon entered into a contract with the Times of London to give them exclusive rights to any story. They were to pay him five thousand pounds and 75 percent of the profits. 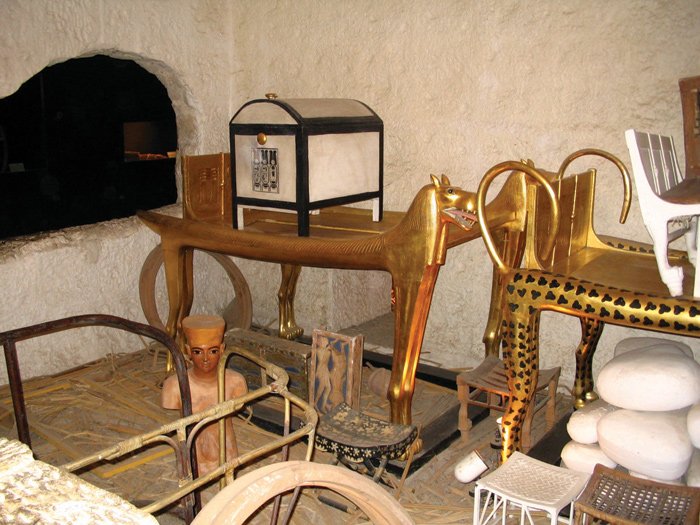 Some fabulous treasures were found in Tutankhamen’s tomb.

Naturally, this raised the ire of other reporters who had come from all over the world to cover the event. Egyptian reporters were particularly incensed that all the news they could file with their papers came from what they had read in the Times of London. So the reporters had to make an inflated story out of any scraps of information they could glean. One ingenious reporter dreamed up the idea of the curse of the pharaohs. Carnarvon had died “mysteriously” three months after the tomb was opened, and he dug up other incidents that seemed to indicate that the curse of the pharaohs was claiming its victims.

Carnarvon’s death was no big deal. He was a sick man and actually died of an infection resulting from nicking himself with his razor, and if anyone should have been struck dead, it should have been Carter, but he lived to a ripe old age. No archaeologists would subscribe to the idea of a curse. 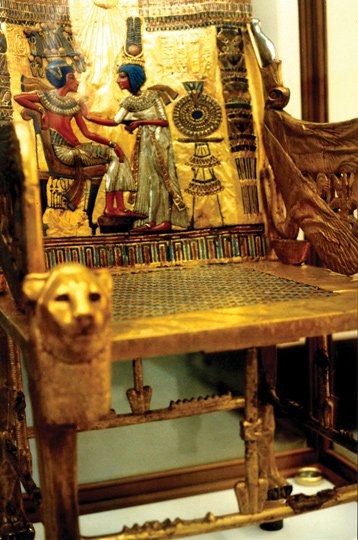 On the back of Tutankhamen’s throne, his wife, Ankhesenamen, is pictured anointing him with perfume.

Carter was a brilliant archaeologist and was ahead of his time in archaeological procedures, but naturally he was not up to the sophisticated methods used today. His main objective was the retrieval and preservation of artifacts, and to that end he purchased one mile of wadding and two miles of bandages to protect his finds. He meticulously noted the exact location of every item he found, and applied the latest methods of preserving them. With painstaking methods, it took him ten months just to expose the mummy, and ten years to remove every object from the tomb.

In those days, mummies were plentiful, and DNA testing had not been invented, nor was there any interest in the composition of bones, or pharaonic lifestyles. So when Carter needed to retrieve the priceless bangles on Tutankhamen’s arms, he wrenched the arms from their sockets to enable him to remove the bangles. Likewise, the necklaces were removed by detaching the mummy’s head. The mummy was stuck to the bottom of the coffin by the melted resins, and the only way Carter knew of releasing the mummy was to place the coffin in the fierce sun of the valley to melt the resin. 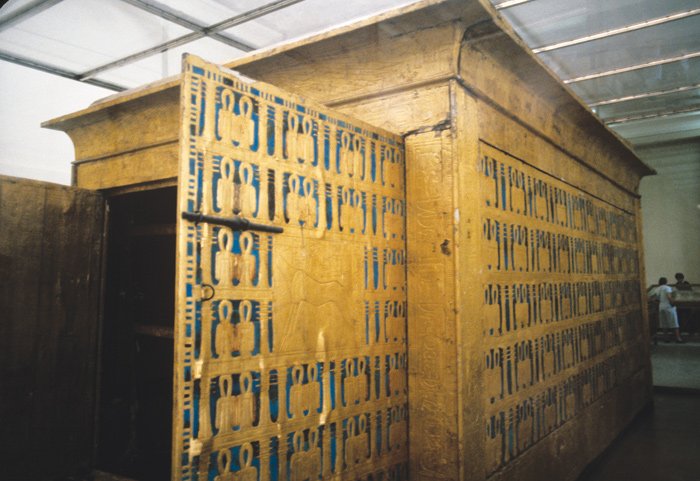 Four large gilded boxes, one inside the other, contained the sarcophagus and coffins of Tutankhamen.

Over the ensuing years, conditions at the site have not improved much. At the time of writing, his mummy is still roasting in his hot tomb in the Valley of the Kings. Plans are in hand to prepare a special Tutankhamen Museum in which his mummy will be housed in an air-conditioned glass case, but that should have been done decades ago.

These methods horrify us today, but they seemed very reasonable in those days. Tutankhamen’s mummy had 150 pieces of jewelry in the wrappings, and there were 2,000 objects in the burial chamber alone, and a total of 5,000 artifacts, counting the items from the ante-chamber and the storeroom, which explains why it took Carter so long to complete his work on the tomb. 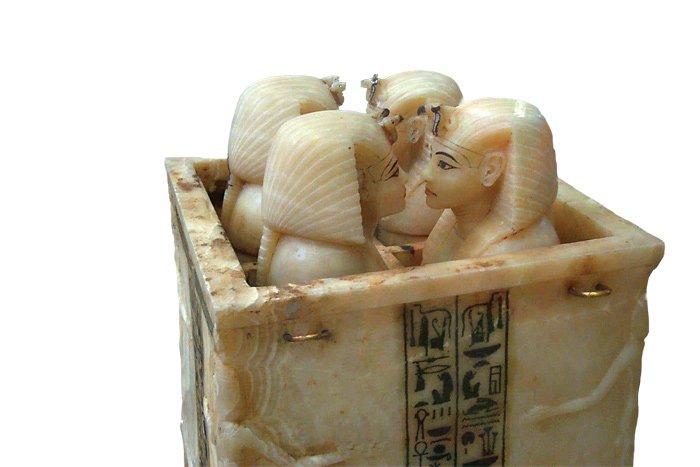 When Carter pierced the door into the tomb chamber, he was confronted with a wall of gold. It was a huge oblong box more like a wooden garage with gold plating. When he opened the doors at the end of this box he found inside another box, inside that another box, and inside that a fourth box. In this fourth box was a sandstone sarcophagus containing a nest of three coffins. The inner coffin alone was solid gold, up to almost one-half inch (12 mm) in thickness and weighing 242 pounds (110 kg).

In Egypt’s glorious history, Tutankhamen was a comparatively insignificant pharaoh, but the discovery of his tomb was the find of the century.