Bats: Equipped for the Hunt

Life as a Bat

Dusk falls on the farm, and most of the animals are settling down for the night in the old red barn. For some uninvited tenants, however, the day has just begun. Roosting upside down on the barn rafters, their chirping fills the hayloft as they prepare for departure. Through the open hay mow door, they fly out by the hundreds. At this opportunistic moment, a waiting owl swoops down and snags one of them. But once these agile creatures are out hunting on their own, they are hard to catch.

In the air, the big brown bats dart one way and then the other, chasing flittering insects. As the only true flying mammals, bats are well equipped for the hunt. Their wings can maneuver nimbly to abruptly change directions and carry them swiftly up to 40 miles per hour.1 Big brown bats also use their one-foot wingspan like a net to catch insects.2 The prey of bats includes pesky mosquitoes and agricultural pests like cucumber beetles.3 But how can they see the tiny insects in the dark?

Like most bats, big brown bats use echolocation to sense their surroundings and target their prey. They send out ultrasonic signals that bounce off surrounding objects and echo back to be interpreted as a sort of sound map. These high-pitched sounds are usually undetectable by the human ear, but bat calls can reach intensities of up to 137 decibels, which tops the booming of a rock concert.4 Many bats protect their ears by contracting their ear muscles each time they emit a call.5

Back in the barn, the bats’ young are waiting hungrily. The mother bats of the maternity colony must eat about as much as their body weight6 or more in order to nurse the blind and flightless pups7 that depend on them. After gorging themselves, they return to the barn. Chirps and squeaks fill the hayloft as the mothers search for their pups among the hundreds of bats. Amazingly, they’re able to find their own by call and odor.8 One pup has fallen from its roost and squeaks for help. Before the farm cat finds it, the mother bat picks it up and carries it back to the safety of the roost.

Like other mammals, the bats nurse their young and have hair, which they fastidiously groom. Besides their brown fur, big brown bats have black wings, dog-like snouts with sharp teeth, and perky ears like a Chihuahua. As the sun rises over the rows of corn, the nocturnal bats settle in to sleep and wait for the next hunt. 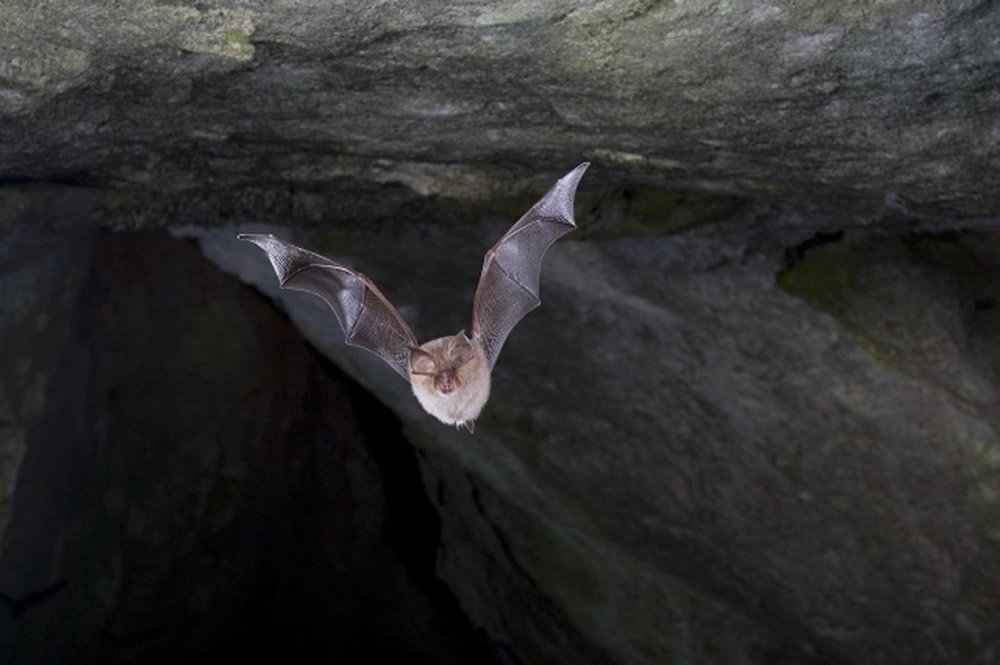 Your evolutionist friend has been taught that bats evolved millions of years ago from a small, nonflying mammal like a shrew or gliding squirrel. Somehow, random mutation and natural selection got it right over time as skin stretched out to form wings with the precise bone, muscle, and nerve structure for the unique flying mechanism of the bat. Such a complex change by mindless processes is not as simple as evolutionists would imagine, as Dr. Randy Guliuzza explains:

If bats evolved as the only flying mammal, evidence of transitional creatures should be found in the fossil record. However, the earliest bats in the fossil record have fully developed wings and other characteristic bat features. For example, Palaeochiropteryx tupaiodon was an early bat that had the inner ear structure of today’s bats, enabling echolocation. Discoveries of fossil bats that perhaps didn’t possess echolocation abilities is not a clincher for evolution because a whole sub-order of bats today—the megabats—do not echolocate (with one genus as the exception).

From a creationist perspective, the similarities between megabat and primate brains or microbat and dolphin echolocation are easy to explain. Such similarities show neither parallel (convergent) evolution nor a common ancestor but rather show common design. God created the animals with similar designs yet unique characteristics to fulfill his purpose for them in filling the earth (Genesis 1:22).

Bats have certainly filled the earth, fulfilling crucial roles in seed distribution, pollination, and insect control. Many people, however, fear bats as rabies carriers and “blood suckers.” The predation of animals is a result of the Fall. Sinful man is to blame for the entry of sin and death into the world (Romans 5:12). Yet God sent his Son to live a perfect life, die to take the punishment for sin, and rise from the dead in victory for those who turn to him in repentance and faith. “For the wages of sin is death, but the free gift of God is eternal life in Jesus Christ our Lord” (Romans 6:23).