Life as a Giraffe

Towering tall over the African savanna, the giraffe looks as if it belongs in the circus. It strolls on stilt-like legs, and its neck parades high in the sky. But the giraffe is no comic freak of nature. It displays divine design.

Since the giraffe gives birth standing up, the newborn calf falls more than five feet to the ground. Within 15 minutes after the calf is born, it stands up on those gangly legs. In short order, the nearly six-foot calf conquers the two distinct giraffe gaits.

The first gait is a slow pace as the giraffe alternately moves its left legs and then its right legs. When fleeing from predators like lions, the giraffe can gallop for a short time at speeds up to almost 40 miles per hour. A giraffe is most at risk to a lion attack when spreading its front legs apart and bending down to lap up water.

Although giraffe patterns might look identical, each giraffe has unique markings.

Being vulnerable to predators, half of giraffe calves do not survive their first year. The other half, however, may live 20 years in the wild. Adult giraffes usually thwart predators by their high vantage point, swift gallop, and powerful kick, which can kill a lion. The giraffe’s brown and cream pattern camouflages it from predators. Although giraffe patterns might look identical, each giraffe has unique markings.

Parasites and disease are often more deadly to the giraffe than predators. Giraffes ward off parasites by producing chemicals, which give a smelly scent to their fur, and tick birds make their living off giraffes by eating bugs like ticks.

Giraffes forage among acacia trees, using their 20-inch tongues to pluck off the leaves. Since their blackish tongues are prehensile, they can clutch things in their tongues. As ruminants, giraffes chew their cud halfway between the food’s travel through the four-chambered stomach.

A giraffe wields its long neck to communicate. It shows submission by stretching its neck straight and tall with nose pointed up. To show aggression, the giraffe swoops down its neck parallel to the ground. Male giraffes use their necks to fight for dominance by necking—basically an arm wrestle with their necks—and sparring—flinging their necks and ossicones (horns) into the opponent.

Giraffes are mostly silent creatures besides a few sounds like grunting and bellowing. But scientists have picked up low-frequency sounds, called infrasound waves, which giraffes may use to communicate, even at distances greater than a mile. 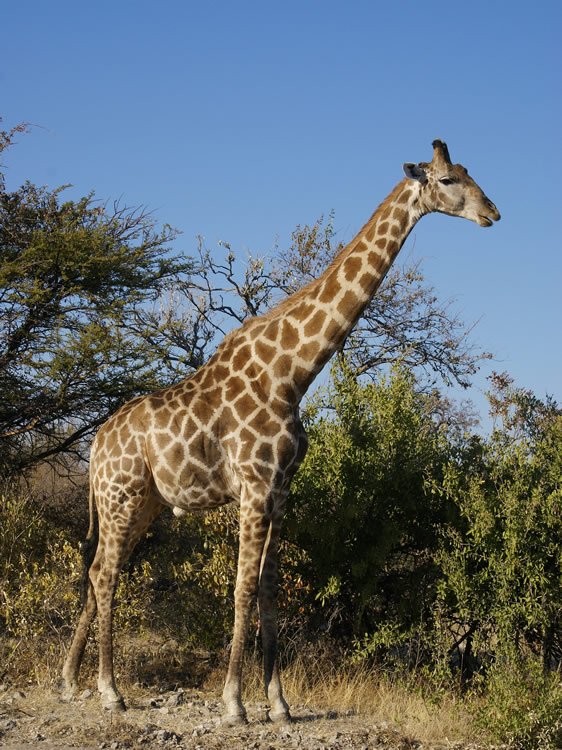 But today, through a greater understanding of heredity, we know that a giraffe with a stretched neck from reaching wouldn’t pass on that characteristic to its offspring.

Jean Lamarck and later Charles Darwin proposed that a giraffe evolved a long neck by inheriting traits acquired through use and disuse. Darwin thought a drought could have led to early giraffes needing to stretch their necks to reach leaves in tree tops. But today, through a greater understanding of heredity, we know that a giraffe with a stretched neck from reaching wouldn’t pass on that characteristic to its offspring.

A modified idea suggests that the long neck evolved through mutation and natural selection, which favored those giraffes that could reach higher branches. Such an idea raises the question: What did the younger giraffes eat, and why do giraffes even today often eat at shoulder height and below? More importantly, the proposed progression from short to long-necked giraffes is absent from the fossil record.2

Evolutionists also encounter a design dilemma for the evolution of a long neck. That six-foot neck requires an intricate blood vessel system to maintain proper blood pressure between the heart and brain. A giraffe bending its neck down to drink water is a marvelous display of design. The 25-pound heart that pumps blood way up that neck against gravity suddenly pumps down with gravity, which should cause the delicate brain to explode. But the blood vessels are uniquely designed with reinforced walls, bypass valves, a cushioning web, and sensor signals to moderate the pressure when the giraffe bends its neck down.

The reverse of this intricate system happens when the giraffe raises its head so that the pressure is regained and the giraffe doesn’t pass out. In addition, the tight skin on giraffe legs has been compared to an astronaut’s G-suit, because it prevents high blood pressure from pressing blood out of the capillaries.

How many giraffes blew their brains to pieces when bending down—how many passed out as they lifted their heads, becoming food for the lions—until the special features somehow evolved? It’s obvious that the very first giraffes had to have these special features right from the beginning. If not, they wouldn’t have survived to pass them on to their offspring!

The next time you visit the zoo, stop by the giraffe exhibit. With people gawking around you, discuss how the giraffe displays God’s handiwork. Look up that long neck, but don’t stop there. Draw your gaze up to the Creator and praise Him.

Worthy are you, O Lord,
to receive glory and honor and power;
for you created all things,
and by your will they exist and were created. (Revelation 4:11)