‘This sonar [of the bat] is a marvellous discriminator: in a bat–swarm, in cave or night air, a bat can know its own sound among thousands of mobile neighbours, even detecting its own signals if they are 2000 times fainter than background noises.

It can “see” prey, such as a fruitfly, up to 100 feet away by echo location and catch four or five in a second. And this whole auditory system weighs a fraction of a gram! Ounce for ounce, watt for watt, it is millions of times more efficient and more sensitive than the radars and sonars contrived by man.

‘The bat “sees” with sound better than light. The idea that such an echolocation system (which would have to work straightaway or else accidents would eliminate the creatures) “evolved” gradually by random mutation through unspecified “ancestors” is inadequate. Indeed, that numerous changes must have had to occur simultaneously if the creatures were to operate effectively must prejudice the rational man towards creation theory.’—Michael Pitman, Adam and Evolution, Rider & Company, London, 1984, pp. 219–220. 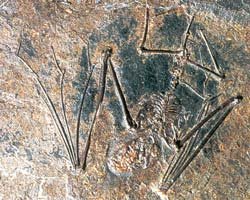 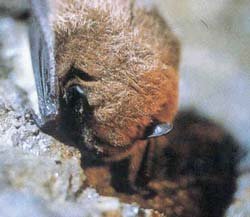 Above: A Fossil bat from shale supposedly 54 million years old on the evolutionary time scale. Its skeleton is essentially the same as that of today’s bats (above right), showing there has been no bat evolution either then or now.