The Dracula Connection to a Young Earth

Some scientists have suggested that the vampire bat developed its blood-sucking practice while it was an insect-eater, as most bats are.

Bats are often blamed in popular folklore for attacking people and drinking their blood. In fact, of the many hundreds of genera (singular=genus) of bats, only three actually subsist on blood.1 Large mammals are the preferred targets of vampire bats, though they will also drink the blood of smaller animals (including reptiles) if necessary. The wound by the vampire bat is not usually severe, and often does not even awaken the wounded animal or person. The volume of blood lost is usually small. However, there is always the danger of infection, including rabies.

Obviously, vampire bats would not have been carrying out their habit of craving and drinking blood before the Fall. Some scientists have suggested that the vampire bat developed its blood-sucking practice while it was an insect-eater, as most bats are. It would pick off the insects on a vertebrate and, when it accidentally wounded the host animal, would also drink its blood. Eventually, it switched to exclusively drinking blood. 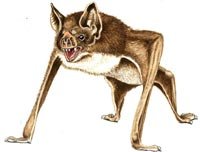 A vampire bat. The blood-drinking habits of several species of bats have generated much superstition.

But could this process occur rapidly enough in a world created only a few thousand years ago? One clue comes from one species of Darwin’s finches. Some of them, instead of eating insects, have started attacking other birds and drinking their blood.2 This indicates that such behaviour can easily arise among creatures which normally do not desire blood.

I suggest that bats were originally created primarily to eat fruit, nectar and/or insects. Most bats today are insect-eaters. (The death of insects arguably need not be death in the biblical sense, because invertebrates are not conscious and perceptive—“nephesh”—creatures in the same way that vertebrates are.3) After the Fall, vampire bats may have begun drinking blood if they accidentally wounded their host. Eventually they acquired a preference for blood, which then became their exclusive diet.

Interestingly, the family containing vampire bats (Phyllostomatidae) has, on the whole, certain anatomical features that would have made it easier for blood drinking to arise in them rather than another bat family. Most notable is the fact that they already have a certain type of specialized sharp teeth. It would have taken only a small modification to have them used for piercing flesh instead of fruit. The structure of the tongue in the whole family happens to already be well-suited for lapping blood in the way vampires do. Clearly, such “pre-adaptation” does not necessarily mean that a structure was originally designed for that purpose.4

This helps explain why blood eating arose only among a few South American bats, and not on any other continent. The bats on other continents had too much anatomical change to overcome in contrast to the Phyllostomatidae (in order to give rise to individuals which would attack animals and drink their blood). This fact fits better with the young earth creationist time frame than an evolutionary one. Had millions of years been available, many more bats should have had the time to develop such a blood habit. But with just thousands of years available, only a few of those bats which already possessed anatomical features facilitating blood sucking actually switched to it.