and Their Little Cousins

Bats are amazing animals that display the unlimited creativity of our God.

My love of bats began on a July night several years ago, when I was awakened in the wee hours by a juvenile Myotis lucifugus—commonly known as the little brown bat—buzzing around next to my pillow. Since that memorable night, I have learned all I could about my uninvited guest and his kin. I conclude that bats are some of the most amazing creatures on the planet. 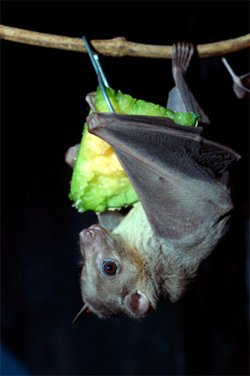 The Egyptian fruit bat (Rousettus aegyptiacus) is a megabat with a soft, dog-like muzzle. It is the only genus of megabats that uses a form of echolocation.

Bats comprise nearly one fifth of all mammal species and are distinct from other mammals in several ways.

Bats are like other mammals, which nurse their young with milk and have hair, but they are unique in other incredible ways. Unlike most orders of mammals, the bat order—Chiroptera—has lots of different species. In fact, there are over 1,100 different bat species, making up one-fifth of all mammal species. As the only mammal designed for sustained flight, bats are very distinctive in appearance.

All bats can fly. In fact, their biological classification, Chiroptera, literally means “hand wing,” and it is a very apt description. The bone structure in a bat’s wing is comparable to the bone structure in a human hand. Imagine flapping your hands and being able to fly—this is exactly what a bat does.

Not surprisingly, the flight pattern of insect-eating bats looks extremely different from that of most birds. If you saw a dark shape flying toward you at dusk, you would probably not mistake a bat for a bird. While most bird’s flight paths are graceful, the path of insect-eating bats appears haphazard, with many abrupt changes up, down, right, and left.

There are two distinct suborders of bats, Micro- and Megachiroptera. Most bats (over 800 species) belong to the suborder Microchiroptera. These small bats, or “microbats,” eat primarily insects and use a remarkable “technology” called echolocation.

Microbats produce a high-pitched sound (usually inaudible to the human ear) and listen for the echo as the sound waves bounce off objects. This amazing ability allows the bat to instantly “see” exactly where objects are, in spite of the darkness. Humans have borrowed the principles of echolocation for use in submarines and other technology, but the bats’ abilities remain far superior to human imitations, a testimony to the genius of their Designer.

Microbats use their echolocation not only to navigate, although that might have been the original purpose, but also to locate and nab insects. A single little brown bat can eat up to a thousand mosquitoes in one hour—so imagine what a colony of these flying mammals can do! Many people put bat houses in their yards for this very reason.

One of the most remarkable features of micro- and megabats is their ability to hang upside down by their tiny, spindly toes without growing tired or losing their grip. Bats’ legs project sideways and are amazingly designed for hanging. The bat has tendons in its feet that attach to its upper body, so that when it rests upside down, the bat’s weight pulls the toes naturally into a clenching position without the bat exerting any effort.

The bat’s heart and blood vessels are designed to keep all its blood circulating rather than rushing to its head. You could even say that hanging upside down is a bat’s default position—where it is most at rest.

My, What Big Wings You Have

As much as I enjoyed my unexpected little visitor, I have to admit that my favorite bat is the megabat. Megabats are also known as “flying foxes” because of their almost canine appearance. Megabats, native to the tropical climates of Asia, Africa, and Australia, eat primarily fruit, nectar, and pollen—possibly the original bat diet before the Fall—although some eat fish and small mammals. 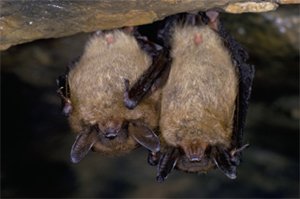 Two little brown bats (Myotis lucifugus) hang upside down side-by-side in a bat roost. The little brown bat is one of the most common bats in North America. It roosts in trees and buildings during the summer, moving underground to caves and empty mines for hibernation during the winter.

Flying foxes are often easy to spot during the day because of their large size and raucous noise.

With rare exceptions, megabats do not use echolocation; their lack of sonar, not their size, is one of the primary differences between megabats and microbats, since some megabats are quite small. Some, however, are extremely large, with wingspans of approximately six feet (1.8 m), silky fur, and surprisingly handsome faces. The golden-capped fruit bat is considered the largest bat in the world (weighing up to 3.3 pounds, or 1.5 kg), and is a truly beautiful animal.

Evolutionists continue to be puzzled by the differences between megabats and their smaller cousins. Some consider megabats to be more closely related to primates than microbats, and some speculate that the two types of bats developed independently of each other.

A far more logical solution is that bats were designed by a wise Creator, who placed in them the incredible potential for variation that we see today, whether it’s a little brown bat on your pillow or a giant flying fox in Asia.

Bats are amazing, fascinating animals that display the unlimited creativity of our God.

Next Article The Wonders of Your Own Backyard