The trilobite is the official fossil of Ohio. And just across the Ohio River, in Covington, Kentucky, is “probably the largest invertebrate fossil prep lab in the world.” So says Dan Cooper, who with his sons Ben and Jason carry on the tradition started by his parents, Don and Lou. Half a century ago they began collecting invertebrate fossils—especially trilobites—which are prominent features of the Tristate (Ohio-Indiana-Kentucky) region’s geology. Today, their family business—Trilobites of America—successfully searches out, excavates, and restores invertebrate fossils from all over the country.

Restoration of fossils, whether they are found intact or in fragments, is a painstaking task. The Cooper’s lab is equipped with tiny pneumatic drills and airbrushes to pry the precious preserved material from rocky obscurity. As seen in this video, these bits of fossilized material must be reassembled like pieces of a three-dimensional jigsaw puzzle. The Cooper family lab supplied a fossil in 1985 to showcase the trilobite’s selection as the Ohio state fossil, and it has supplied specimens to the Smithsonian and other museums as well as private collectors. The detailed work is well worth the effort, as it allows paleontologists to see complex designs preserved deep in the fossil record. Trilobites found in the Ordovician rock, like that in the Cincinnati, Ohio, area, are often preserved well enough to reveal a biologically unique eye anatomy. 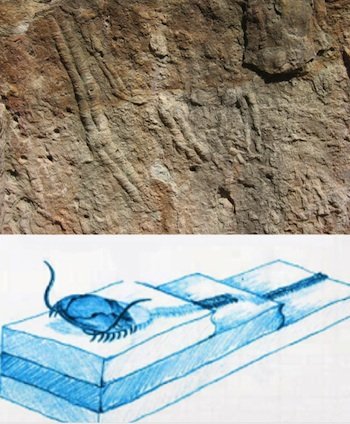 Trilobites are typically not found in the same layers as their fossilized tracks (shown in this photograph) but rather above them, as shown in the diagram. Conventional dating would consider the rock layers separating them to have been laid down slowly over millions of years. But trilobites likely left their tracks to be preserved in mineralized watery mud as they scrambled to escape the mud being dumped on them by the upheavals associated with the global Flood. They certainly would not have been able to burrow up through solid rock. Because recently dumped layers of water-borne mud and sediment would have been soft enough to allow their attempts until they were finally overwhelmed and buried, the presence of such trilobites-above-tracks is consistent with the Flood model of geology. See “Five: Tracks But No Trilobites” for more information (image credit: trilobite tracks photo, Dr. Andrew Snelling; diagram Answers in Genesis).

Trilobites, are found in the Cambrian, Ordovician, and Devonian layers of the fossil record. According to conventional evolutionary reckoning they persisted for almost 300 million years, becoming extinct around 250 million years ago.1 Those in the Cincinnati area are in Ordovician rock, dated around 440 million years old. Those dates, as we often note, are derived from interpretations based on unverifiable assumptions, and the rock layers do not prove millions of years of history. (See Doesn’t the Order of Fossils in the Rock Record Favor Long Ages? for more information.) Though found deep in the geologic column among the earliest multicellular creatures to be fossilized, trilobites are not simple creatures. They display a complexity difficult to explain from an evolutionary point of view. 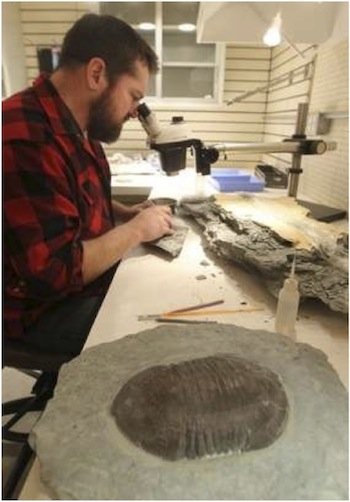 Ben Cooper gets a closer look at details as he excavates in miniature, carefully removing the pieces of fossilized Isotelus and then reassembling the pieces to restore the animal’s anatomy. Isotelus is the trilobite genus chosen as Ohio’s state fossil.2 In the foreground is a trilobite that he has already restored. Such detailed fossils make it possible to study the anatomy of these complex extinct invertebrates. Be sure to watch the video at News.Cincinnati.com to gain a better appreciation of the techniques required to produce the restored fossils you see in museums. Image credit: Patrick Reddy, The Enquirer, News.Cincinnati.com. 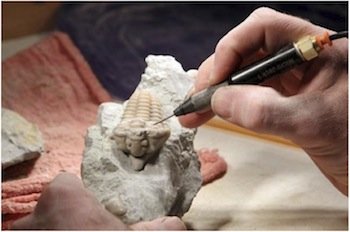 Here a worker in the Cooper family’s Covington, Kentucky, laboratory (located only 20 minutes from the Creation Museum) uses a pneumatic drill to remove sediment encrusting and obscuring a rare fossilized Spathacalymeme. This trilobite genus is known by only a small number of complete specimens. Notice the prominent shovel-like snout protruding from it. This unusual feature is thought to have been useful for digging through sediment, possibly in search of food. Such variations among trilobites, a very complex invertebrate, are consistent with biblical history. God created animals, fully equipped for life on earth, to reproduce after their kinds and yet to vary within their kinds as we see in all sorts of animals today. Image credit: Patrick Reddy, The Enquirer, News.Cincinnati.com.

These are some of the beautiful trilobite fossils you will encounter when you visit the Creation Museum in Petersburg, Kentucky, near Covington. These Phacops rana milleri were recovered from Upper Devonian rock in Silica, Ohio. Ohio’s Phacops trilobites, found in the Ordovician and Devonian layers, are best known for their schizochroal eyes, a complex double-lens design that sharpens the focus of an image blurred by a spherical lens’s curvature. The collection of trilobites at the Creation Museum is housed in the Palm Plaza and contains specimens from the Cambrian, Ordovician, and Devonian layers. While many trilobite fossils are fragmentary, we are fortunate to also have a number of complete specimens, many of which were recovered from a fossil graveyard where large numbers were suddenly and catastrophically buried in their shallow sea homes. Image credit: Amazing Fossils on Display at the Creation Museum.

Trilobites, like insects and horseshoe crabs, are arthropods. But they have a feature even more complex than other arthropods. Trilobite eyes, like those of insects, are compound eyes capable of three-dimensional vision, very useful for sensing motion. But in addition to this feature, the eyes of some varieties of trilobite are equipped with a unique focusing mechanism to correct for problems with a non-flexible lens. Called schizochroal, this sort of lens combined two lenses to refocus the blurry image produced by a spherical lens, keeping everything in focus. Humans have designed such lenses, but God did it first, about 6,000 years ago, when He created the trilobite.3

The Cincinnati area is rich in fossils, particularly invertebrate sea creatures, like trilobites, so much so that similar strata are called “Cincinnatian” elsewhere in North America. This region has intrigued fossil hunters since the 1790s. According to Answers in Genesis geologist Dr. Andrew Snelling, this area’s Ordovician rock layer is “one of the most well stocked and uniquely well-preserved ‘fossil graveyards’ on the planet.”

The animals fossilized in the Cincinnati area were subjected to violent storm conditions. Today, the region is 500 miles from the sea. Secular scientists speculate that the ocean rose such that this region was actually a submerged coastal area.

Biblical history of the global Flood explains these Ordovician findings—the violent storms, the submergence of the whole region, the predominantly marine fossils, and their patterns of burial. Ordovician rock, like the Cambrian layer just below it, is deep in the geologic column and contains fossils of the first creatures to be torn from their habitats and catastrophically buried during the global Flood. As the fountains of the deep broke up (Genesis 17:1), volcanic activity would have generated violently surging ocean waters initially burying sea creatures living on or near the sea bottoms. These are just the sorts of creatures preserved in Cincinnatian strata. The geologic column doesn’t tell us when these creatures evolved but rather when they died and were buried. The geologic column, much of which is a timeline of the tumultuous Flood year, is not a timeline of the evolutionary emergence of life.