Cincinnati—Built on a Fossil Graveyard

Many of us go about our daily lives, going to work and back home, without realizing we live atop massive graveyards, often covering hundreds of square miles. Cincinnati—the region where the Creation Museum was built—is just one such locale.

A dark and stormy night, a series of violent deaths, a mass grave later discovered by construction workers who unearthed piles of dismembered body parts—it sounds like the makings of a gruesome detective story.

These circumstances are repeated in various locales all over our planet, but we are oblivious to the mysteries that lie under our feet, waiting to be explored and explained.

The Creation Museum, for example, was built on top of one of the most wellstocked and uniquely well-preserved “fossil graveyards” on the planet. Fossil hunters from around the world travel here specifically to hunt for trilobites and other strange sea creatures found in these rock layers.

It’s easy to find these fossils in the exposed rocks along the banks of the Ohio River and its tributaries. But they are best found in road cuts along the interstate highways and along many side roads.

Several puzzles immediately strike even the most casual observer, begging for explanation.

Piles of Marine Body Parts—500 Miles from the Ocean

One puzzle is that these layers contain untold trillions and trillions of fossilized body parts, all belonging to creatures that once lived at the bottom of a shallow sea. What catastrophe ripped apart all these animals, and how did they end up in the center of the continent, 500 miles (800 km) from the nearest ocean?

Before we consider the possible answer, let’s look at the facts. These fossils came from a bizarre menagerie of mostly extinct creatures that once filled the shallow seas. These were invertebrates (creatures without backbones). Scientists give them strange-sounding names, but many of them look very much like modern creatures, such as lampshells (brachiopods) (Figure 1), lace corals (bryozoans), and sea lilies (crinoids), along with trilobites.1

When you pick up broken limestone slabs on the roadside, you usually don’t see whole creatures.2 Often all that is visible of the coral-like bryozoans are stacks of broken “stems” (Figure 2). Similarly, often all that is preserved of the sea lilies (crinoids) are the columnals (“stems”) and small discs from these broken-up columnals (Figure 3). The trilobites, too, are mostly found only as fragments.

How did this jumble of sea creatures end up in Cincinnati, far from the sea?

Some sort of catastrophe destroyed the shallow sea communities where trillions and trillions of trilobites and other strange sea creatures once lived. Their fossilized body parts are now found jumbled together in exposed rocks all along Cincinnati’s highways (as shown in the author’s photos below).

BRACHIOPODS (Figure 1) “Lampshells” are sea animals with hard shells that were hinged at the rear. The Flood ripped the shells apart, burying piles of them in slabs of limestone. BRYOZOANS (Figure 2) “Lace corals” were colonies of sea animals that lived together in connected modules, called zooids. The Flood tore apart these colonies, leaving only piles of broken “stems” and “branches.” CRINOIDS (Figure 3) “Sea lilies” were animals that attached to the seafloor on long columns. The Flood tore apart their bodies, leaving only piles of broken pieces of the stems, called “columnals.”

A Testimony to the Global Flood Catastrophe. The dumping of such a vast number of body parts in one place is consistent with a massive, violent catastrophe that destroyed these creatures’ habitat and then rapidly buried their remains in layer after layer of clay and lime muds.

All the secular fossil hunters who have investigated the Cincinnati fossil layers have come to the same conclusion—they were deposited under storm-dominated conditions! Indeed, their studies suggest that the layers were deposited when the Cincinnati area was being repeatedly battered by hurricanes and severe storms. They say that the ocean had advanced over the North American continent from the northeast, burying this region underwater, just offshore of the resultant coastline.

But creationists have a more logical explanation, based on Scripture. As the fountains of the deep broke up (Genesis 7:11), hot magma rose to erupt on the seafloor and pushed the ocean water up and out. The surging water destroyed the nearby seafloors and then rolled forward until it rose over the continents, in wave after wave, depositing the remains of the different habitats as it went. 3, 4

The rock layers in the Cincinnati region are relatively low in the fossil record. This means they must have been among the first destroyed and buried by the Flood.

The fossils in the Cincinnati region are found in a series of rock layers labeled conventionally as upper Ordovician. The layers are relatively low in the fossil record, just above the Cambrian (also full of trilobites and other sea creatures). This location means that these creatures must have been among the first destroyed and buried by the Flood. (The dinosaurs and other land animals weren’t buried until later, which explains why we find them higher in the fossil record.5)

There is a general pattern to the fossil content, consistent with the order that creatures were likely buried. First are smaller creatures that were attached to the seafloor, followed by larger and more mobile creatures.6

Another puzzling feature, as you drive down Cincinnati’s roads, is the alternating sequence of thin limestone followed by thin shale beds, stacked right on top of one another (Figure 4). The beds of limestone are made of lime muds that cemented together the remains of sea creatures, while the beds of shale are made of softer clay muds from the seafloor and have weathered away.

How did this jumble of sea creatures ever end up in Cincinnati, far from the sea? Fossil experts agree that a series of ocean storms ripped apart these creatures’ homes. As the turbulent waves advanced over portions of the continent’s interior, they rapidly buried these animals’ remains in layer after layer of clay and lime muds. 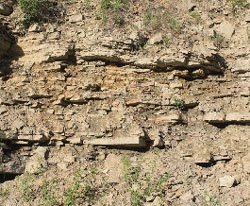 FIGURE 4—On Cincinnati’s roadsides you will see alternating thin layers of limestone (the hard rock protruding from the wall) and shale (softer, eroded layers) (from the Fairview Formation).

Consequently many slabs of limestone have broken off and fallen along the roadsides. These slabs are covered with fossils, making the roadsides ideal locations to collect fossils.

You find some interesting patterns as you investigate these layers. Within the lowest layers, collectively known as the Kope Formation, the shale beds average 7.5 inches (19 cm) thick and account for almost three-quarters of the volume of rock. The limestone layers average 2.5 inches (6 cm) in thickness and account for most of the remaining volume. So it appears that most of these lower layers consist of clay muds, with some animals.

In the Fairview Formation, which is the next set of layers, the limestone beds comprise about half the thickness of the formation. The beds at this level are slightly thicker than the Kope beds, averaging 3 inches (8 cm). They are also more closely spaced. This is what you would expect to find, as creatures struggled to dig out of the initial deposits but eventually succumbed to the continually rising mud deposits.

Even the casual observer can see this cyclic pattern of limestone and shale layers. Several detailed studies have confirmed the regularity of this pattern,7, 8, 9, 10, 11 although some disagree over the interpretation of details of the depositional cycles.

Testimony to Colossal Storms during the Flood. Despite the differences about the details, all the secular investigators have come to the same basic conclusion—these alternating limestone and shale beds were deposited as colossal storms battered the coastline of North America, which was largely underwater.

The conventional argument is that the rising and falling water levels sent water over the continent, depositing limestone and shale layers over millions of years, particularly as the storm surges waxed and waned. But contrary to this interpretation, there is evidence that strong water currents were flowing over these sediment deposits as would have occurred if the whole earth were underwater, leaving telltale signs like megaripples, which are visible today.

This storm-winnowing process could also explain the variations in fossil content. Storms sweeping across the ocean floor would “uproot” the brachiopods, bryozoans, and crinoids and then bury them as debris in the accumulating sediment layers.

These conditions and processes would be expected during the global catastrophic Flood described in the Scriptures. The thin alternating coarse-grained limestone and fine-grained shale layers could be deposited quickly under such catastrophic conditions. On a smaller scale, a volcanic eruption at Mt. St. Helens in 1980 deposited a 25-foot bed of volcanic ash—with lots and lots of alternating coarse and fine layers—in less than a day.12

What more evidence is needed as testimony to the biblical Flood? As the apostle Peter declares in 2 Peter 3:5–6, only the willfully ignorant could miss this evidence and its obvious implications.

Dr. Andrew Snelling holds a PhD in geology from the University of Sydney and has worked as a consultant research geologist in both Australia and America. Author of numerous scientific articles, Dr. Snelling is now director of research at Answers in Genesis–USA.
Previous Article Experiment: Walking on Eggshells Next Article Counterfeit Christian College