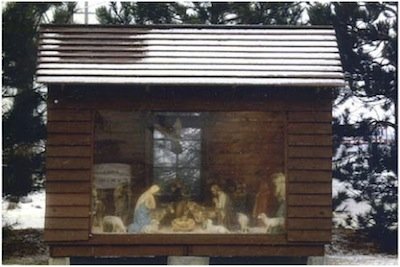 Nativity scenes in public places have become the yearly target of those who demand that those around them refrain from mentioning Jesus Christ in any God-honoring way in their presence. Yet our constitutionally protected American freedoms allow these public expressions of honor for the Lord. Each year many public officials are intimidated into disregarding those rights, forcing Christians to appeal to the courts for protection. Image credit: cafemom.com at http://www.Examiner.com.

“No other federal holiday is blacklisted like Christmas,” says Liberty Counsel attorney Mat Staver. “It’s okay to say ‘Merry Christmas.’”1 Yet it is all too common for public officials and private business owners to be intimidated into trying to excise Christ from Christmas. That happened four years ago in Warren, Michigan, when the Freedom from Religion Foundation sent a threatening letter to the Macomb County Road Commission, and the city subsequently denied a permit for a nativity scene that had graced the Mound Road median every Christmas for sixty-three years. The Satawa family had placed the nativity scene there every year since 1945 when community leaders decided the display could be placed in the median, so the family filed suit claiming the permit denial involved a violation of their First Amendment rights.

The nativity scene will return next Saturday after its four-year absence. The Sixth Circuit U.S. Court of Appeals has ruled that the private display erected by the Satawa family each year is constitutional and that the city’s denial of a permit for it violated their First Amendment rights. The First Amendment of the Constitution of the United States guarantees:

Congress shall make no law respecting an establishment of religion, or prohibiting the free exercise thereof; or abridging the freedom of speech, or of the press; or the right of the people peaceably to assemble, and to petition the Government for a redress of grievances.

Though likely to be accompanied by a disparaging banner from the atheist group, the court’s verdict is in plenty of time for Christmas, and the display will soon be up. John Satawa says, “I’m very happy we’re able to keep Christ in Christmas. My feeling is, this is a great victory for Christians in this country.”

“Unfortunately some public officials mistakenly believe that censoring religious viewpoints from the public square is the safest approach, when, in fact, that violates the First Amendment,” explains Staver.2 Yet despite common opinion, even public schools are not legally barred from Christ-honoring expression in speech, symbol, and song. Liberty Counsel points this out in its December 4 press release:

Public schools are not religion-free zones. Classroom discussion of the religious aspects of the holidays is permissible. A holiday display in a classroom may include a nativity scene or other religious imagery, so long as the context also includes secular symbols. A choral performance may include religious songs. Indeed the majority of the songs may be religious, so long as the performance also includes secular holiday songs. If the students select their own songs, there is no requirement that the songs include secular numbers. Students may distribute religious Christmas cards to their classmates during non-instructional time, and students who are not required to wear uniforms may wear clothing with religious words and religious jewelry.”1

Not only does the First Amendment protect American freedom to publicly celebrate the birth of Christ, business owners should note that the latest Rasmussen Reports telephone survey shows 70% of Americans prefer to be wished “Merry Christmas” instead of “Happy Holidays.”3

So don’t be intimidated. It’s time to take back Christmas.