If you could ask a leading creationist who has spent his life studying fossils, “What’s the most amazing example of design in all the animal world?” what would he say? Well, we did ask; and here’s the story Dr. Wise told.

What do physicists and paleontologists have in common? One analyzes equations while the other digs fossils. But when it came to discovering God’s complex design for trilobite eyes, expertise from both fields was required.

As a child in Italy, Riccardo Levi-Setti started collecting fossilized trilobites, an extinct group of sea creatures somewhat similar to horseshoe crabs. This interest led to curiosity about rocks, then to crystals in rocks, then to the chemistry of crystals, and finally to the physics behind chemistry! Though he eventually earned his doctorate in physics, his love for trilobites never died.

That’s why a physicist showed up at a talk about trilobite eyes, given one fateful day in the early 1970s by renowned paleontologist Euan Clarkson.

Soft tissues are not usually preserved in fossils. But since the lenses of trilobite eyes were made of the mineral calcite, they are often preserved. Clarkson had cut through trilobite lenses to study their design. To his surprise, he told the audience, one group of trilobites had lenses unlike any others he had ever seen. Not only that, but there were two different unique shapes, and different trilobite species had one or the other shape.

Clarkson admitted he didn’t know why. But Levi-Setti did.

An Old Fix to a Modern Problem 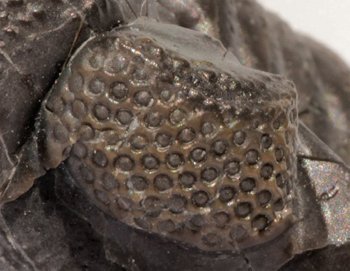 Like flies, undersea creatures known as trilobites had “compound eyes” made of dozens of tiny lenses. Each individual lens usually produces a blurry image. But certain trilobites (order Phacopida) had special lenses that produced crystal-clear images, even on the murky seafloor.

Levi-Setti immediately recognized these as solutions to a problem that had long vexed early lens makers, known as “spherical aberration.” The problem arises because solid lenses, like those made of glass (or calcite), aren’t flexible. This prevents the lens from focusing well along the edges. The lens shapes were the only two solutions that humans have ever devised—one by René Descartes in 1637 and another by Christian Huygens in 1690. Trilobite eyes had the ideal lenses to see clearly!

O Lord, how manifold are Your works! In wisdom You have made them all. The earth is full of your riches. (Psalm 104:24)

As amazing as that discovery was, there was more. Unlike humans, trilobites had dozens to hundreds of lenses in each eye, like the compound eyes on flies and other insects. Compound eyes are well designed for detecting motion. Since each lens faces in a slightly different direction, the brain can quickly determine when an object moves from one field of view to another. This is why it is so hard to sneak up on a fly!

But insects and most trilobites do not have lenses that correct for spherical aberration. Why the difference?

Levi-Setti was quite excited about the trilobites’ solutions for spherical aberration. He went up to Clarkson and struck up a conversation, friendship, and collaboration. Levi-Setti’s love for trilobites and physics had come together!

For example, these eyes could see better in the low light of the ocean bottom where the trilobites lived. Most compound eyes collect light primarily near the center of the field of view, but they collected light from the entire field of view. And since each lens was larger, it could collect more light, much like the large eyes of owls and other night creatures.

The trilobite could see three dimensions without both eyes.

How? The lenses were set apart a bit and bulged out, allowing overlapping fields of view. Since the overlap is the very same region that the special lens clears up, it is reasonable to assume that God purposefully designed trilobite eyes to permit three-dimensional vision.

The amazing 3-D design gets even better. In several species the two eyes bulge out so far that they provide an additional overlapping field of view. This provides an additional three-dimensional perspective, like that in humans.

With this “double 3-D” ability—provided by multiple lenses and by two eyes—these trilobites were probably capable of locating obstacles, food, or predators with extremely high precision.

A few trilobites even had large, crescent-shaped eyes wrapped around stalks, allowing them to see in all directions around and above the trilobite. Some eyes had an overlapping zone that allowed three-dimensional vision in a full arc above the trilobite!

Such an incredible optical system is known in no other organism, living or dead. As evidence of God’s special design, truly the trilobite eyes have it.

Unlike the flexible lenses in our eyes, hard lenses create distortion on the edges, known as spherical aberration. Humans discovered only two shapes to solve this problem—René Descartes’ lens (1637) and Christian Huygens’s lens (1690). Later, it was discovered that some fossilized trilobite eyes already had these lens shapes!

Dr. Kurt Wise earned his PhD in paleontology from Harvard University and has published numerous articles on biblical geology. He has also written the book Faith, Form, and Time. He is now the director of the Creation Research Center at Truett-McConnell College.
Previous Article Created Creature Next Article What Was God Doing Before Creation?