Five: Tracks But No Trilobites

Why do we find lots of trilobite tracks in lower rock layers, but we don’t find any trilobite fossils until higher up?

I was excited, scampering up a remote hill near Death Valley. I finally had an opportunity to visit one of only a dozen or so places in the world where you can find the lowest layers of animal fossils.

Starting near the car, I scoured the ground very carefully for fossils. After examining one layer I would search the layer above it, slowly working through higher and higher rocks. The flaky shale rocks were the kind that preserves fossils well, so I was sure I’d find something.

At long last I found a trilobite trackway—the only fossil I found in that layer. In the next layer I found several more tracks, but no remains of the trilobites themselves. As I went up, the tracks became more abundant, but I found not the slightest hint of the animals that made the tracks. 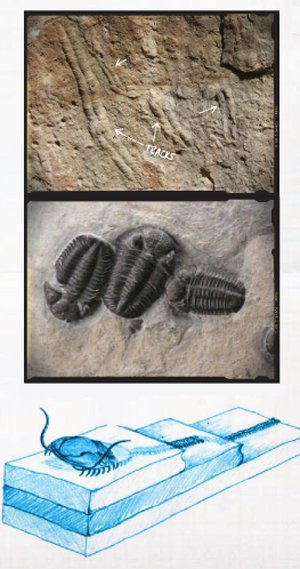 Stopped Dead in Its Tracks

Scientists have discovered lots of amazing trilobite tracks in the fossil record (called cruziana, top photo). They have also found mass graves of wonderfully preserved trilobites (bottom photo). The puzzle is that the bodies appear in layers above the tracks. If the layers were deposited over millions of years, this would be a great mystery. But what if the trilobites were scurrying for their lives, climbing through successive waves of mud that flooded over them, and then they finally expired from exhaustion? Do we have any record of a massive catastrophe that could form so many layers so quickly, then kill the trilobites?

Then suddenly I came to a layer jam-packed with trilobite “shells.” I had been concentrating so hard on finding just one little fragment of a trilobite that the abundance startled me.

Odd. Why would dozens of feet of rock have tracks but not the animals that made them? This finding is especially mysterious if you believe the rock was deposited over thousands of years.

Interestingly enough, the site is not unique. Tracks are found before trilobites everywhere that the lowest trilobite layers are known.

Such a worldwide pattern of fossil layers suggests that a global catastrophe, such as the Bible describes, once struck the world. What if, when the “fountains of the great deep were broken up” (Genesis 7:11), the spreading waters surprised the trilobites living on the ocean bottom? As the water became muddy, trilobites scurried about in terror, leaving their tracks behind them. Then as a layer of mud covered their tracks, they climbed through the mud and left tracks on the next layer—repeating this process until they finally succumbed in exhaustion and were themselves buried and preserved.

Follow the trilobite tracks, and they lead us to the worldwide Flood of the Bible!