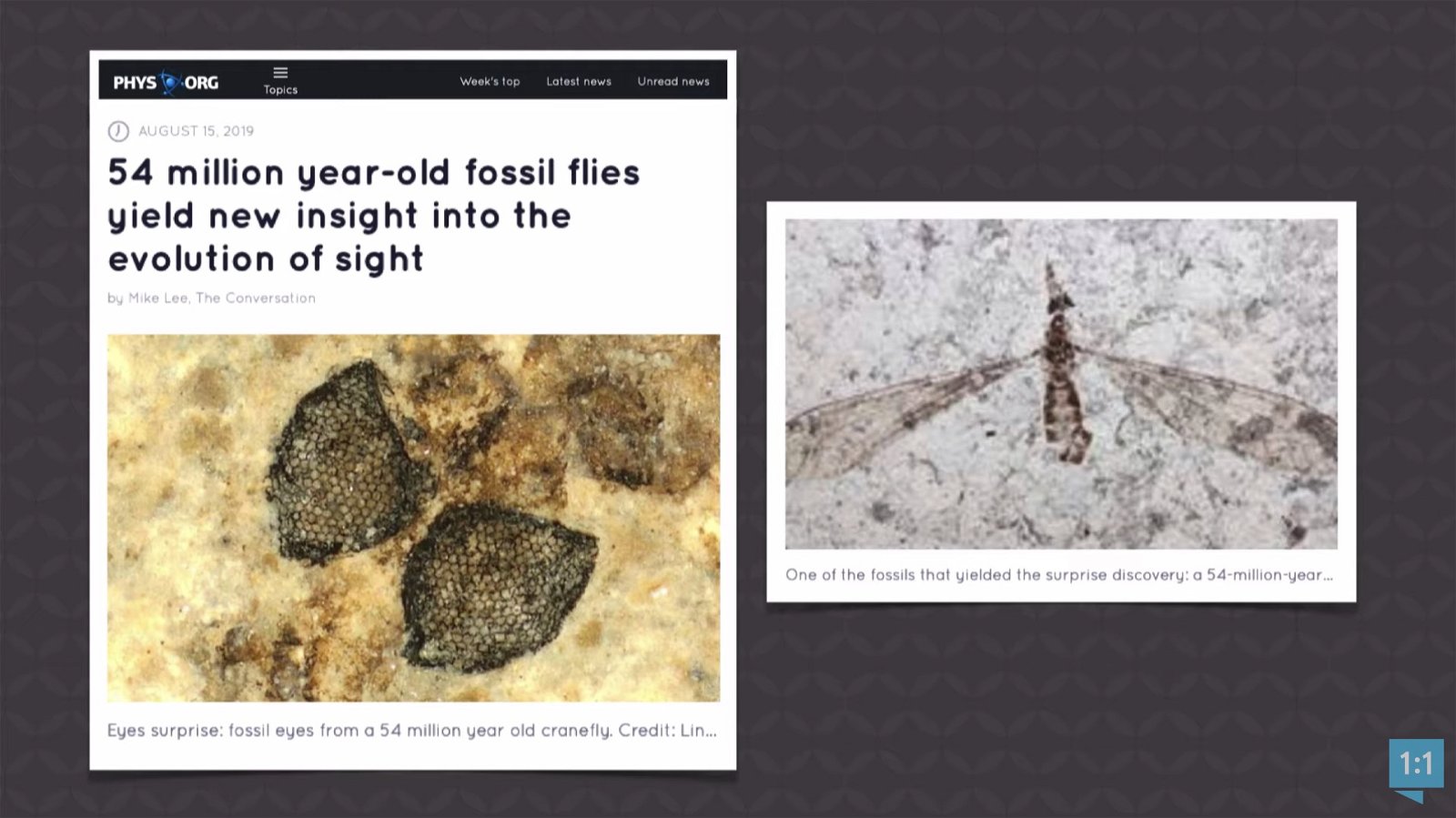 Convergent evolution—it’s the convenient term used to describe similar features (often very complex ones such as echolocation or flight) that have supposedly arisen in organisms separated by vast ages of evolutionary distances (millions of years) due to similar environments or stressors. And the newest example of so-called “convergent evolution” is the eyes of crane flies and humans, as supposedly revealed by the fossil record.

Scientists found that the insects trap light similarly to the way humans do, using the pigment melanin.

Scientists discovered a cache of crane fly fossils, dated to be allegedly 54 million years old. These crane flies were exquisitely preserved in volcanic ash in what’s now Denmark—so well-preserved that their complex eyes could be studied. Scientists found that the insects trap light similarly to the way humans do, using the pigment melanin (octopus and squid are also said to have complex eyes like ours). This pigment layer in the eye (the same pigment that gives our skin its particular shade of brown) stops light from “bouncing around and interfering with vision.”

The popular summary of this find explains that insects, like humans, have an anti-reflective layer, but it was assumed to be made of something different because insects and humans are so distantly related on the supposed evolutionary tree of life and because insects’ eyes are so different from ours. But these fossilized crane flies had “human-like melanin” and, when they examined living crane flies, they found they had the same layer with melanin. No evolution in 54 million years!

This isn’t an example of convergent evolution. It showcases the Designer who designed everything to do what it does and do it well. When we see examples of similar design, we shouldn’t think of evolution (which can’t explain how the genetic information needed to build eyes, let alone everything else, could have arisen by natural processes)—we should think of our Creator who masterfully used similar designs throughout his creation. Engineers, architects, and designers do this today too.

The item was discussed on Monday on Answers News with cohosts Dr. Georgia Purdom and Dr. Gabriela Haynes, along with frequent guest and medical doctor Dr. Tommy Mitchell. Answers News is our weekly news program filmed live before a studio audience here at the Creation Museum and broadcast on my Facebook page and the Answers in Genesis Facebook page. We also covered the following topics:

Watch the entire episode of Answers News for August 19, 2019.

Previous Article “We Read Your Book Dinosaurs of Eden  . . . by the End . . . He Was on His Knees” Next Article Enjoy This Tour of the Ark Encounter with Ken Ham