Image by Dwergenpaartje, via Wikimedia Commons. 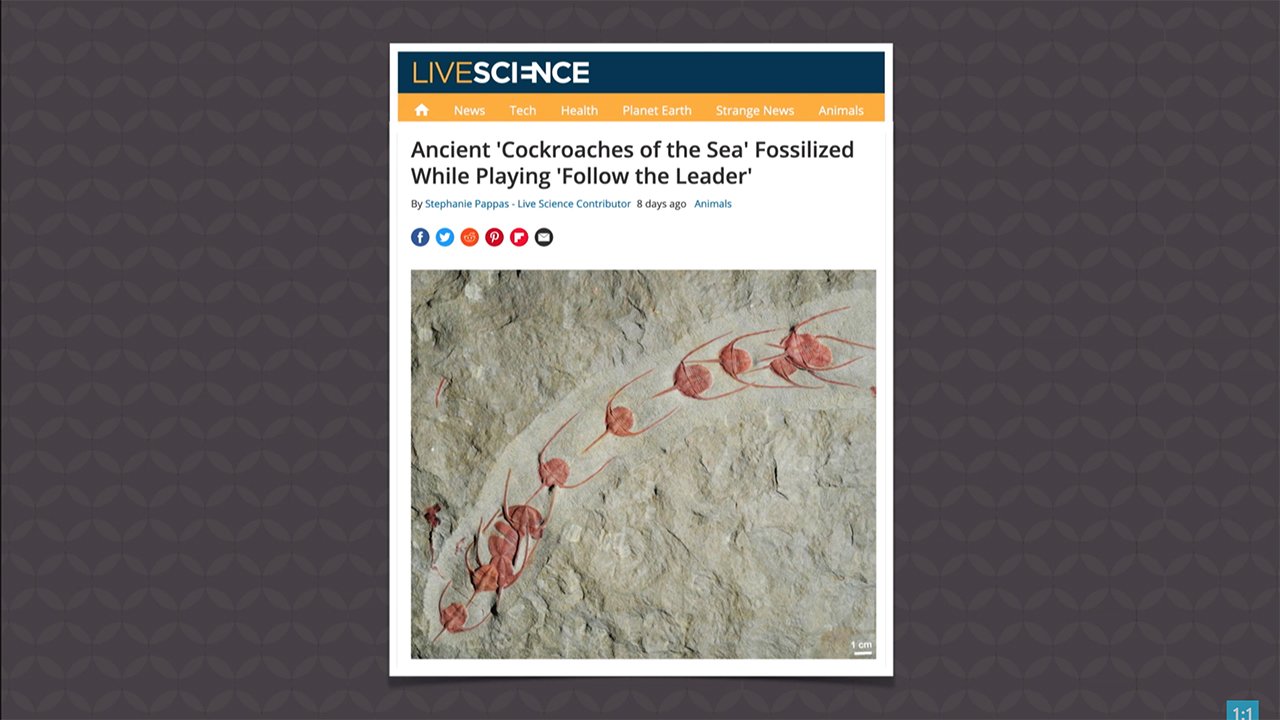 Scientists studying fossil deposits in Morocco recently announced a stunning new find—a series of trilobites (sea creatures, also called ancient cockroaches, now believed to be extinct), fossilized in a single-file line. It looks as if the trilobites were playing, “follow the leader.” That’s the observational evidence. But how to understand these fossils is a matter of interpretation. After all, the fossils don’t come with a tag on them telling you what happened and when. And your interpretation depends on your starting point.

The scientists studying these fossils approached the evidence from a naturalistic and evolutionary perspective. Since their starting point is a belief in evolution and millions of years, they interpret these trilobites as having lived 480 million years ago, during the so-called geologic period, the Ordovician.

They appear to be in the exact position they were before they were buried!

But they can’t explain these fossils the way evolutionists typically do: by appealing to slow and gradual processes. It’s obvious these creatures were fossilized rapidly. They appear to be in the exact position they were before they were buried! So, the researchers say,

The rocks around the trilobite fossils showed evidence of repeated, rapid storm deposits . . . The lined-up trilobites were probably buried instantly by an avalanche of sediment, possibly accompanied by the stirring-up of oxygen-poor waters that helped suffocate the animals rapidly.

The idea that slow and gradual processes, like we observe in the present, have shaped the earth through millions of years of history has been a standard belief in geology for centuries. But so many finds, such as this one, point to something different—catastrophe and rapid burial. Geologists are increasingly beginning to recognize this.

When we start with a biblical worldview, however, we have an entirely different way of interpreting this unique fossil. Trilobites were created by God on day five of creation week (they, and their complex behavior, didn’t evolve “very, very early” as the researchers claim). Trilobites thrived during the world before the global flood of Noah’s day. Being sea creatures and likely dwelling on the ocean floor, they were among the first creatures to be rapidly buried as the fountains of the great deep broke open and the floodwaters began to surge. These trilobites met their doom from an avalanche of sediment triggered by the onslaught of the flood.

These fossils give us a snapshot into the quiet ocean environment that was destroyed by the flood.

The Ordovician isn’t a geologic period some 480 million years ago. It’s a specific layer of flood sediment laid down shortly after the initial stages of the flood. These fossils give us a snapshot into the quiet ocean environment that was destroyed by the flood. The evidence we uncover today is totally consistent with such a scenario.

This item was discussed today on Answers News with cohosts Dr. Gabriela Haynes, Avery Foley, and Bodie Hodge. Answers News is our weekly news program filmed live before a studio audience here at the Creation Museum and broadcast on my Facebook page and the Answers in Genesis Facebook page. We also covered the following topics:

Watch the entire episode of Answers News for November 4, 2019.