“This is the ultimate cold case,” says Dayton’s Ron Fine, who after nearly forty years of fossil hunting has found a fossil that baffles the experts. Fine, a member of an association of amateur paleontologists known as the Dry Dredgers, spent all of last summer digging the huge fossil from a hillside in Kenton County, Kentucky, by Route 17 (in the next county over from Boone County, where the Creation Museum is located). Fine has found many fossils over the years, but nothing this big. “When I finally finished [excavating,] it was three-and-a-half feet wide and six-and-a-half feet long. In a world of thumb-sized fossils, that’s gigantic!”1 In fact, University of Cincinnati geologist Carl Brett says, “This is the largest fossil that has ever been extracted from this age of rock in this area or maybe even in the world.”2

“I knew right away that I had found an unusual fossil,” Fine says. “Imagine a saguaro cactus with flattened branches and horizontal stripes in place of the usual vertical stripes. That’s the best description I can give.”3 Fine put his “Humpty Godzillus” back together with “eight bottles of Super Glue”4 and presented his find to the Dry Dredgers in Cincinnati and then to the regional meeting of the Geological Society of America in Dayton.

Like Godzilla, it’s a primordial beast that found its way to the modern era.

Fine dubbed the big multilobed, “goose flesh” textured fossil “Godzillus.” “I picked that name to make it sound more scientific,”5 Fine says. “Like Godzilla, it’s a primordial beast that found its way to the modern era.” And although experts from Purdue and the University of Cincinnati think the fossil represents something biological, as University of Cincinnati geologist David Meyer says, “We just don’t know yet exactly what it is.”6 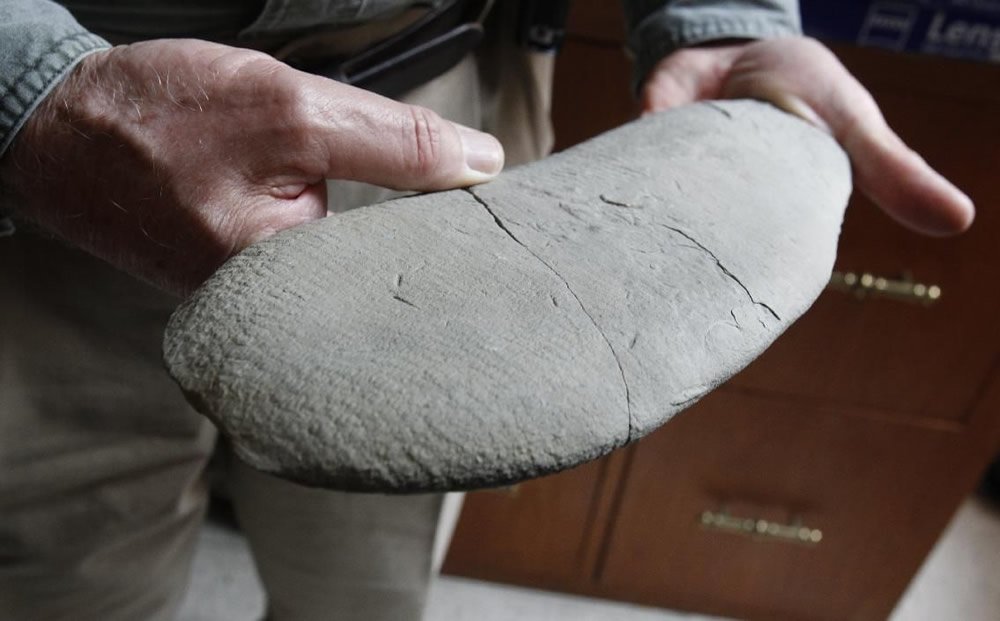 Lobe-shaped portion of the Godzillus fossil showing the texture paleontologists note distinguish this fossil as a biological specimen rather than a smooth nodule formed from mud and shale. (AP Photo/The Cincinnati Enquirer, Gary Landers) Image from Yahoo! News.

“The Dry Dredgers bring in some amazing finds,” agrees Brett, “but we’ve never been stumped.”7 Suggestions have included a sponge or a seaweed, and Meyer adds, “This thing is not boney. It is not a fish.” Meyer, co-author of A Sea without Fish: Life in the Ordovician Sea of the Cincinnati Region, explains, “Cincinnati was covered by a sea, 100 to 200 feet deep. Primitive shellfish lived in it. But no fish.”

Fine found the fossil in Upper Ordovician rock conventionally dated 450 million years old. The Cincinnati area is rich in fossils, particularly invertebrate sea creatures (like the trilobite fossils that are stuck onto Godzillus8), so much so that similar strata are called “Cincinnatian” elsewhere in North America. This region has intrigued fossil hunters since the 1790s, and the Dry Dredgers has just celebrated its 70th anniversary.9 According to Answers in Genesis geologist Dr. Andrew A. Snelling, this area’s Ordovician rock layer is “one of the most well stocked and uniquely well-preserved ‘fossil graveyards’ on the planet.”10 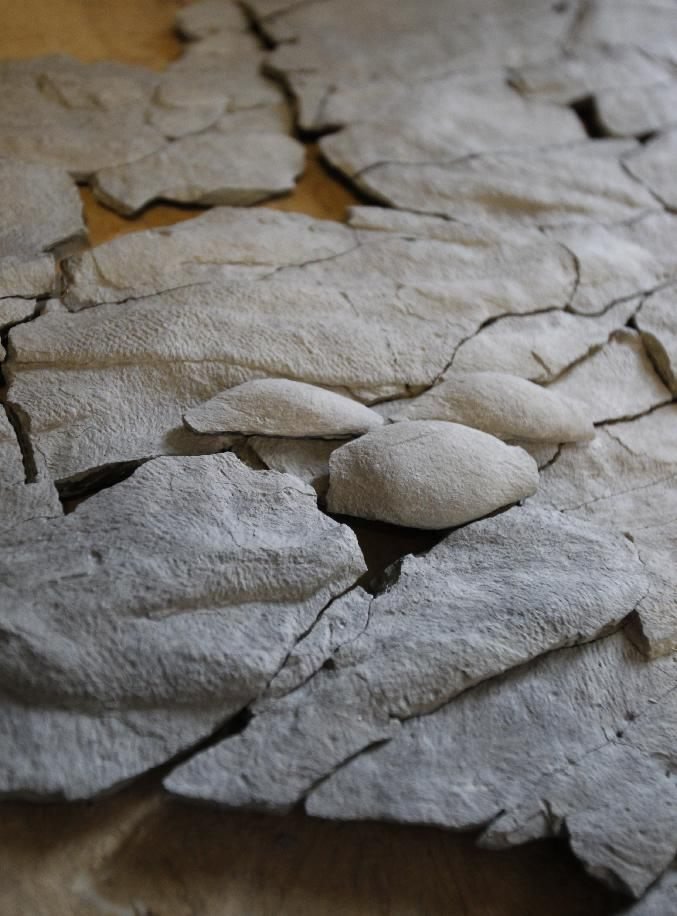 Our region’s Ordovician fossils, mostly extinct sea creatures, are preserved in alternating layers of limestone and clay mudstone. These fossils appear to have been ripped asunder and, like Godzillus, are commonly found near road cuts. Secular and creationist scientists agree the fossils in this area were subjected to violent storm conditions. Today, the Cincinnati area is 500 miles from the sea. Secular scientists speculate that the ocean rose such that this region was actually submerged near the coastline.

Biblical history of the global Flood explains these findings—the violent storms, the submergence of the whole region, the types of fossils, and the patterns of burial. Ordovician rock, like the Cambrian layer just below it, is deep in the geologic column and contains fossils of the first creatures to be torn from their habitats and catastrophically buried during the global Flood. As the fountains of the deep broke up (Genesis 17:1), volcanic activity would have generated violently surging ocean waters initially destroying and burying sea creatures living on or near the sea bottoms. These are just the sorts of creatures preserved in the Cincinnatian strata. The geologic column doesn’t tell us when these creatures evolved but rather when they died and were buried in the Flood. Much of the geologic column is a timeline of the tumultuous Flood year in earth’s history, not a timeline of the evolutionary emergence of life.