by Dr. Elizabeth Mitchell on May 22, 2014
Featured in Answers in Depth
Share:
Email Using:
Gmail Yahoo! Outlook Other

Sap-sucking insects get a nutritional leg up from bacterial symbionts.

Mutually beneficial symbiotic relationships abound in nature, and microbes are frequent participants. (Symbiosis between nitrogen-fixing bacteria and legumes is a familiar example.) Ten to fifteen percent of insect species have some sort of nutritional symbiotic relationship.1 The molecular mechanism by which aphids precisely regulate the nutritional product provided by the bacteria (endosymbionts) that live inside them displays the hallmarks of God’s grand design.

“We've identified the key regulator of this symbiosis,” explains Alex Wilson, senior author of the report published in Proceedings of the National Academy of Sciences. “It’s our first real insight into the mechanisms working at the interface of the host and symbiont.”

Several kinds of sap-sucking insects (such as aphids, weevils, and cockroaches) have specialized cells (bacteriocytes) in which they house symbiotic bacterial species. Living inside the cytoplasm of an insect’s bacteriocytes, these bacteria produce an essential amino acid the insect cannot make. And the insect produces an essential amino acid the bacteria cannot make.

“The question is whether the production of nutrients changes with supply and demand and if so, how it happens,” says Wilson. Investigators examining the relationship between pea aphids (Acyrthosiphon pisum) and the bacteria Buchnera aphidicola have now learned how aphids’ cells tightly control the metabolic activity of their bacterial endosymbionts. Another team of investigators has discovered genetic arrangements that support this symbiosis. 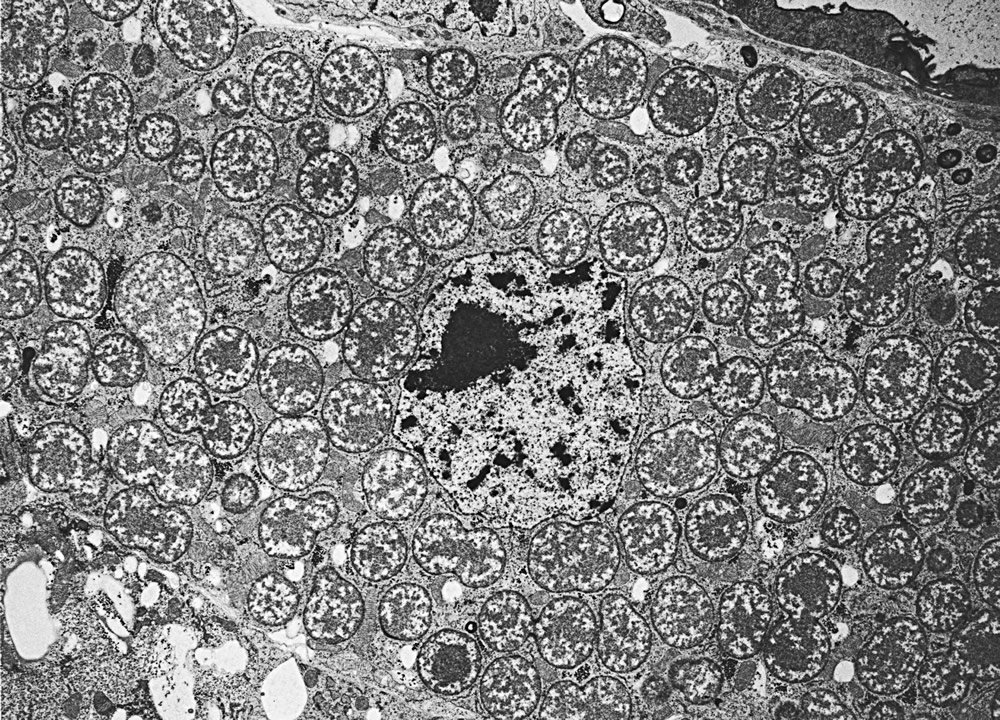 Many round, membrane-bound vesicles containing Buchnera bacteria are packed into the cytoplasm surrounding the nucleus in this aphid bacteriocyte. Image by J. White and N. Moran, University of Arizona/Fchaix, Wikimedia Commons.

Amino acids are the building blocks of proteins. Some amino acids can be chemically transformed into other amino acids, but an organism can perform this transformation only if it possesses the necessary enzymes and precursors. “Essential amino acids” are those amino acids that must be supplied to an organism through its diet or some other source because it cannot make them for itself.

The amino acid arginine is essential to the pea aphid. The aphid cannot manufacture arginine or obtain it from its diet of plant sap. The amino acid glutamine is essential to the bacteria Buchnera, which is not equipped to make it but can make arginine. The symbiotic relationship between Buchnera and pea aphids ensures a constant—but not excessive—supply of arginine to the aphid by regulating the supply of glutamine to an army of arginine-producing bacteria.

Buchnera is an obligate intracellular bacterium. Buchnera live and reproduce within aphid bacteriocytes. Many microbiologists suspect Buchnera are the mutant offspring of free-living bacterial ancestors that have lost the genetic information for many functions. The aphid host supplies the bacteria’s many needs, and the bacteria supply the nutritional deficiency in the aphid’s diet. Aphids pass bacteria-containing bacteriocytes to their offspring.

Aphid bacteriocytes house Buchnera in membrane-wrapped vesicles in their cytoplasm. The aphid membrane contains several molecules that can transport specific amino acids into the vesicles. “To our surprise,” says lead author Daniel Price, “the transporter is a key regulator of the factory production line.” 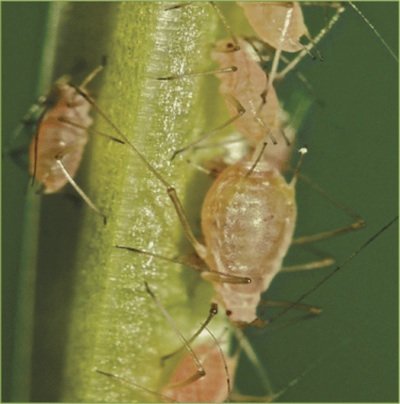 These pea aphids receive a steady nutritional supplement from Buchnera bacteria living inside their bacteriocytes. Image by Cchu9, via Microbe Wiki.

ApGLNT1’s amino acid binding sites fit not only glutamine but also arginine. When the aphid has plenty of arginine in its cells, arginine competes with glutamine for transport, diminishing the bacteria’s supply of glutamine. When arginine gets used up and needs to be re-supplied, the transporter molecule can freely ferry glutamine to the bacteria again. Thus the metabolic needs of the aphid dictate the synthetic activity of the bacteria, and both organisms thrive. Wilson says, “The system is simple and elegant.”

Another research group, whose report appears in the journal Molecular Ecology, has been searching for the genetic roots of sap-sucker symbiosis. They found that sap-feeding insects nutritionally reliant on endosymbionts have multiple copies of many AAT genes, and not just the ones on which they rely symbiotically for survival.3

Speculating on how these host-endosymbiont relationships evolved, lead author Rebecca Duncan says, “Given the extensive gene duplication of the amino acid transporter gene families that took place multiple times independently in sap-feeding insects, it makes sense that gene duplication might be important for recruiting amino acid transporters to mediate amino acid exchange between these insects and their symbionts.” Though not essential to symbiosis, duplication of AAT genes had adaptive value in sap-sucking insects, researchers suggest, believing evolutionary ancestry can be mapped accordingly.4

Several kinds of sap-sucking insects rely on endosymbionts, but the amino acids needed, the symbiont used, and other features vary. The researchers conclude this nutritional symbiosis strategy evolved in an early common ancestor of all sap-feeders and was replaced by convergently evolved variations. “Aphids, mealybugs, whiteflies and psyllids inherited sap-feeding from their common ancestor,” they write. “We thus assume that the common ancestor also had an amino acid-provisioning symbiont that was later replaced in three, or perhaps all four, lineages we sampled (explaining why each lineage has a different symbiont). Importantly, this common ancestor required that AATs mediate host/symbiont amino acid exchange.”5

The evolutionary researchers view the apparent gene duplications as a sort of smoking gun documenting the evolutionary past. Multiple gene copies, however, may simply be a design feature for these insects. And if multiple copies of AAT genes did result from duplication mutations, that still is not an example of evolving new information or a new function but simply making more of what the organisms already have—making an existing symbiotic mechanism more efficiently tuned to the organisms’ current needs.

The authors of these studies write, “Endosymbiotic associations have played major roles in evolution,”6 and “Symbiosis is well known to influence bacterial symbiont genome evolution and has recently been shown to shape eukaryotic host genomes.”7 Yet through all this, aphids remain aphids. Buchnera bacteria remain bacteria. No kind of organism becomes a new or more complex kind of organism. These kinds of insects have specific cells designed to shelter the needed bacteria. Nothing in these studies demonstrates how the bacteriocytes or any of the genomic information in either bacteria or insects came to exist in the first place. Understanding how a process works at the molecular level does not reveal its primordial origin.

The molecular mechanism by which a host insect can precisely regulate the amino acid supply it receives from the bacteria it houses is not only elegant but also heritable and therefore can be fine-tuned through natural selection. The genome of the pea aphid has many AAT genes, and several are expressed. And sap-sucking, bacteriocyte-dependent insects have multiple copies of many AAT genes, even some not associated with the insects current nutritional needs. Presumably, therefore, natural selection can act on the insect-microbe unit to fine-tune each variety of sap-sucking insect to the bacteria and nutritional peculiarities of its environment. But natural selection is not the same thing as evolution.

Furthermore, the role of endosymbionts in insect bacteriocytes does not lend support to the biologically untenable evolutionary claim that endosymbiosis gave rise to the mitochondria and chloroplasts in eukaryotic cells. (Read about the problems with this evolutionary notion in ““Non-Evolution” of the Appearance of Mitochondria and Plastids in Eukaryotes: Challenges to Endosymbiotic Theory” and “A Review of Mitoribosome Structure and Function Does not Support the Serial Endosymbiotic Theory.”)

Symbiosis in a Perfect World?

Symbiotic systems like this may be giving us a glimpse into the perfectly good world God created in the beginning (Genesis 1:31). Most microbes are, after all, helpful and not harmful. Without doubt microbes in the pre-Fall world would have filled their proper niches to maintain ecological balance and meet the needs of the living things God created. Only after sin’s curse entered our world did the processes by which microbes can vary lead some to become harmful.

“The natural symbiosis of microbes with other creatures is the norm,” writes Liberty University biology professor Dr. Alan Gillen in Answers Research Journal. “Therefore, we postulate that microbes were created as ‘biological systems’ with plants, animals, and humans on multiple days, as supporting systems in mature plants, animals, and humans.”8 Dr. Gillen explores this idea further in “The Genesis of Malaria,” showing how even the malaria-causing protozoan Plasmodium, before degenerating into a pathogenic parasite, may have symbiotically filled a niche in the original, pre-Fall, good world God created. While we cannot know the specifics of how everything worked in the pre-Fall world, learning more about the molecular mechanisms of symbiosis may help us realistically envision how God designed it to function.