This agile flyer scoots in and out of tight spots faster than any plane Boeing or Airbus ever dreamed of.

If you’ve ever taken a lazy stroll through a flower garden on a warm day, you’ve probably noticed the frenetic pace of insects as they forage through the floral smorgasbord. In comparison, air traffic at London’s Heathrow Airport during the 2012 Olympics was downright poky. No wonder. God’s fleet of aircraft includes thousands of zippy designs that can scoot in and out of tight spots faster than anything Boeing or Airbus ever imagined.

Among all this hustle-bustle of insect air traffic, one aerobat is particularly worth showcasing. It’s not a bee or wasp; in fact, it’s not even what you might expect during the daylight hours. This agile flyer darts so quickly in and out of its flowery bays that some people mistake it for a hummingbird. But it’s not a bird; it’s a moth, appropriately named the hummingbird hawk moth (Macroglossum stellatarum).

Compared to other butterflies and moths, hummingbird hawk moths have a particularly chunky thorax behind their heads. They need this big engine room to house the powerful, rapid-fire flight muscles that control their wings. This gives them a robust yet streamlined body—like a high-caliber bullet with a sporty fantail. 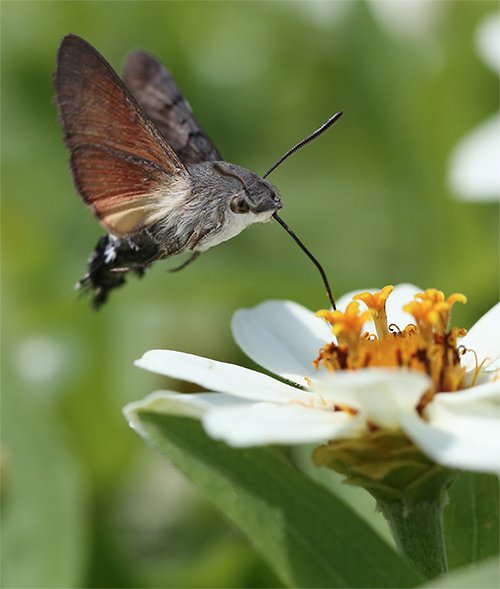 In addition to muscles for flapping, other muscles adjust the angle of their wings in flight so they can hover, fly forward, fly backward, or swing side to side. Researchers believe this side-slipping makes them a harder target for predators that sometimes lurk among the flowers.

Hovering is a pretty cool trick that few creatures can perform. Among nectar feeders, only certain bats, hummingbirds, hoverflies, and hawk moths can do it. Most butterflies and moths flutter and land on flowers to feed, but not so the hawk moths. They zoom between high-rise flowers, stop abruptly to hover or side-slip for a quick survey of the bouquet buffet, and then sip nectar from some delectable flower.

This kind of all-out flying is one of the most energy-demanding motor activities in the entire animal kingdom, and nectar is an ideal high-energy fuel to power it. But one or two flowers simply can’t meet the demand. A hummingbird hawk moth must sip from hundreds of flowers a day. Speed is of the essence, so it remembers which flowers it has visited. No time wasted double-dipping.

So they can drink nectar efficiently, God has equipped all moths and butterflies with a straw-like feeding apparatus called a proboscis. When not in use, it’s coiled up like a party horn under the head, but when they want to sip nectar, tiny muscles contract, unfurling it so that it can thread into a flower’s nectary. A sucking pump in the throat pulls the nectar up the proboscis into the digestive tract.

The Creator gave the hummingbird hawk moth keener eyesight than its nocturnal cousins (they rely more on smell). Its compound eyes are uniquely designed to maximize visual acuity for moving targets, such as a flower swaying in the breeze. To determine whether they have true color vision, researchers presented hummingbird hawk moths with two choices: flowers of one color with nectar and flowers of another color without it. The moths learned which color pays off, revealing that they not only have true color vision but can learn quickly.

Evolutionary scientists believe that over time and without any creative intelligence, variation and natural selection have led to similar forms in completely different animals. That is, organisms as different as birds and insects evolve a very similar shape and behavior if both are exploiting a similar niche. A good example of this supposed “convergent evolution” is the hawk moth and hummingbird.

They say that since both hawk moths and hummingbirds supposedly occupied similar niches for millions of years, similar selection pressures must have sculpted their fundamentally different body plans into a similar shape and behavior. Biblical creationists, on the other hand, believe that God purposely sculpted these fundamentally different creatures (insect and bird) for a similar lifestyle. Hovering and aerial agility require similar aerodynamic wings and bodies. Sipping from flowers requires a long proboscis or a long beak and tongue to tap the nectar. Radically different worldviews result in radically different interpretations, but the data is the same.

So next time you’re puttering in a flower garden, keep an eye out for these magnificent moths . . . and marvel at their Creator.

“O Lord, how manifold are your works! In wisdom have you made them all; the earth is full of your creatures” (Psalm 104:24). 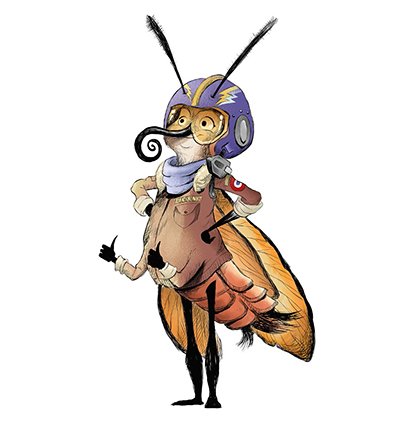 Like a fighter jet, a hummingbird hawk moth’s wings are narrow (compared to other moths) and designed for speed and maneuverability.

Their camo includes dapple-gray forewings with wavy stripes. When they are at rest on mottled surfaces like bark, this pattern hides their showy orange hind wings.

The temperature in a hummingbird hawk moth’s thorax exceeds 113ºF (45ºC) at peak activity. Most people would die from a fever of 109ºF, but 113ºF is ideal for their flight muscles.

This species’ proboscis is about an inch (25 to 28 mm) long—almost as long as its body. 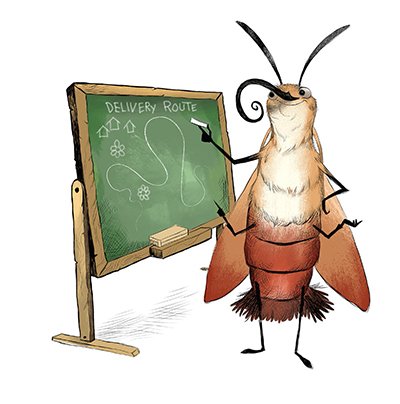 Their high energy demands for rapid flight require that they visit 100 to 500 flowers every day.

Dr. Gordon Wilson, Senior Fellow of Natural History at New Saint Andrews College, earned his PhD from George Mason University in environmental science and public policy. He holds a master of science degree in entomology from the University of Idaho.
Next Article Searching for a Sticky Solution