Termites: A House in Order

When they work together, these insignificant insects can accomplish significant things.

Few phrases strike dread in a homeowner’s heart quite like “You’ve got termites.” They can’t huff or puff, but some termite species can eat your house down. Despite these destructive capabilities, their wood-consuming abilities don’t seem to be a part of the Genesis curse. However, mankind’s adversarial relationship with certain termites probably is.

To borrow from the Apostle Paul’s turn of phrase in 2 Corinthians 10:10, “Their home-destruction abilities are weighty and powerful but their bodily presence is weak, and the size and shape amount to nothing.” Termites aren’t much to look at. Unlike the striking form of the praying mantis and the brilliantly colored lady bug, termites are drab insects that resemble six-legged Twinkies. How can a creature that looks so wimpy be so formidable?

What they lack in individual size and appearance, termites make up for in organization. Like some species of bees, wasps, and ants, termites are social. God gave them the ability to create highly sophisticated colonies featuring an organized caste system complete with division of labor. When they work together, these nondescript insects can accomplish amazing feats of engineering and architecture beyond the capacity of each individual.

At a certain time of year, day, and weather condition (depending on the species), swarms of winged males and females pair off and search for a place to start a new colony as the king and queen. (These are the only social insects that have a king. He founds the colony with the queen and mates with her for life.) After selecting a spot, they build a chamber and start a family. At first the female lays only one or two dozen eggs. Thanks to their offspring, the colony starts to expand.

As she grows to full size, the queen’s egg production increases to the tens of thousands. Though other social insects initially produce helpless larvae, termite youngsters (called nymphs) are anatomically similar to the adults, so they can get to work straight away. Also unlike other social insects that use only females in the colony, termites employ both males and females.

As the colony grows, the queen controls the caste structure by releasing specific pheromones. These chemicals spread as the colony feeds on each other’s feces. The chemicals prevent reproductive termites from forming prematurely and cause the queen’s offspring to become workers and soldiers to meet the colony’s needs. 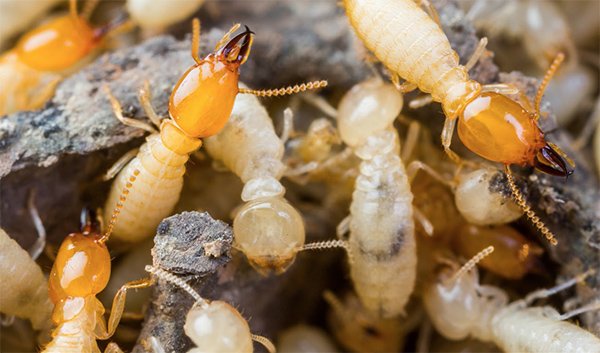 The Creator gave worker termites great multitasking abilities to care for the colony, including constructing and repairing the nest, finding food, and grooming and feeding the king and queen.

Soldier termites, the colony’s “homeland security,” defend the nest from intruders. Typical soldiers have big heads with a pair of formidable mandibles. Though great for defending the nest, the mandibles are so unwieldy that workers have to feed the soldier termites.

Certain termite species have a variety of special ops soldiers designed with anatomy and behavior to defend the colony. For instance, the nozzlehead termite has a pointy squirt gun on its head that sprays unpleasant chemicals at trespassers. Other soldiers have enormous heads that block entrances into the nest.

From Subterranean Nests to Skyscrapers

The architecture of a termite nest is as sophisticated as the colony’s social structure. The entire nest consists of a system of tunnels and chambers with highly regulated temperature, humidity, and cleanliness. Most nests in temperate regions are underground, but in tropical areas, many mounds rise well above ground level. Compared to the size of the residents, some termite mounds are skyscrapers, with the tallest ever discovered towering 42 feet (13 m).

Termites don’t travel in the open to find wood but instead build mud tubes (tunnels made of soil, wood, and termite saliva) when traveling from their nests to protect them from dehydration and predators. Once again, working together, termites are a relentless force.

In our sin-cursed world, unfortunately, nature and humans sometimes clash. But as a whole, termites aren’t so dastardly. Their appetite for organic matter is extremely valuable in many natural ecosystems. As part of nature’s clean-up crew, most termites feed on dead vegetation, fertilizing the soil while recycling decaying trees and plants. Their tunneling also aerates the soil, allowing water and nutrients to nourish plant life.

With a Little Help From Microbe Friends

Most termites don’t make the digestive enzyme necessary to break down fiber (cellulose), the main ingredient in plant cell walls. To help termites digest their fibrous food, the Creator set up a symbiotic relationship between termites and microbes. Specific microbes in the termite’s gut make cellulase, the enzyme that enables termites to break down cellulose into simple sugars (glucose) and digest it.

Whether working together as a colony or collaborating with microbes to digest dinner, termites offer a testimony to the power of cooperation and order. The next time you encounter termites, consider their divinely designed division of labor that can accomplish a task even as daunting as eating down a person’s domicile or building a termite skyscraper. Then call the exterminator. 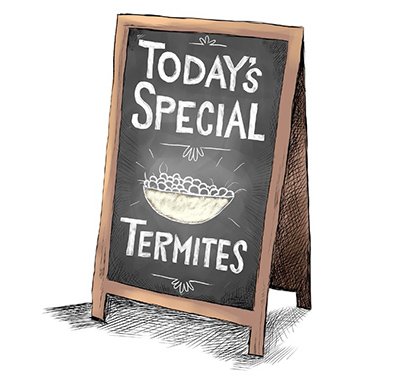 Some cultures eat termites as a great source of protein, fats, vitamins, and minerals.

Architect Mick Pearce designed a building in Zimbabwe to incorporate aspects of Zimbabwean termite mound architecture, which keeps the colony relatively cool in the tropical heat. This biomimicry greatly reduced the need for pricey air-conditioning.

In some species, old workers, called kamikaze termites, develop bluish pouches on their backs. When the insects are attacked, their pouches swell, burst, and shower assailants with a toxic copper-containing fluid.

When they sense a threat, soldier termites tap their heads against the sides of the tunnels, sending vibrations to warn the colony.

The queen lives up to 50 years. Sometimes she is so worn out that her legs and antennae break off. If she needs to be moved, this chore falls to the workers.

Scientists recently discovered an area the size of Britain in northeast Brazil that was dotted with up to 200 million large termite mounds (up to 10 feet tall and 30 feet wide and spaced 60 feet apart). To create these mounds, the volume of earth moved by a single species of termite is a staggering 2.4 cubic miles. 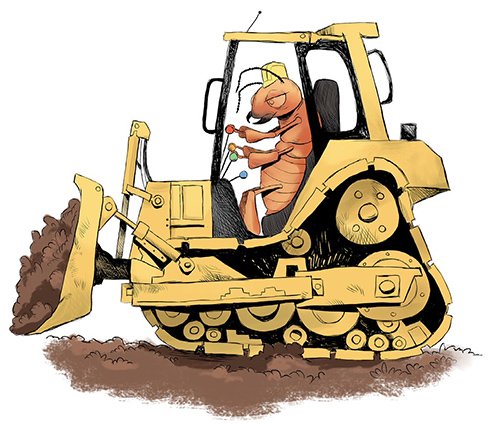 Dr. Gordon Wilson, Senior Fellow of Natural History at New Saint Andrews College, earned his PhD from George Mason University in environmental science and public policy. He holds a master of science degree in entomology from the University of Idaho.
Next Article Human Cell Regeneration—A Whole New You