Why Are Wasps So Evil?

If God is good, why are some creatures so bad?

Who hasn’t had a picnic ruined by angry, stinging wasps coming out of nowhere, or fled in terror when stumbling across a hornet’s nest in a treehouse or toolshed? Their vicious stings have earned them a nasty reputation, but the evil of wasps goes much deeper.

In the world of insects, known for some pretty terrifying predators, wasps are premier killers. Their sleek sportscar exterior (often black and yellow) belies a complex arsenal of anatomical, physiological, and behavioral designs to deal out death and destruction.

They won’t hesitate to kill their own kind either, and their life cycle includes larvae that eat creatures alive. Charles Darwin observed some of these horrific behaviors and asked himself a natural question: How could such evil exist if a good God created the world?

All in the Family

First, let’s define terms. We’re not talking about just a few familiar species commonly called wasps. A host of nasty insects fits this category. They belong in the large order Hymenoptera, which also contains bees and ants. We pretty much know an ant or bee when we see one. Wasps, however, are harder to define. In some ways, they’re the “others” of the bunch.

The large stinging wasps we encounter so often (hornets, paper wasps, yellow jackets, and others) represent only a small sliver of what entomologists call “wasps.” Most are tiny parasitoids, with tens of thousands of species spread over 40 families. (Parasitoids are like parasites in that they feed in or on their host. The difference is that they eventually kill their host.)

Because many of these are under a half an inch long, they can’t successfully sting humans (our skin is too thick and their stingers too short). So we don’t notice them.

“How nice; they can’t sting me,” we might say. But they still display an insidious lifestyle. Like their bigger cousins, their gruesome behavior highlights an evil that needs explanation.

What does evil, or more specifically “natural evil,” mean? Evil in this sense is not a willful, culpable disobedience against God. Natural evil—in the biological realm—refers to presentday arsenals of living creatures that are designed to deal out death and destruction in a post-fall world.

The War for Reproductive Rights

Before we examine why wasps are so evil, we need to recognize some of their most shocking behaviors so we can consider why they might exist today.

In our fallen world, creatures often must compete to survive. “Natural evil” includes behaviors to establish mating rights and claim limited real estate so animals can brood their young. Across the animal kingdom, many such sparring bouts occur so competitors can size up who is the dominant dude. Wasps take these battles to another level.

Death Match of the Fig Wasps

Take a fig wasp from the genus Pegoscapus (family Agaonidae) for example. Recently researchers observed that adult females will fight other females (a rarity in nature).

They mate inside the fig in which they hatch, where they develop to adulthood. Then they leave the fig and squeeze into another immature fig (a hollowish small capsule of tiny flowers) to lay eggs. It’s not roomy enough for more than one female’s brood. So if other females enter, violence ensues. Often heads roll . . . literally. The winner gets the fig to herself. The phrase “I don’t give a fig” does not at all apply here!

The fig she lays her eggs in will most likely be her grave. Her offspring hatch, feed, pupate, and metamorphose within the teensy flowers in this tiny chamber. The young adult males mate with the young females, then dig out, blazing a trail through which the females later escape. Upon exiting, the females find another unripe fig to start the cycle all over again.

Beheading may seem pretty gruesome, but there are thousands of species whose behavior makes fig wasps look pretty tame. The emerald jewel wasps (family Ampulicidae) are a case in point. They are known to attack cockroaches and temporarily paralyze their front legs with a well-delivered sting to a nerve network in the thorax.

Once its target is subdued, the wasp makes a more surgically precise sting to the brain. This subdues the cockroach so that it becomes a submissive zombie-like slave.

It gets worse (reader discretion advised). The wasp cuts off most of the roach’s antenna. The remaining stump serves as a sippy straw for the wasp to drink its blood to nourish itself. Snip and sip, so to speak.

As a lamb to the slaughter, the wasp guides the roach into a burrow, where the wasp lays an egg on its victim. To prevent the roach from wandering out or predators from wandering in, the wasp barricades the entrance with debris. The egg hatches, and the larva eats the roach alive. It starts with the outside for several days and then feasts on the innards in a careful way that keeps it alive. The wasp larva pupates (the pupa is the stage between larva and adult) within the roach’s abdomen and emerges as an adult wasp. 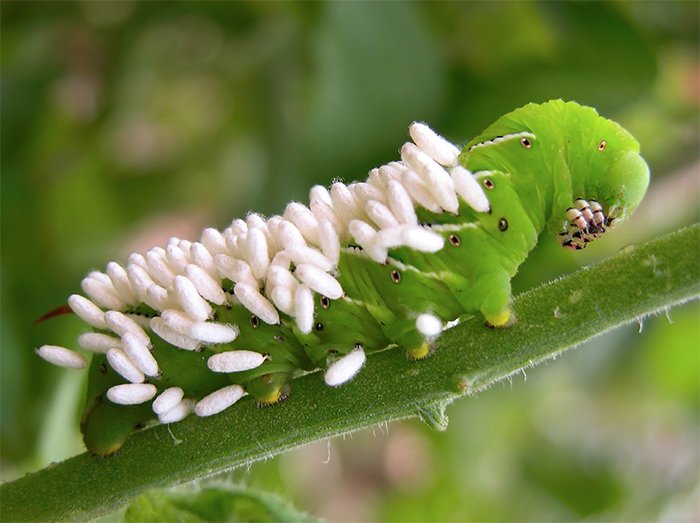 Some wasps lay eggs inside their favorite caterpillar. When they hatch, wasp larvae eat their way out and spin a cocoon on their unfortunate host.

A Source of Darwin’s Doubt

It’s no wonder that little blighters in the family Ichneumonidae (another family loaded with parasitoids) contributed to Charles Darwin’s loss of belief in a loving, personal God. He reasoned that a God who designed these grisly life cycles couldn’t be all good.

Darwin didn’t want to conclude that an all-powerful, holy God was ultimately responsible for designing these dastardly devils. This thinking motivated him to find a completely naturalistic explanation for all this carnage and gore. This way he could impersonalize that which he found repugnant. A higher Being would not be to blame.

We, too, need to grapple with these examples of natural evil, but not in the same way Darwin did.

The True Origin of Evil

We need to be anchored in God’s Word. On the one hand, we know that God is completely good: “God is light, and in him is no darkness at all” (1 John 1:5). On the other hand, there are thousands of predators, parasitoids, parasites, and pathogens (disease-causing microbes). Why?

The answer is simple. “The whole creation has been groaning together in the pains of childbirth until now” (Romans 8:22). Adam’s sin had negative consequences throughout the cosmos, including all living creatures. This includes thorns, thistles, violence, pain, suffering, and the death of man and animals (Genesis 3). His sin has plunged the entire creation into our current state of affairs. And we, his offspring, have contributed to the mess ever since.

These horrendous life cycles were not in existence at the beginning. They are part of God’s judgment.

In short, God is very good. Sin is very bad. God’s judgment against our sin is very good. These horrendous life cycles were not in existence at the beginning. They are part of God’s judgment. We and all creatures were vegetarians at first (Genesis 1:29–30), but then God stepped in. Romans 8:20–21 says, “For the creation was subjected to futility, not willingly, but because of him who subjected it, in hope that the creation itself will be set free from its bondage to corruption and obtain the freedom of the glory of the children of God.”

Thankfully, this is short-term. God uses evil as a warning and goad so that we will turn from evil and trust in his chosen Savior, Jesus Christ his Son. Those who turn from evil and trust him have a promise: “He will wipe away every tear from their eyes, and death shall be no more, neither shall there be mourning, nor crying, nor pain anymore, for the former things have passed away” (Revelation 21:4).

The gospel doesn't only redeem humans. God promises that he will transform the entire creation so that all evil is wiped out, including the wicked ways of wasps!

In addition to nasty stings, wasps have horrifying behaviors that remind us how sin has cursed our world. 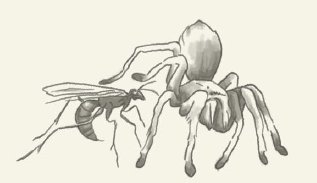 Spider wasps (family Pompilidae) specialize in hunting spiders. A well-aimed sting under the cephalothorax paralyzes the spider. The wasp then hauls the paralyzed spider back to her underground lair, where she lays an egg on the helpless spider. Her larva hatches and consumes the spider alive. 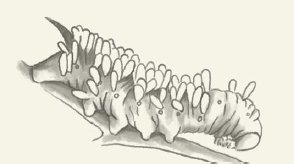 Many parasitoid wasps prefer to lay their eggs inside caterpillars. They hatch into grub-like larvae that consume the caterpillar from the inside out. At first, they avoid the vital organs so they can keep their host alive until time to exit. When they are ready to enter the pupal stage, they chew their way out of the caterpillar’s skin and spin their own cocoon. 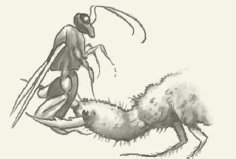 A parasitoid wasp in the family Chalcididae flies right into the jaws of death, that is, the pit of an antlion. Her strong hind legs hold the deadly jaws open while she lays an egg into the soft skin of the antlion’s neck. The larva hatches and eats the antlion from the inside out.

The Good Side of Bad

These behaviors sound nasty, and they are. But in our fallen world, the wasps actually serve to limit pests. In fact, farmers view these parasitoid wasps as good girls. They sometimes release these wasps intentionally to kill insect pests, a practice called biological control.

Dr. Gordon Wilson, Senior Fellow of Natural History at New Saint Andrews College, earned his PhD from George Mason University in environmental science and public policy. He holds a master of science degree in entomology from the University of Idaho.
Previous Article Out of . . . Asia? Next Article Ducks & Dinosaurs Together?