Ants have taken over the world, it seems, but they didn’t do it alone! One reason they’re so successful is their ability to communicate with each other—where to go, what to watch out for, how to help. 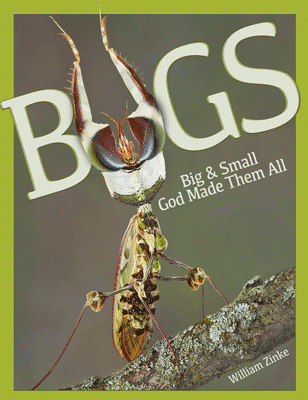 Within these vivid, full-color pages children will discover God’s purpose for creating insects.

The lone ant follows the path marked earlier by her companions. In her ceaseless search for food, she decides to veer off the trail and blaze a new path. Along the way, she releases a complex cocktail of chemicals to assure that, if her hunt is successful, other ants can locate her trail and lend a leg (or jaw).

Finding no sustenance, she hightails back to the trail junction and leaves another sign for her nest mates: “dead end.”

She tries another route, and this time she stumbles onto a live giant caterpillar that would feed many in her family. But it is too big to handle alone. Firing a dazzling array of chemicals into the air, like sounding a trumpet in the heat of battle, she summons reinforcements who soon arrive. Not only do they know how to find her but they also bring the necessary tools and personnel to kill the caterpillar and bring the body back to their nest. Ant communication is one of the great wonders of our Father’s world. The ants’ efficiency at foraging has even inspired business and computer problem–solvers who are looking for new techniques to come up with quality answers in the quickest time.1

To communicate is to impart information, via a “package,” from sender to receiver. The receivers must be able to decode the message and inform the sender whether they understand. In the example above the lone ant communicated her messages by way of chemical “packages.” The precise mixture of chemicals conveyed where she went, what she did, whether to follow, and how to help. Her colony mates had to decode her messages and act upon the information they received.

These advanced communication abilities enable several species of ants to maintain complex social organizations. Only a sampling will be mentioned below. So complex are some of these societies that they have been dubbed superorganisms. Their sophisticated networking abilities point to the Great Communicator, Jesus Christ, who designed creation to reflect His attributes (Romans 1:20). 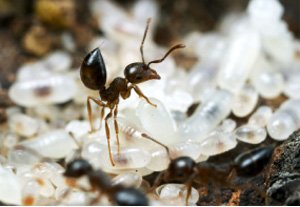 Alarm posture in an acrobat ant (Crematogaster emeryana), gaster held high and sting extruded. These ants don’t use their stingers to sting; rather, the organ is used as a brush to broadcast chemical signals to nestmates and to smear chemicals on attackers Photo © Alex Wild

Ants communicate with each other in a dizzying range of ways, but chemical signals (pheromones) appear to be the most important method.

The ant’s outer layer produces a suite of chemicals that perform many different but vital functions. These unique chemical combinations give each ant its own individual profile. Other ants can use their antennae to “profile” each individual, identifying its group membership, reproductive status, and job skills. The antennae are the ant’s primary decoding structures, used for profiling other ants, receiving warnings, and detecting both the direction and intensity of airborne scents.

Ants have many different glands to produce message-bearing pheromones. Nearly forty such glands have been discovered so far among various species. The ants employ these chemicals to produce messages for a variety of tasks, especially foraging.2

For example, ants will lay down either short-term or long-term memory trails, depending on the importance of the trail. The longevity of the trail is determined by the chemical left behind. For instance, Malaysian ponerine army ants have poison glands containing a pheromone that dissipates quickly. They use it to make short-term memory trails to call in reinforcements for a temporary job, such as recruiting nestmates to capture prey.

Some species divide the labor of laying down trails and foraging. Consider pharaoh’s ant workers. Some keep their antennae in continuous contact with the ground to detect long-term memory pheromones, while others follow behind them and maintain the trail by adding more chemical as needed. Still others are not responsible for trail marking but use the trails to forage for food.

Close behind chemical communication is tactile messaging. The most common touch behavior among ants is to stroke each other with antennae while passing each other on the trail. Like bees, ants employ other tactile displays, including waggling, jerking, and dancing, which seem to excite and recruit nest mates to perform various tasks. 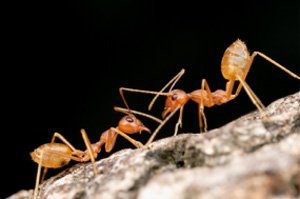 Friend or foe? These worker ants (Oecophylla longinoda) encounter each other and take a quick sniff of each other’s scent. Photo © Alex Wild

Scientists used to wonder whether ants could hear at all because they were unresponsive to loud human noises. For the past hundred years scientists have known that ants could detect ground vibrations but thought they couldn’t detect sounds from the air. Research now suggests that some ants can detect sounds from other ants through the air, using hair-like sensors at the tips of their antennae.3

Through their knees they are very adept at sensing vibrations from the nest, ground, and surrounding leaves. Using this sound, they can locate lost family members and prey. During a nest’s cave-in, leaf-cutter ants detected sound from their trapped family members, 2 inches (5 cm) deep, and started digging toward them.

It makes sense that ants can detect sound because they make sound. Many ants produce squeaky sounds by rubbing one body part against another (called stridulating). They also produce sounds by jaw slapping.

When a Malaysian ponerine army ant colony is ready to emigrate, workers will slap their jaws together. The sound is amplified by surrounding leaves and signals the colony to break camp. A carpenter ant species that builds silk nests in trees can sound an alarm when the nest is disturbed or when carbon dioxide reaches dangerous levels. One or two ants will tap their abdomens against the nest, causing others to do the same. The noise can be as loud as human conversation.

Some species ingeniously combine all three communication techniques—chemicals, touch, and sound—to convey their messages to cohorts. 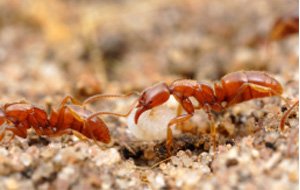 Follow the leader! The leading ant paves the way for a nestmate to follow. Notice the following ant’s antennae making tight contact with the abdomen of the lead ant. Photo © Alex Wild

In Scripture Jesus is called the Word (Lógos), which literally means “a thing to be said.” It emphasizes His standing as God’s supreme and definitive Voice in the universe. He is the communicator of the mind of God through the words of Scripture. He also created the universe and upholds it “by the word of His power” to ensure that His attributes are clearly seen in nature (see John 1:1; Hebrews 1:3; and Romans 1:20). So it should not surprise us to find highly complex societies of ants who communicate and cooperate to accomplish amazing tasks.

As a result of their cooperation and hard work, ants are more successful than almost any other creature in settling the earth. They may account for one-fifth of the total mass of all land animals. It is to the ants that God directs our attention: “Go to the ant, you sluggard! Consider her ways and be wise, which, having no captain, overseer or ruler, provides her supplies in the summer, and gathers her food in the harvest” (Proverbs 6:6–8).