Always on the Move

The next time you see a honeybee, take a moment to thank the Creator for His abundant provision through these amazing little creatures.

You’re not the only one who gets excited when a bee comes around. Every time a forager returns to the hive, bees gather ’round to hear her detailed report . . . it’s all in the dance. And when the time comes to find a new home, the excitement really begins.

At first it looked like an enormous cloud of flies, or the arrival of some kind of biblical plague. Fascinated, my coworkers and I watched through the window as tens of thousands of honeybees descended on a single tree in the parking lot. An hour later they seemed to disappear, but someone encouraged me to go outside, stand under the tree, and look up.

Nervous but curious, I obeyed.

Suspended in the branches was a large, writhing ball of bees, a bit bigger than a basketball, all clambering over each other. I had always been afraid of bees—and still my first instinct is to run away screaming—but that day awoke a lifelong desire to learn more about these busy little honey-makers and their complex society. Look closely, and you’ll find one of nature’s greatest testimonies to its Creator, collected and cultivated by cultures around the globe.

There are nearly 20,000 species of bees, the most recognizable being the western or European honeybee. Western honeybees live in huge colonies with a single queen, many male drones, and tens of thousands of female worker bees. The worker bee is the one that you and I are most likely to meet as she forages from flower to flower looking for that ideal food source.

Once our forager bee finds a new source of pollen or nectar, she returns to the colony to tell others about it. First, she waggles her body in a straight line; then she loops back in a semicircle to waggle again. This waggle dance is quite accurate at giving her fellow bees the direction and distance to the food source. It also describes the quality and type of food source. 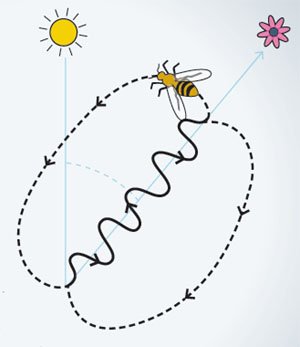 While the dance has been observed throughout history, it wasn’t until the twentieth century that Austrian scientist Karl von Frisch decoded its meaning. He was awarded a Nobel Prize in 1973 for his discoveries. Scientists now believe that smell plays a role in the dance as well.

But how did such behavior originate? The dance conveys information from one party to another in complex ways, almost like a language. It is hard even to imagine how such communication could have arisen over millions of years of slow change, since the entire colony has to understand the dance in order for it to be effective. It makes more sense to believe that a sovereign Designer created honeybees with the innate instinct to communicate with each other in this way.

At least once or twice a year, a honeybee colony produces new queens, and the old queen, together with more than half of the worker bees, takes off in search of a new home. This behavior is called swarming.

First, the bees will congregate in a temporary spot—for example, a tree in a parking lot—while they send scouts to find potential nesting sites. The scouts report their findings by another type of waggle dance, and eventually a new site is decided on.

There is no simple answer to the cause of swarming. It’s a complex behavior that is not necessarily triggered by one factor (for example, crowding alone does not always induce swarming). Nevertheless, swarming does help keep nests from becoming overcrowded, and it spreads the benefit of the bees’ pollination to the many plants and crops that depend on it.

Bees are extremely important to us, though we tend to take them for granted.

Seeing a bee swarm can be alarming (as I discovered that day many years ago), but swarming bees rarely sting, since they have no nest to protect. When God created the world, it was perfect. Bees probably pollinated flowers and produced honey as they do today. But after the first man sinned, the world was cursed, and defense became a necessary part of life. All honeybees possess the God-given instinct to protect their colony—even at their own peril, since stinging almost always kills them. But generally honeybees are docile and non-threatening if left alone.

Bees are extremely important to us, though we tend to take them for granted. Indeed, nearly one-third of the food on our plates comes from plants pollinated by bees, and honey and beeswax are multi-billion-dollar industries.

In 2006 a tragedy struck western honeybee society. For some still-unexplained reason, worker bees started leaving their colonies in droves, never to return. This Colony Collapse Disorder, which continues to decimate the honeybee population, reminds us just how much we depend on the efficient functioning of God’s little honey-gathering societies.

So next time you see a honeybee, take a moment to thank the Creator for His abundant provision through these amazing little creatures. Then run away screaming.