If you thought that all animals run away from forest fires, think again. The Melanophila beetle is one of many creatures that actually hunt for fires. In fact, its heat-sensing skills may offer insights into developing better weapons technology.

Forest fires can be devastating. The Great Fire of 1910—possibly the worst forest fire in U.S. history—roared through Idaho and Montana, wiping out as much as 3 million acres (12,000 sq km) of timber. Yet we now understand that these fires clear a path for new plants to flourish, thriving in the open sunlight and newly enriched soil. The benefits extend to the animal world, as well. In fact, some insects actually seek this charred landscape to begin their new families.

Of special interest is the Melanophila (mell-ann-AH-fill-a) beetle. Its name means “black-loving” because the beetle likes freshly burned, blackened wood, where the female lays her eggs. Often the charred wood is still hot and smoldering when the beetles arrive. This curious (and dangerous) behavior even has a name: pyrophilic or “fireloving.” Dozens of pyrophilic insect species, including certain species of flies and wasps, will often move into the devastated area along with the beetles.

Two design features help the Melanophila beetle find its way to a fire and avoid flying embers once it gets there. First, super-sensitive antennae can “smell” or detect just a few parts per billion of smoke particles in the air. This is equivalent to sensing a single drop of chemical in a 10,000 gallon (38 kl) swimming pool. A second feature is specialized infrared sensors that can detect heat radiation from distant forest fires.1 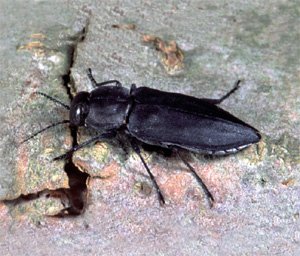 The Melanophila beetle has special infrared sensors that help it locate charred wood where it can lay its eggs.

These organs have caught the attention of the U.S. Air Force. Beetles have reputedly been observed flocking to fire zones miles away. Such sensitivity to infrared heat radiation, if true, would be far beyond the power of modern instruments. Not surprisingly, the U.S. military is interested in developing better ways to detect enemy aircraft and hide its own aircraft. So several research programs are seeking to understand and mimic the long-range infrared sensitivity of Melanophila beetles and similar insects.

The range of these sensors may prove to be hearsay, but the existence of such sophisticated sensory equipment still has much to teach us.2 Even in a fallen world that is far from perfect, we are constantly finding new examples of highly advanced planning and design throughout the creation. Creatures large and small inspire new products and suggest innovative solutions to technological problems.

Could it be that the Creator intended us to search out His workmanship for our own benefit? The command to subdue the earth, found in Genesis 1:28 and Job 12:7–10, surely includes the study and possible implementation of countless design features found in God’s manifold creation.

Dr. Don DeYoung is chairman of science and math at Grace College, Winona Lake, Indiana. He is an active speaker for AiG and has written nearly 20 books on Bible-science topics. Dr. DeYoung is currently president of the Creation Research Society with hundreds of members worldwide. His website is DiscoveryofDesign.com.
Previous Article Salvation Before the Cross Next Article Eve’s Legacy—Hope amid Despair