Real life zombies, like those in fiction, must ensure the spread and survival of the parasitic pathogen that creates them. If the parasitic hosts all go extinct, so will the parasites. Thus, through a tactical duel with death, carpenter ant colonies uniformly infected with a zombie-making fungus survive and thrive without succumbing to a zombie apocalypse. The colonies survive even as token members are driven to unnaturally position themselves where their spore-shedding corpses can rain down infectious fungal spores on their former fellows. 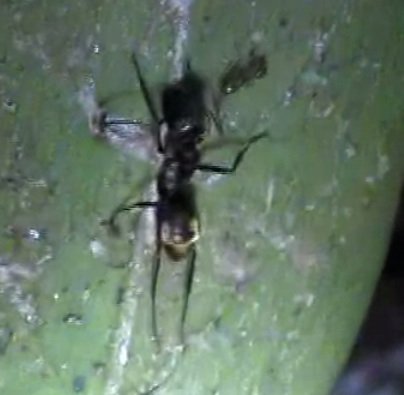 Several species of fungal parasites infect carpenter ants in the Brazilian rainforest, turning them into zombies. The fungus drives them to die where the fungus completing its life cycle in the ants’ bodies can rain destruction down on a new generation of victims, induced by means yet unidentified. This zombie carpenter ant climbed above an ant trail and clamped its jaws forever shut on the underside of this leaf, oblivious to other ants around (see video, linked). Once dead, its body will anchor spore-shedding stalks poised to drop on its former co-workers. Image: Screenshot from video at Wikimedia Commons

The parasitic fungus Ophiocordyceps camponoti-rufipedis is named1 for Camponotus rufipes, the species of carpenter ant it inhabits. Its doomed victims, in a zombie-like trance, climb to spots above busy ant trails near their nest and latch onto the bottom of a leaf. Normal ants do not do this.

“After climbing vegetation and biting the veins or margins on the underside of leaves, infected ants die, remaining attached to the leaf postmortem, where they serve as a platform for fungal growth,” explains Penn State researcher Rachel Loreto, lead author of a new field study of the ants published in PLoS ONE.

Once the climbing dead latch themselves to their final resting place, the fungi in them complete their life cycle. A long stalk (called a stroma) grows out through each zombie ant’s dead body, spores develop in its large round head (called the ascoma), and, about 7–10 days after the ant’s death, infectious spores fall on foragers making their way up and down the trail.

Unlike some parasites, this fungus requires its host’s death to complete its life cycle and spread its spores. That would seem to be a self-defeating process, for how can the parasitic fungus continue to live if it must destroy the only vehicle through which it can reproduce?

Penn State researchers discovered that the inherent limitations of the fungus’s ability to reproduce work to its advantage. Because the fungus is strictly limited in the locations where it can disperse its spores, life in the ant colony can go on as usual while a few hapless foragers are siphoned off during their daily ventures.

Every carpenter ant nest examined by the Penn State research team in the Brazilian rainforest Research Station of Mata do Paraíso was infected by the fungus. An average of 14.5 fungus-infected ants appeared over the trails near each colony every month.

“We limited our survey to the immediate area surrounding the nest because this is the zone the ants must walk through to leave and return to the colony,” Loreto explains. “To better understand the path workers ants took, we measured and mapped in 3-D the trails formed by the ants, and that allowed us to determine spatial location of potential new hosts, which would be on the foraging trails.” 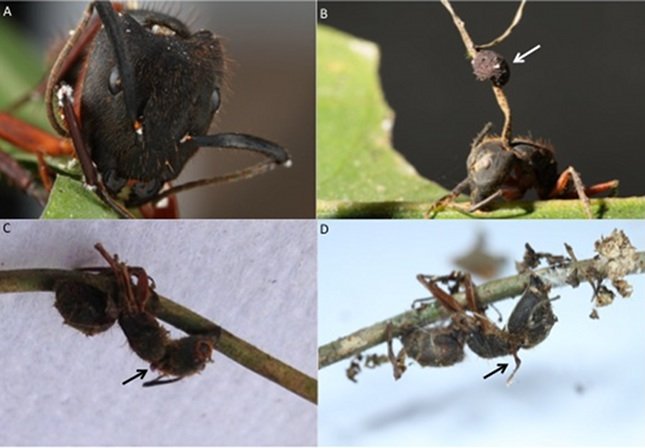 The spore-forming stalk (arrows) of the fungus Ophiocordyceps camponoti rufipedis was unable to develop and sprout from this carpenter ant’s body until the ant had obeyed its instructions to climb above an ant trail and latch itself under a leaf, as in B. Once the ant had, like a zombie, formed a suitable platform for the fungus to complete its life cycle, the fungal spores inside the ant combined to produce a stalk topped by the large round ascoma in which a new batch of infectious ascospores develop. They are ejected when mature and fall down upon foraging ants below. Image from the original research paper: Loreto, Raquel G.; Elliot, Simon L.; Freitas, Mayara L. R.; Pereira, Thairine M.; Hughes, David P. (2014): Long-Term Disease Dynamics for a Specialized Parasite of Ant Societies: A Field Study. Figure_S1.tif. PLOS ONE, doi: 10.1371/journal.pone.0103516.s001. Retrieved 17:28, Oct 15, 2014 (GMT).

The trails bring a steady parade of new victims beneath the spore-dripping cadavers. “What the zombie fungi essentially do is create a sniper's alley through which their future hosts must pass,” entomologist David Hughes says. “The parasite doesn't need to evolve mechanisms to overcome the effective social immunity that occurs inside the nest. At the same time, it ensures a constant supply of susceptible hosts.”

Though 100% of the colonies were not only infected but re-infected regularly, none of the colonies collapsed from the fungal epidemic! Zombie apocalypse á la ant just didn’t happen. What was it that staved off all-out disaster for the ants? Did the ants’ defenses save them?

“Previous laboratory studies have shown that social immunity is an important feature of insect societies, especially for ants. For the first time, we found evidence of social immunity in ant societies under field conditions,” Hughes explains. Entomologists define social immunity as “collective actions to prevent and control diseases.”2

Most of the time, healthy ants removed and destroyed the infected ant bodies the team placed in the nests. But while these social insects clearly worked together to eradicate the threat, it was not their collective action that spared the colonies! Some other factor was at work.

Though the zombie ants adorned the trees near the trails as predictably as Christmas lights in December, no fungus ever completed its life cycle and popped a spore-shedding stalk up out of an ant’s dead body while inside a nest. Neither those dead ants that the healthy ants missed nor infected ants the researchers placed in empty nests ever sprouted stalks! Infected ants placed high in the drier rainforest canopy, far from the ant trails, also failed to shed spores and spread the fungus. Infected ants placed on the forest floor likewise lay dormant, sprouting no spore-producing apparatus.

“Ants are remarkably adept at cleaning the interior of the nest to prevent diseases,” Hughes says. “But we also found that this fungal parasite can't grow to the stage suitable for transmission inside the nest whether ants are present or not. This may be because the physical space and microclimate inside the nest don't allow the fungus to complete its development.”

Spores only develop in and spread from ants properly positioned strategically above ant trails near nests. This limitation on the fungi’s reproductive fitness prevents the mutually assured destruction that would ensue if it were capable of rampaging aggressively inside the nest.

How long has this been going on? Well, fossilized leaves from Eocene rock in Germany carry marks exactly like those these ants make. That makes this “fossilized behavior,” according to evolutionists, 48 million years old.3 Of course, we know that no rock on earth is actually that old, the earth being only about 6,000 years old. Much of the fossil record is a testament to the order of burial of organisms as their habitats were destroyed during the global Flood. The sudden and catastrophic burial of an ant-bitten leaf places that episode of “fossilized zombie behavior” only about 4,350 years ago. Similarly, another parasite—a mosquito with a belly full of blood4—was found in Eocene rock in Montana. Clearly parasitic behavior had developed by the time of the global Flood.

Just how long before the Flood parasitism and gruesome behavior like this zombie recruitment began we cannot know. While the research team assumes the answers lie in evolution, they make no claim to know how the parasite came to exist or became a parasite in the first place nor how ants and ant society came into being. They write, “There is no doubt that social immunity is an essential component of the social insects life style, but we suggest the parasites may have evolved to avoid it or exploit some of its components.”2

No new kinds of animals or parasites are emerging, only varieties of those that already exist.

Natural selection rewards the most effective dispersal strategies for many parasites. Other examples include a virus that converts gypsy moths to obedient viral-spreading zombies and the parasitic protozoan Toxoplasma gondii that induces infected rats to seek out cats so that it can complete its life cycle in the feline gut. Parasites that happen to infect their unfortunate hosts in ways that impair neural or hormonal control of behavior to serve the needs of the parasite are naturally selected to survive through successful dispersal. Overly aggressive parasites that kill all their hosts would go extinct.

Yet in all this, no new kinds of animals or parasites are emerging, only varieties of those that already exist. Nothing here smacks of molecules-to-man evolution—just fungi remaining fungi, albeit it likely defective ones unable to survive without their parasitic behavior. And ants remain ants, instinctively disposing of dead ants—a typical ant behavior—even though in this case their actions are ineffectual and irrelevant.

Genesis says that God called His Creation “very good.” The suffering and death that haunt our world entered it in the wake of man’s sinful rebellion against God.  Therefore we can be confident that fungi, viruses, bacteria, flatworms, protozoans, and insects fulfilled helpful, not harmful, roles in that original world. Since the Fall, a combination of mutations, horizontally transferred genes, environmental changes, and host changes have produced many harmful organisms in addition to those that fulfill vital ecological roles. Zombie-making parasites show how natural selection has functioned in this fallen world.

Previous Article Timely Tale Tells Why Leaves Turn, Or Does It? Next Paper Review of the Lecture “Evolution & Creation: Conflicting or Compatible?”